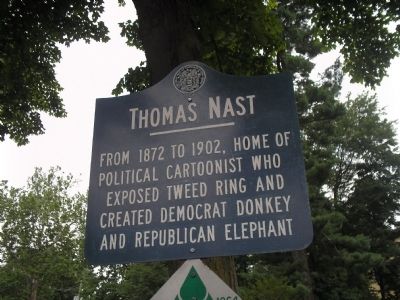 By Bill Coughlin, July 9, 2008
1. Thomas Nast Marker
Inscription.
Thomas Nast. .
From 1872 to 1902, home of political cartoonist who exposed Tweed ring and created Democrat donkey and Republican elephant.. . This historical marker was erected in 1964 by State of New Jersey. It is in Morristown in Morris County New Jersey

From 1872 to 1902, home of
political cartoonist who
exposed Tweed ring and
created Democrat donkey
and Republican elephant. 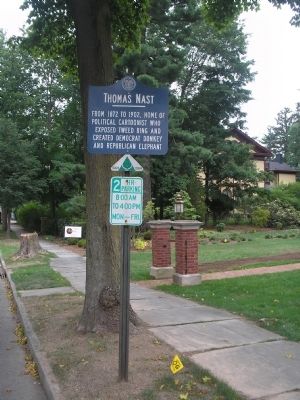 By Bill Coughlin, July 9, 2008
2. Marker on MacCulloch Avenue
(approx. 0.2 miles away); Dr. Lewis Condict House (approx. ¼ mile away). Touch for a list and map of all markers in Morristown. 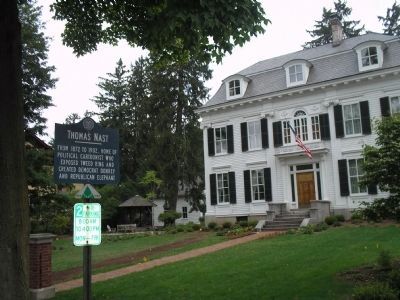 By Bill Coughlin, July 9, 2008
3. Thomas Nast Marker and Home
Thomas Nast was one of America’s most noted political cartoonists. Best known for his campaign against New York City’s “Boss” Tweed, Nast was also responsible for the creation of the elephant and donkey symbols for the Republican and Democrat parties, and the “modern” image of Santa Clause. 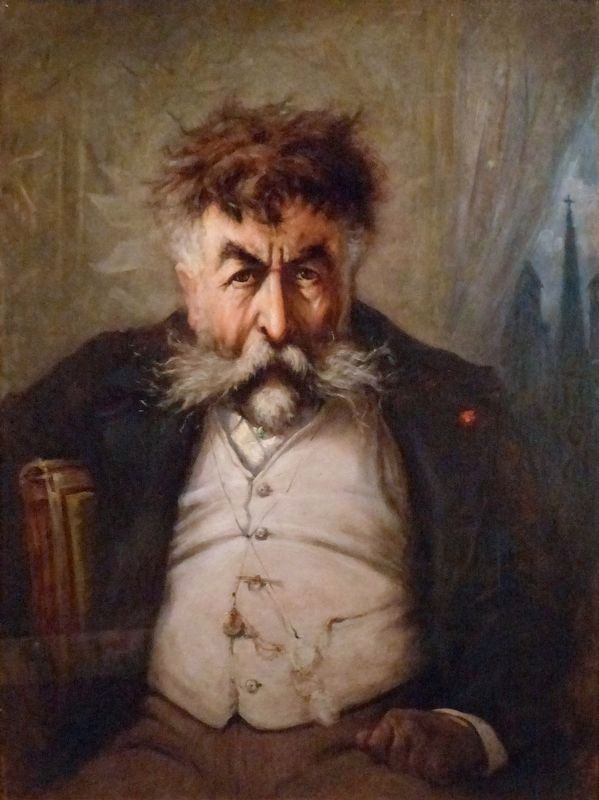 “Born in Germany, Thomas Nast (1840-1902) immigrated to New York in 1846. Nast’s gifts for illustration and social observation found ready use in national mass-circulation news magazines that did not yet have means to publish photographs. He published more than three thousand drawings, primarily in Harper’s Weekly between 1862 and 1885.

Nast favored Union-affirming policies and enjoyed the relative autonomy to express his political views. His early cartoons skewered the corrupt regime of New York City’s William Marcy ‘Boss’ Tweed. Nast went on to popularize the elephant and donkey as symbols of the Republican and Democratic parties, respectively.

Nast may have painted this self-portrait around 1884, when he lost his fortune in a Wall Street Ponzi scheme. It is perhaps a self-caricature. He renders himself with a furrowed brow, collapsed into a chair. An open drape reveals New York’s Trinity Church, and the foot of Wall Street.

Out of favor with his editor, Nast left Harper’s Weekly in 1887. He later joined the Democratic National Committee as a contract cartoonist but never recovered a national audience or financial position.” – Smithsonian Institution. 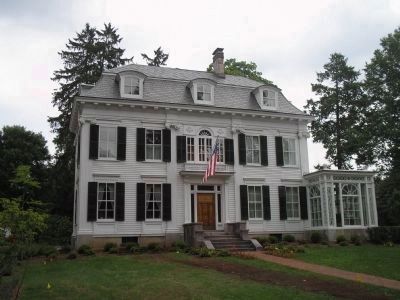