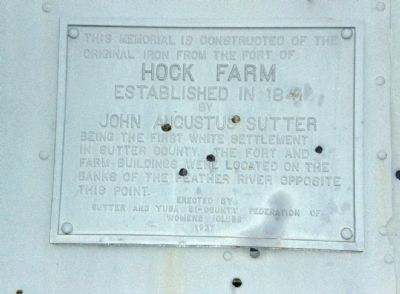 By Andrew Ruppenstein, June 21, 2008
1. Hock Farm Marker
Inscription.
Hock Farm. . This memorial is constructed from the original iron from the fort of
Hock Farm Established in 1841 by John Augustus Sutter. Being the first White settlement in Sutter County. The fort and farm buildings on the banks of the Feather River opposite this point. . This historical marker was erected in 1927 by Sutter and Yuba Bi-County Federation of Womens Clubs. It is in Yuba City in Sutter County California

This memorial is constructed from the original iron from the fort of
Hock Farm
Established in 1841
by
John Augustus Sutter
Being the first White settlement in Sutter County. The fort and farm buildings on the banks of the Feather River opposite this point.

Erected 1927 by Sutter and Yuba Bi-County Federation of Womens Clubs.

Topics. This historical marker is listed in this topic list: Settlements & Settlers. A significant historical year for this entry is 1841.

Other nearby markers. At least 8 other markers are within 6 miles of this marker, measured as the crow flies. Sutter's Hock Farm (approx. one mile away); Marysville Migrant Labor Campsite (approx. 2 miles away); Arboga Assembly Center (approx. 2.2 miles away); Masonic Temple Corner Stone (approx. 5.9 miles 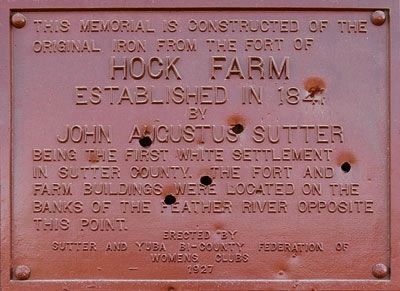 By Alvis Hendley, October 28, 2011
2. Hock Farm Marker
Updated photo of the marker at the intersection of Garden Highway and Messick Road. The facade has been painted glossy red and is no longer propped up, but the bullet holes remain.

More about this marker. This is a peculiar memorial, standing ghost-like as a reminder of something long vanished. The text on the marker indicating that it had been built from the remains of a fort on the Hock Farm is somewhat at odds with various historical accounts, which would have that the metal building was a storehouse. But the distinction between a fort and a storehouse may be much greater now than it would have been back then.

The marker is on the memorial facade, to the right of the door.

Regarding Hock Farm. John Augustus Sutter is famous for being, in essence, the father of Sacramento, having established a trading post, and then fort and settlement, within what are now that city's limits. In 1841 he established the Hock Farm, roughly a day's horseback ride north of Sacramento. It was the first large-scale agricultural development in Northern California, with vineyards, orchards, and livestock. After gold was discovered at Sutter's Mill in Coloma in January 1848, a gold rush of epic proportions was unleashed. The ensuing chaos and deteriorating conditions at his fort in Sacramento led Sutter to retire, with his family, to the Hock Farm in 1850. Floods destroyed much of the farm in 1862, but he continued to live there until a fire in 1865 burned down his house, after which he and his family moved to Pennsylvania. Sutter died in 1880.

Accounts vary as to the meaning of "Hock" in the farm's name, as it is either thought 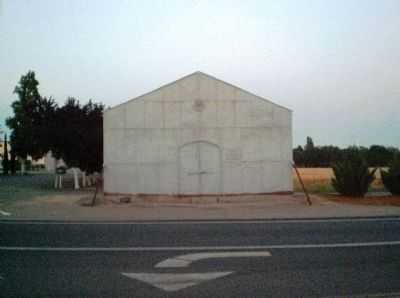 By Andrew Ruppenstein, June 21, 2008
3. Hock Farm Memorial
to be derived from the German word "hoch", meaning "high" (or in this sense, northwards) or be a corruption of the name of a former Native American settlement which was in the vicinity.

Other than the metal panels that make up the memorial, nothing more remains to be seen of the Hock Farm. The former farm site is on private land and currently planted in orchards.

Related marker. Click here for another marker that is related to this marker. A marker at the site of Sutter's Mill.

Additional commentary.
1. Update
I was at the marker site July 17, 2011 and found your picture to be quite old. The metal building now has all four sides erected and painted. There is another marker on stone erected 100 feet on Hwy 99 just before the turnoff.
— Submitted July 18, 2011, by Danielle E. Cossu-Ferrara of Chico, California.
2. Sutter's Hock Farm, house
Sutter's house 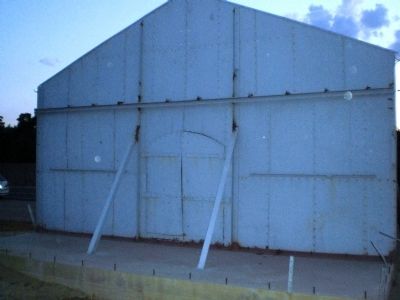 By Andrew Ruppenstein, June 21, 2008
4. Hock Farm Memorial - Rear View
The memorial would seem to have undergone some maintenance within the last several years, as the poured concrete foundation is relatively new-looking.
remains, with the second floor removed. It is located next to the levee.
— Submitted October 17, 2014, by Francis E. Coats of Yuba City, California. 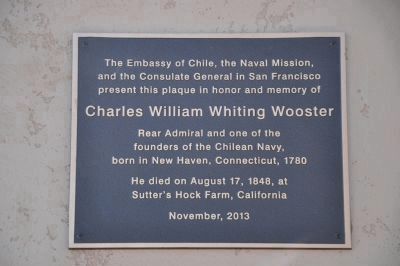 By Michael Kindig, April 5, 2014
5. Charles William Whiting Wooster Marker
The Embassy of Chile, the Naval Mission,
and the Consulate General in San Francisco
present this plaque in honor and memory of

Rear Admiral and one of the
founders of the Chilean Navy,
born in New Haven, Connecticut, 1780 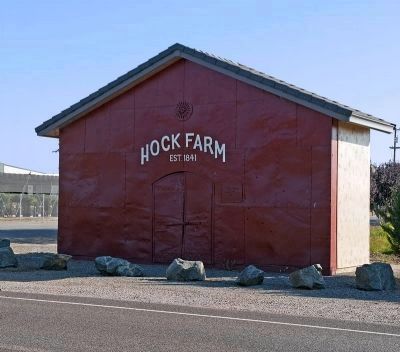