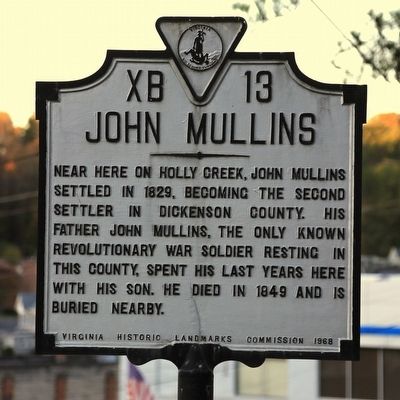 By J. J. Prats, October 16, 2015
1. John Mullins Marker
Inscription.
John Mullins. . Near here on Holly Creek, John Mullins settled in 1829, becoming the second settler in Dickenson County. His father John Mullins, the only known Revolutionary War soldier resting in this county, spent his last years here with his son. He died in 1849 and is buried nearby. . This historical marker was erected in 1968 by Virginia Historic Landmark Commission. It is in Clintwood in Dickenson County Virginia

Near here on Holly Creek, John Mullins settled in 1829, becoming the second settler in Dickenson County. His father John Mullins, the only known Revolutionary War soldier resting in this county, spent his last years here with his son. He died in 1849 and is buried nearby.

Topics. This historical marker is listed in these topic lists: Settlements & Settlers • War, US Revolutionary. A significant historical year for this entry is 1829.

Location. Marker has been reported permanently removed. It was located near 37° 8.787′ N, 82° 27.399′ W. Marker was in Clintwood, Virginia, in Dickenson County. Marker was on Dickenson Highway (Virginia Route 83) just east of McClure Street and Ida Lane, on the right when traveling east. Touch for map. Marker was in this post office area: Clintwood VA 24228, United States of America. Touch for directions. 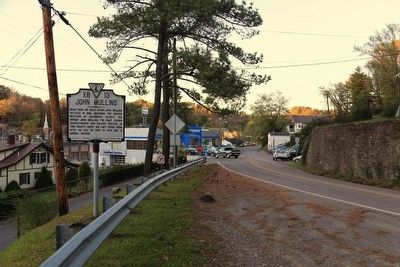 Also see . . .  The Mullins Family in Dickenson County. 1974 article by Elihu J. Sutherland in Historical Sketches of Southwest Virginia.” Excerpts: “John Mullins ... lived on the Toe River in Yancy (now Mitchell) County, North Carolina. Family tradition has it that his home was on the route Col. William Campbell and his ‘Redcoats,’ and that John Mullins joined the little force of patriots and went on to the glorious victory at Kings Mountain on that fine day in October, 1780. He reared a family in North Carolina, among his children being three sons: James, Solomon and John. After these sons came to the waters of Pound River in Southwestern Virginia, he followed them and spent his last days with his son John in Holly Creek Valley at what is now the town of Clintwood, Virginia. His descendants called him ‘Great-Grandsir.’ He died in 1849, and was buried near where John 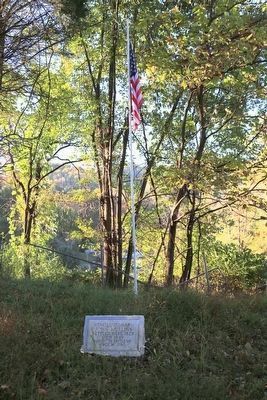 By J. J. Prats, October 17, 2015
3. “Revolutionary John Mullins
Settled Here 1829, Died 1849
Fought in Battle of Kings Mountain, 1780”
Powers now resides in Clintwood. The absence of any ready made coffins or lumber made it necessary to bury him in a crude coffin finished from a poplar log.”
. . .
“John Mullins, born 1784, died at Clintwood, Virginia, September 19, 1859. He and his wife lie buried on a slope about three hundred yards west of the Courthouse. He was a farmer and stock raiser. His first home was on Toe River in Yancy County, North Carolina. Learning of the cheap land and good hunting conditions on the waters of Pound River, he came to investigate. He became dissatisfied, and returned to his old home. He could not, however, get his mind off the great possibilities of this new country, so in the spring of 1829 (?) He brought a drove of hogs, cattle and horses to Holly Creek, and accompanying him were his two sons David and Isaac, and his daughter Mary, aged 14 years. They moved into a log cabin previously erected by an old hunter, William Broadwater, and which stood near the present (1932) residence of Dr. E. L. Phipps in the town of Clintwood. Here they grazed their stock on the pea vine and other luxuriant vegetation which they grew in the valleys and on the hills. They also put out and cultivated a crop. In the fall, Mr. Mullins and his two sons returned to their old home on the Toe River to bring back the remainder of the family and their worldly goods. Little Mary Mullins heroically stayed alone in the cabin for fourteen days until her relatives returned. She cared for the livestock and the crop. Her nearest neighbor was at least twelve miles away through a trackless forest, which was filled with fierce bears, wolves, panthers, and other varmints. These wild beasts often came to the cabin door at night and fought the dogs in the yard. Mr. Mullins became the owner of several thousand acres of the best land in Dickenson County, on which he settled his children as they married. After a few years he built a new house near the present Cumberland Chevrolet Garage (1932), near which may still be seen an old dead topped cedar which Mr. Mullins planted in his yard.” (Submitted on November 19, 2015.)
Credits. This page was last revised on September 28, 2019. It was originally submitted on November 19, 2015, by J. J. Prats of Powell, Ohio. This page has been viewed 452 times since then and 14 times this year. Photos:   1, 2, 3. submitted on November 19, 2015, by J. J. Prats of Powell, Ohio.

Editor’s want-list for this marker. Replacement for this marker, also numbered XB-13, with new title “Mullins Family” and new text. May not be at this exact location. • Can you help?
Share This Page.