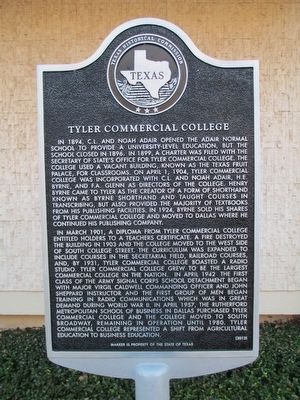 In 1894, C.L. and Noah Adair opened the Adair Normal School to provide a University-level education, but the school closed in 1896. In 1899, a charter was filed with the Secretary of State's office for Tyler Commercial College. The college used a vacant building, known as the Texas Fruit Palace, for classrooms. On April 1, 1904, Tyler Commercial College was incorporated with C.L. and Noah Adair, H.E. Byrne and F.A. Glenn as directors of the college. Henry Byrne came to Tyler as the creator of a form of shorthand known as Byrne shorthand and taught courses in transcribing, but also provided the majority of textbooks from his publishing facilities. In 1924, Byrne sold his shares of Tyler Commercial College and moved to Dallas where he continued his publishing company. 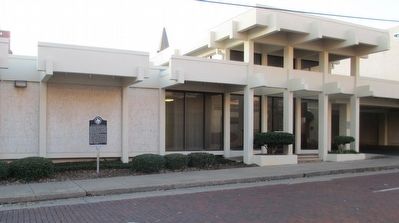 By Randal B. Gilbert, December 11, 2015
2. Tyler Commercial College Marker
The marker is at the site of the building, which was razed in 1968.

Click or scan to see
this page online
College grew to be the largest commercial college in the nation. In April 1942 the first class of the Army Signal Corps school detachment began with Major Virgil Caldwell Commanding Officer and John Sheppard Instructor and the first group of men began training in radio communications which was in great demand during World War II. In April 1957, the Rutherford Metropolitan School of Business in Dallas purchased Tyler Commercial College and the college moved to South Broadway, remaining in operation until 1980. Tyler Commercial College represented a shift from agricultural education to business education.

Topics. This historical marker is listed in this topic list: Education. A significant historical year for this entry is 1894. 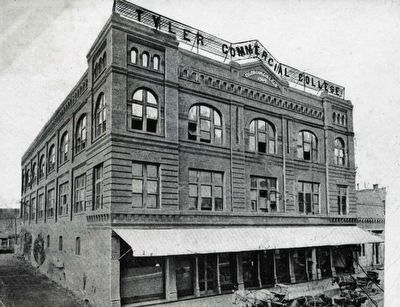