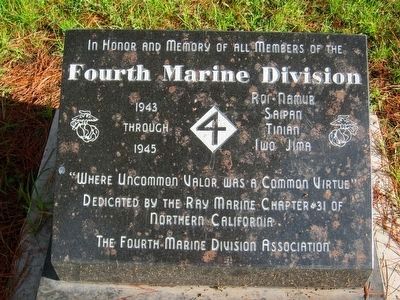 "Where Uncommon Valor Was a Common Virtue"

Dedicated by the Ray Marine Chapter #31 of
Northern California

Erected by The Ray Marine Chapter #31 of Northern California and the Fourth Marine Division Association.

Location. 38° 5.883′ N, 122° 16.249′ W. Marker is in Vallejo, California, in Solano County. Memorial is on Eighth Street west of Railroad Avenue, on the right when traveling west. Touch for map. Marker is in this post office area: Vallejo CA 94592, United States of America. Touch for directions. 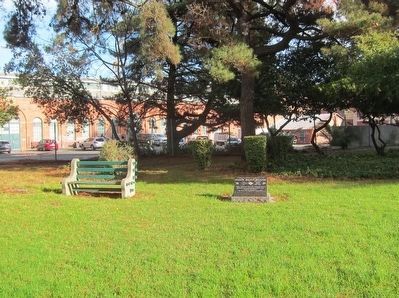 More about this memorial. The memorial is towards the back of the small park by Farragut Plaza on Mare Island.

Also see . . .  Division History. ...no division participated in more violent combat than did the Fourth. In 63 days it saw more action than did many units during months of jungle fighting, or in long campaigns in Italy and France. Every day was its own bloody battle, and every acre of Roi-Namur, Saipan, Tinian, and Iwo Jima was its own battlefield. The Fourth set something of a record in making four beachheads - - all of them bitterly opposed - - in less than 13 months. And if men escaped the discomfort of steaming jungles and the plagues of insects and disease, they were not so fortunate where enemy bullets were concerned. Sixty-three days of merciless but futile enemy opposition accounted for probably the highest casualty rate of any Marine division. During the four operations in which the Division was engaged, a total of 81,718 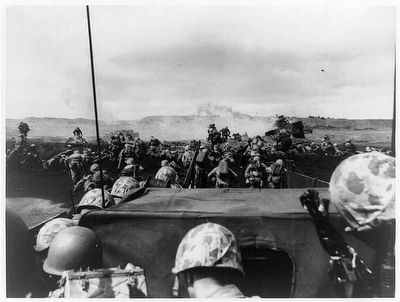 Photograph courtesy of the Library of Congress.
men saw action one or more times. (This is a combined figure of totals of all operations for the Reinforced Division, i.e., some served in all four operations, and thus are included four times.) Out of this total of 81,718, there were 17,722 casualties (some being wounded more than once) killed, wounded, and missing in action - - a total of 21.6 per cent. The percentage of the original 17,086 men who left the States with the Fourth and later became casualties would be even higher than this. These figures are not stated boastfully but as solemn facts that testify as no words possibly can to the contribution which the Fourth made to the victory in the Pacific. (Submitted on December 12, 2015.)
Credits. This page was last revised on June 16, 2016. It was originally submitted on December 12, 2015, by Andrew Ruppenstein of Sacramento, California. This page has been viewed 274 times since then and 17 times this year. Photos:   1, 2, 3. submitted on December 12, 2015, by Andrew Ruppenstein of Sacramento, California.
Share this page.