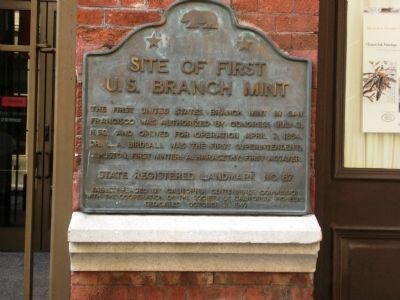 Tablet placed by California Centennial Commission with the Cooperation of the Society of California Pioneers. Dedicated October 21, 1949

Topics and series. This historical marker is listed in these topic lists: Government & Politics • Notable Buildings. In addition, it is included in the California Historical Landmarks series list. 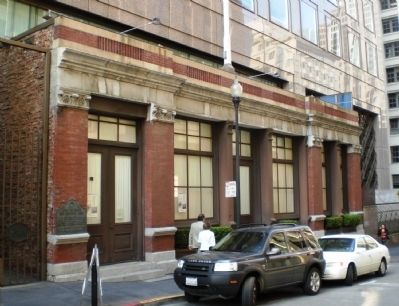 Regarding Site of First U.S. Branch Mint. The boom in economic activity in California caused by the Gold Rush created an unmet need for coinage. Congress recognized this in 1852 by passing legislation authorizing the Treasury Secretary to choose a site for the new branch mint. The new mint became operational in 1854, although production was hampered in the early years by a shortage of sufficient chemicals. Continued economic growth meant that the relatively small facility was soon inadequate, and in 1874 Congress appropriated $300,000 for the construction of a larger replacement facility. The building was razed in 1875, and a new four-story building for Treasury offices 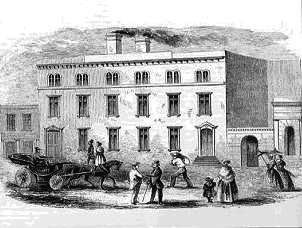 Artist unknown. Image is in the public domain.
3. Depiction of the first US branch mint in San Francisco
was erected on this site. The April 1906 earthquake and ensuing fire gutted the building, and subsequently it was reconstructed as a one-story building. Today the building houses the Pacific Heritage Museum.

This mint's successor, the "Granite Lady" located at Fifth and Mission, continued operation into the 1930's. That facility was subsequently replaced by a larger facility which is still in operation today.