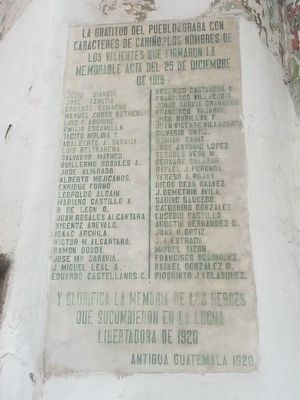 By J. Makali Bruton, November 27, 2015
1. Signers of the Act of December 25, 1919 Marker
Inscription.
English translation:
Is the gratefulness of the people written with kindness? These are the names of the brave men that signed the memorable Act of December 25, 1919, Names of the Act’s signers, Glory to the memory of the heroes that fell in the fight for liberty in 1920. . This historical marker was erected in 1920. It is in Antigua Guatemala in Municipality of Antigua Guatemala Sacatepéquez Guatemala