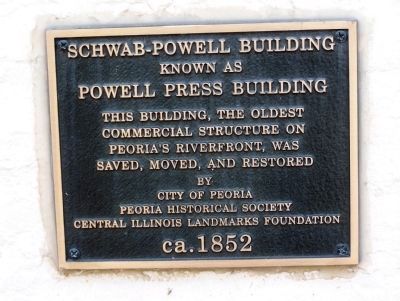 By Ginger Drenning, July 12, 2008
1. Schwab - Powell Building Marker
Two identical markers on front of building. One on each side of exterior door.
Inscription.
Schwab - Powell Building. ca. 1852. Known as Powell Press Building . . This building, the oldest Commercial structure on Peoria's Riferfront, was saved, moved, and restored by City of Peoria. . This historical marker was erected by City of Peoria, Peoria Historical Society and the Central Illinois Landmarks Foundation. It is in Peoria in Peoria County Illinois

This building, the oldest Commercial structure on Peoria's Riferfront, was saved, moved, and restored by City of Peoria.

Other nearby markers. At least 8 other markers are within 13 miles of this marker, measured as the crow flies. Peoria on The Riverfront / Peoria (here, next to this marker); Waterborn Services Memorial (about 500 feet away, measured in a direct line); Military Services Memorial Plaza (approx. 0.2 miles away); 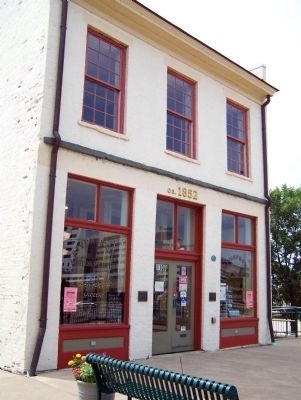