Honoring the Contributions of Chinese Immigrants 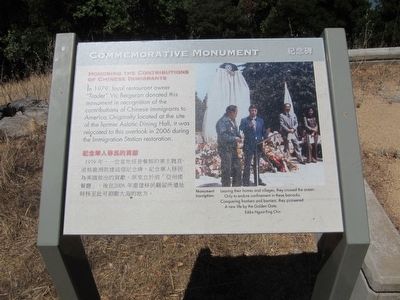 By Andrew Ruppenstein, July 24, 2013
1. Honoring the Contributions of Chinese Immigrants Marker
Inscription.
Honoring the Contributions of Chinese Immigrants. 紀念華人殺輯的露蹴. In 1979, local restaurant owner "Trader" Vic Bergeron donated this monument in recognition of the contributions of Chinese immigrants to America. Originally located at the site of the former Asiatic Dining Hall, it was relocated to this overlook in 2006 during the Immigration Station renovation. . . 1979年，一位當地經營餐館的業主魏克. 波格龍揭款建這個紀念碑，紀念華人移民 為美國做出的貢獻。原來立於前「亞州傻 餐廳」，後在2006年重建移民鶴留所遺址 時移至此可俯嫩大海的地方。 . This historical marker is in Tiburon in Marin County California

In 1979, local restaurant owner "Trader" Vic Bergeron donated this monument in recognition of the contributions of Chinese immigrants to America. Originally located at the site of the former Asiatic Dining Hall, it was relocated to this overlook in 2006 during the Immigration Station renovation.

Topics and series. This historical marker is listed in this topic list: Asian Americans. In addition, it is included in the Chinese Heritage Sites of the American West 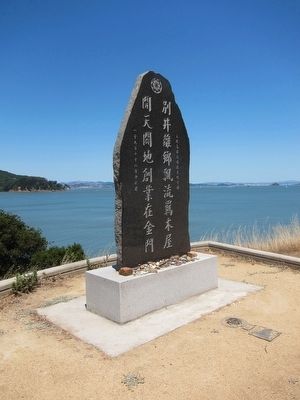 By Andrew Ruppenstein, July 24, 2013
2. Honoring the Contributions of Chinese Immigrants Monument
According to the caption on the marker, the monument reads as follows: Leaving their homes and villages, they crossed the ocean, only to endure confinement in these barracks. Conquering frontiers and barriers, they pioneered a new life by the Golden Gate. -- Eddie Ngoot Ping Chin
series list.

More about this marker. The marker is located on Angel Island, in Angel Island State Park, at China Cove, which is the location of the Immigration Station and Hospital. From Ayala Cove (Angel Island Ferry Terminal), take Northridge Trail to Perimeter Road and go north (it is signed) to the Immigration Station at China Cove. The easiest way to find the monument is to go to the Hospital Station, and rather than enter, head towards the water - it's very close to the north end of the Hospital. It's about a mile or more, and one should allow about half an hour. And there are some stairs on Northridge Trail. There is also a shuttle during part of the year - check the State Park website for Angel Island for details.

Also see . . .  Immigration Station - California State Parks Page. When it opened in 1910, the new detention facility on Angel Island was considered ideal because of its isolation. Access to and from the Island was very important to control and enforce the relatively new immigration laws and deal with the threat of disease from the many new people arriving daily to America. There were buildings to house and care for detainees, a pier, hospital, and regular boat service to the mainland. During the next 30 years, this was the point of entry for most of the approximately 175,000 Chinese 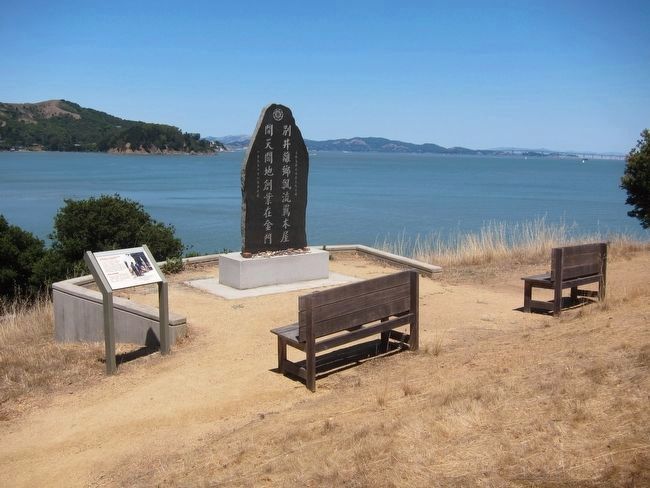 By Andrew Ruppenstein, July 24, 2013
3. Honoring the Contributions of Chinese Immigrants Marker and Monument - Wide View
Looking north, with Tiburon being the landmass on the left in the background, and the Richmond-San Rafael Bridge visible in the distant right background.
immigrants who came to the United States. Most of them were detained on Angel Island for as little as two weeks or as much as six months. A few however, were forced to remain on the island for as much as two years. (Submitted on December 25, 2015.)
Credits. This page was last revised on June 16, 2016. It was originally submitted on December 24, 2015, by Andrew Ruppenstein of Sacramento, California. This page has been viewed 379 times since then and 19 times this year. Photos:   1, 2, 3. submitted on December 24, 2015, by Andrew Ruppenstein of Sacramento, California.
Share This Page.