In Honor of All Veterans 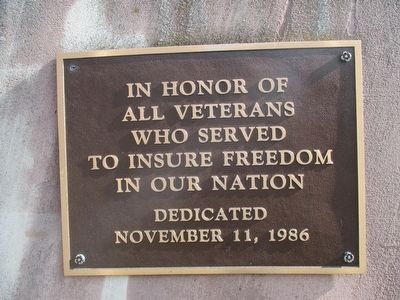 Photographed By Anton Schwarzmueller, February 7, 2016
1. Mounted Plaque
The plaque is on a slab of red Medina sandstone, a specialty building material from Orleans County.
Inscription.
In Honor of All Veterans. .
In honor of all veterans who served to insure freedom in our nation . . This memorial was erected in 1986. It is in Holley in Orleans County New York

Location. 43° 13.481′ N, 78° 1.485′ W. Marker is in Holley, New York, in Orleans County. Memorial is at the intersection of Public Square (New York State Route 31) and Frisbee Terrace, on the right when traveling north on Public Square. Touch for map. Marker is in this post office area: Holley NY 14470, United States of America. Touch for directions.

Other nearby markers. At least 8 other markers are within walking distance of this marker. 1823 Canal Bed (about 300 feet away, measured in a direct line); Holley Railway Depot (about 300 feet away); In Memory of All Those Servicemen (about 400 feet away); Safe House / Brainard Home (about 600 feet away); Eastern Orleans Memorial Post 202 (approx. ¼ mile away); First Norwegian Immigrants Landed in Holley, 1825 (approx. ¼ mile away); V.F.W. Post 202 Memorial (approx. 0.3 miles away); The Holley Loop (approx. 0.3 miles away). Touch for a list and map of all markers in Holley. 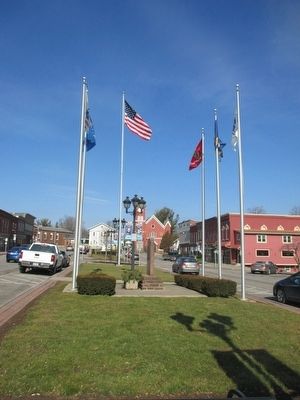 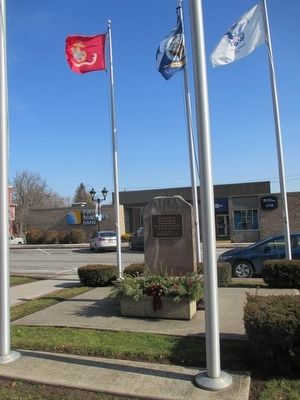