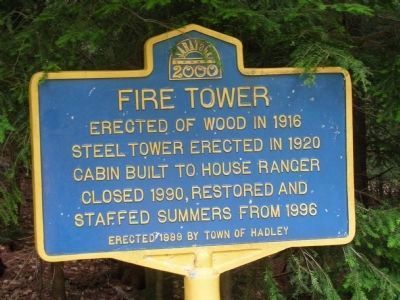 By Howard C. Ohlhous, June 30, 2008
1. Hadley Mountain Fire Tower Marker
In the Adirondacks of New York.
Inscription.
(Hadley Mountain) Fire Tower. .
Fire Tower Erected of wood in 1916 Steel tower erected in 1920 Cabin built to house ranger Closed 1990, restored and staffed summers from 1996. . This historical marker was erected in 1999 by the Town of Hadley. It is Near Hadley in Saratoga County New York

Location. 43° 22.327′ N, 73° 57.041′ W. Marker is near Hadley, New York, in Saratoga County. Marker is on Tower Road, on the right when traveling south. The Marker is at the beginning of the Trail, at the edge of the trailhead parking area. Touch for map. Marker is in this post office area: Hadley NY 12835, United States of America. Touch for directions. 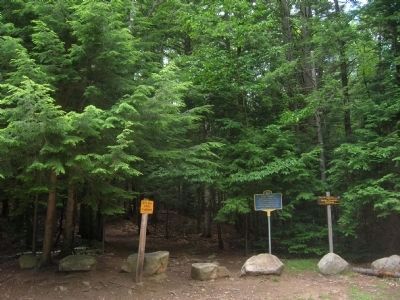 In the early 20th Century many fires raged through the forests of New York State. In 1903, 643 forest fires destroyed 464,000 acres of land in the Adirondacks and Catskills. Again in 1908, a dry year, there were 605 fires which ruined 368,000 acres of timber statewide with a cost of $178,992 to fight the fires in the Adirondacks. At that time fires were caused by sparks from steam locomotives, burning brush for agricultural purposes, hunters, fishermen, and campers’ campfires, smokers and arsonists. The terrible fires of 1908 created a public demand for fire protection resulting in the Forest Fish & Game Commission 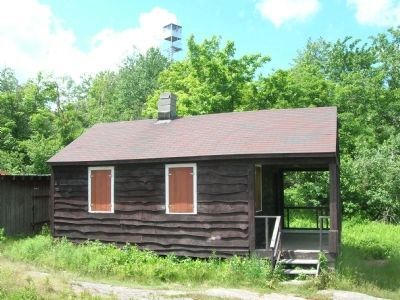 By Howard C. Ohlhous, June 30, 2008
3. Observer's / Summit Steward's Cabin
This is the steward's cabin built in 1950. The Fire tower can be seen in the background.
implementing a new state fire fighting system, which included mountain top observation points. By the end of 1910 there were 20 mountain top observation stations; 4 in the Catskills, 16 in the Adirondacks. These stations consisted of a log tower with an open observer platform, and a crude phone system.

In 1916 the state of New York purchased 10 steel towers to replace wooden structures. At that time the average cost of a fire tower was about $530, not including labor. The Hadley Mountain tower was installed in 1917. (Both the Marker, and Saratoga County website state 1920). In 1919 the state replaced the dangerous outside ladder on the fire towers with a system of stairs.

In 1917 the state built the observer cabin to replace older facilities at Hadley. During the winter of 1949-50 the Conservation Department had materials hauled on a sled by a team of horses to the summit to build a new observer cabin, the one in place today, which is of a standard design adopted by the state in 1922.

Records indicate that in 1921 Hadley Mountain reported 24 fires and had 155 visitors during the season which typically lasted from April first until the end of October.

In the 1970s the state reduced the number of operating fire towers from 102 statewide to 39. It had been determined that aircraft were more economical and the state saved a quarter of a million 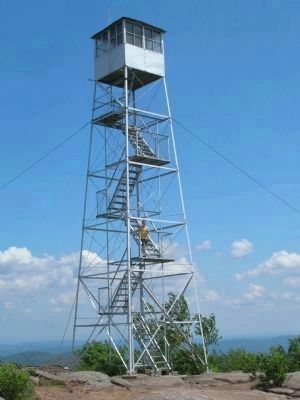 By Howard C. Ohlhous, June 30, 2008
4. Hadley Mountain Fire Tower
"Described by Coast and Geodetic Survey 1942 (KBJ) The station is located in Hadley Township, about 6.5 Miles W and 4 Miles N of the Hadley Post Office, on the summit of the W Mountain of the Hadley Mountain. It is a 4-legged steel structure that is 47.5 feet high with a glass enclosed cab. The apex of the roof was the point observed." - National Geodetic Survey Sheet. The guy wires help stabilize the tower as it can be dangerously windy at times.
dollars using 23 aerial detection flights.

In the early 1980s a study determined that only 4% of the forest fires reported state wide were reported by fire tower observers. The majority of fires were reported by local residents and passing motorists. 16 Adirondack fire towers were closed in the 1980s.

In 1990 the NYS Department of Environmental Conservation (DEC) closed the last four fire towers in the Adirondacks, including the tower at Hadley Mountain, which was closed on August 24th. In the early 90s the Hadley Fire Tower Committee was organized by local residents. They worked with the members of the Adirondack Mountain Club (ADK) and DEC personnel to restore the fire tower in the mid to late 90s. Each year since 1996 the committee hires a summit steward who lives in the observer’s cabin from July 4th through Labor Day, on duty Thursdays through Mondays. The steward greets summit visitors and tells them about the history of the tower and points out items of interest including other mountain peaks, and answers questions. Visitors are welcome to climb the stairs and visit the cab at the top of the fire tower which offers tremendous views of the Great Sacandaga Reservoir, the Mohawk Valley, the Catskills and the Heldeburg Escarpment. To the east are the Willsboro Mountain Range, Lake Champlain and the Green Mountains of Vermont, the Massachusetts Berkshires, 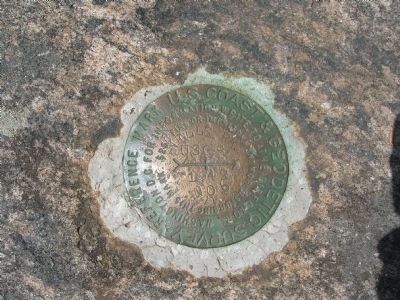 By Howard C. Ohlhous, June 30, 2008
5. Benchmark, Hadley Mountain
A 1942 U.S. Coast and Geodetic Survey Reference Mark, i.e. "Bench Mark" is afixed to the bare stone near the fire tower. Perminent ID (PID): OD1723 The arrow points toward Wells Peak.
and some of the Adirondack High Peaks can be seen to the north.

From the trailhead at the parking lot on Tower Road the hike to the fire tower and peak is about 2 miles on a well-defined, though rough and rocky trail which climbs about 1,500 feet to the summit were the elevation is 2,653 feet. Sweeping views of 300° from the open area of rocks at the summit are enjoyed during a well deserved rest. The estimated average time to hike the trail is about an hour and 20 minuets, one-way. Due to its location near the Lake George-Sacandaga area more than 10,000 hikers visit the summit year round. 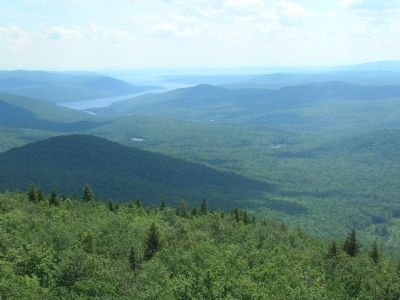 By Howard C. Ohlhous, June 30, 2008
6. View From Hadley Mountain Fire Tower
The view to the west reveals the upper arm of the Great Sacandaga Reservoir near the town of Day and hamlet of Conklingville. 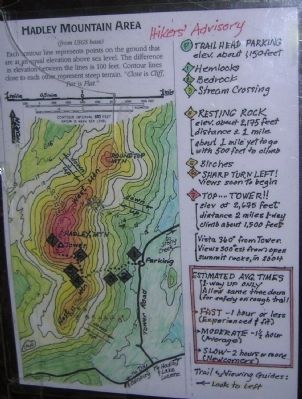