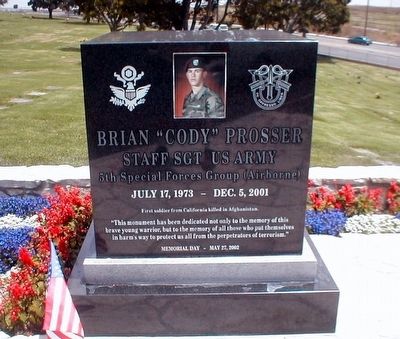 Photographed By Don Morfe, June 24, 2006
1. Brian "Cody" Prosser Monument Marker
Inscription.
Brian "Cody" Prosser. Staff Sgt. US Army.
July 17, 1973-Dec. 5, 2001 First Soldier from California Killed in Afghanistan. "This monument has been dedicated not only to the memory of this brave young warrior, but to the memory of all those who put themselves in harm's way to protect us all from the perpetrators of terrorism"
Memorial Day-May 27, 2002. . This memorial is in Rancho Palos Verdes in Los Angeles County California

July 17, 1973-Dec. 5, 2001
First Soldier from California Killed in Afghanistan
"This monument has been dedicated not only to the memory of this brave young warrior, but to the memory of all those who put themselves in harm's way to protect us all from the perpetrators of terrorism"
Memorial Day-May 27, 2002

Location. 33° 46.334′ N, 118° 18.581′ W. Marker is in Rancho Palos Verdes, California, in Los Angeles County. Memorial can be reached from South Western Avenue. This monument is located in Green Hills Memorial Park. Touch for map. Marker is at or near this postal address: 27501 South Western Avenue, Rancho Palos Verdes CA 90275, United States of America. Touch for directions. 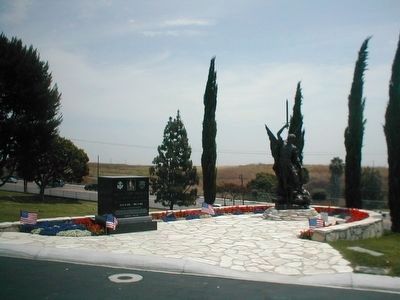 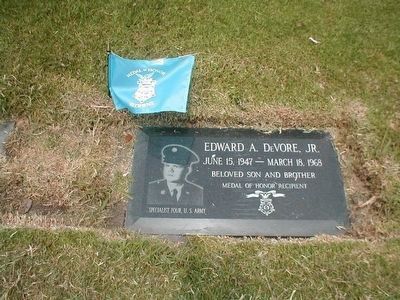 Photographed By Don Morfe
3. Edward A. Devore, Jr. Medal of Honor Recipient
Located near the monument:
He is buried in Green Hills Memorial Park, Ocean View Section, Lot 513H. He was killed in action. His Medal of Honor information and citation is: *DEVORE, EDWARD A., Jr. • Rank and Organization: Specialist Fourth Class, U.S. Army, Company B, 4th Battalion, 39th Infantry, 9th Infantry Division • Place and date: Near Saigon, Republic of Vietnam, 17 March 1968 Citation: For conspicuous gallantry and intrepidity in action at the risk of his life above and beyond the call of duty. Sp4c. DeVore, distinguished himself by exceptionally valorous actions on the afternoon of 17 March 1968, while serving as a machine gunner with Company B, on a reconnaissance-in-force mission approximately 5 kilometers south of Saigon. Sp4c. DeVore's platoon, the company's lead element, abruptly came under intense fire from automatic weapons, Claymore mines, rockets and grenades from well-concealed bunkers in a nipa palm swamp. One man was killed and 3 wounded about 20 meters from the bunker complex. Sp4c. DeVore raced through a hail of fire to provide a base of fire with his machine gun, enabling the point element to move the wounded back to friendly lines. After supporting artillery, gunships and air strikes had been employed on the enemy positions, a squad was sent forward to retrieve their fallen comrades. Intense enemy frontal and enfilading automatic weapons fire pinned down this element in the kill zone. With complete disregard for his personal safety, Sp4c. DeVore assaulted the enemy positions. Hit in the shoulder and knocked down about 35 meters short of his objectives, Sp4c. DeVore, ignoring his pain and the warnings of his fellow soldiers, jumped to his feet and continued his assault under intense hostile fire. Although mortally wounded during this advance, he continued to place highly accurate suppressive fire upon the entrenched insurgents. By drawing the enemy fire upon himself, Sp4c. DeVore enabled the trapped squad to rejoin the platoon in safety. Sp4c. DeVore's extraordinary heroism and devotion to duty in close combat were in keeping with the highest traditions of the military service and reflect great credit upon himself, the 39th Infantry, and the U.S. Army.
Credits. This page was last revised on June 16, 2016. It was originally submitted on February 15, 2016, by Don Morfe of Baltimore, Maryland. This page has been viewed 504 times since then and 26 times this year. Photos:   1, 2. submitted on February 15, 2016, by Don Morfe of Baltimore, Maryland.   3. submitted on February 16, 2016, by Don Morfe of Baltimore, Maryland. • Syd Whittle was the editor who published this page.
Share this page.