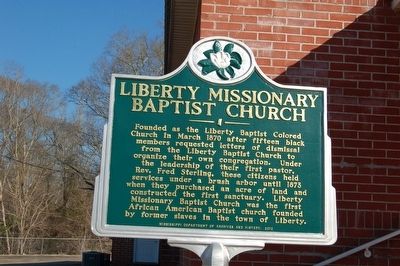 Founded as the Liberty Colored Church in March 1870 after fifteen black members requested letters of dismissal from Liberty Baptist Church to organize their own congregation. Under the leadership of their first pastor, Rev. Fred Stirling, these citizens held services under a brush arbor until 1873 when they purchased an acre of land and constructed the first sanctuary. Liberty Missionary Baptist Church was the first African American Baptist church founded by former slaves in the town of Liberty.

Topics and series. This historical marker is listed in these topic lists: African Americans • Churches & Religion. In addition, it is included in the Mississippi State Historical Marker Program series list.

Location. 31° 9.572′ N, 90° 48.832′ W. Marker is in Liberty, Mississippi, in Amite County. Marker is at the intersection of Walnut Drive and North Church Streeet, on the left when traveling north on Walnut Drive. Touch for map. Marker 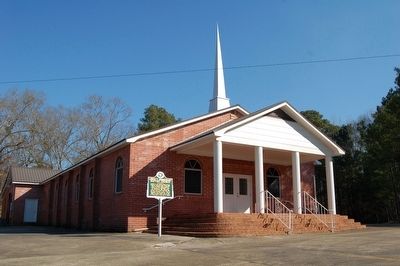 Click or scan to see
this page online
is at or near this postal address: 199 Walnut Street, Liberty MS 39645, United States of America. Touch for directions.