Railroad Company Sees Potential For A Town Among The Slash Pines

Ashland Museum Inside Out 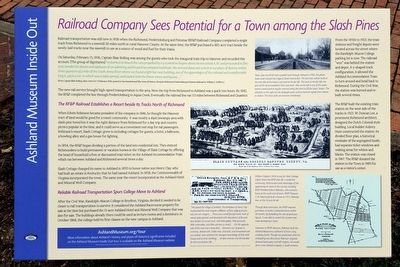 Railroad transportation was still new in 1836 when the Richmond, Fredericksburg and Potomac (RF&P) Railroad Company completed a single track from Richmond to a sawmill 20 miles north in rural Hanover County. At the same time, the RF&P purchased a 482-acre tract beside the newly-laid tracks near the sawmill to use as a source of wood and fuel for their trains.

On Saturday, February 13, 1836, Captain Blair Bolling was among the guests who took the inaugural train trip to Hanover and recorded this account. [The group of dignitaries] “embarked on board the cars propelled by a Locomotive Engine about eleven oclock A.M. and proceeded in fine style amidst the shouts and applause of an admiring and (in part) an amazed multitude. We arrived about one oclock at our place of destiny within three quarters of a mile of the South Anna River where we found a light but neat building, one of the appendages of the railroad and transferrable long it, upon a car, in which was a table spread, and loaded with the finest wines and liquors, …”
(From Captain Blair Bolling, diary entry for 13 February 1836, quoted in One Hundred 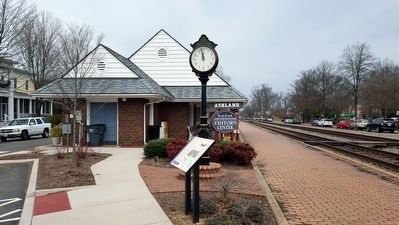 Click or scan to see
this page online
and Fifty Years of History: Along the Richmond, Fredericksburg & Potomac Railroad by William E. Griffin Jr.)

The new rail service brought high-speed transportation to the area. Now the trip from Richmond to Ashland was a quick two hours. By 1842 the RF&P completed the line through Fredericksburg to Aquia Creek. Eventually the railroad line ran 113 miles between Richmond and Quantico.

When Edwin Robinson became president of the company in 1846, he thought the Hanover tract of land would be good for a resort community. It was mostly a slash (swampy area with slash pine trees) but it was the right distance from Richmond for a day trip and country picnics popular at the time, and it could serve as a convenient rest stop for rail passengers. Robinson's resort, Slash Cottage, grew to including cottages for guests, a hotel, a ballroom, a bowling alley and a gas house for lighting.

In 1854, the RP&P began dividing a portion of the land into residential lots. They enticed Richmonders to build permanent or vacation homes in the Village of Slash Cottage by offering the head of household a free or discounted train ticket on the Ashland Accommodation Train which ran between Ashland and Richmond several times a day.

Slash Cottage changed its name to Ashland in 1855 to honor native son Henry Clay, who had built an estate in Kentucky that he had named Ashland. In 1858, the Commonwealth of Virginia incorporated the town. The same year the resort incorporated as the Ashland Hotel and Mineral Well Company.

After the Civil War, Randolph-Macon College in Boydton, Virginia, decided it needed to be closer to rail transportation to survive. It considered the Ashland Racecourse property for sale at the time but purchased the 13-acre Ashland Hotel and Mineral Well Company that was also for sale. The buildings already there could be used as lecture rooms and a dormitory. In October 1868, the college held its first classes on the new campus in Ashland.

From the 1850s to 1923, the train stations and freight depots were located across the street where the Randolph-Macon Coleg parking lot is now. The railroad “wye” was behind the station and depot. A y-shaped track configuration, it allowed the Ashland Accommodation Train to turn around and head back to Richmond. During the Civil War, the station was burned and rebuilt several times.

The RF&P built the existing train station on the west side of the tracks in 1923. W. Duncan Lee, a prominent Richmond architect, designed the Dutch Colonial style building. Local builder Aubrey Hunt constructed the station. Its divided floor plan, a historical reminder of the segregated South, had separate ticket windows and waiting areas for whites and blacks. The station was closed in 1967. The RFSP donated the station to the Town in 1985 for use as a visitor's center.

(captions)
Taken after the RF&P laid a parallel track through Ashland in 1903, this photo looks south toward the England Street intersection. The last train station built on the east side of the tracks is pictured at the far left. The track at the far left was part of the Accommodation Train wye track. Also on the left is one of the water towers constructed at regular intervals along the track to fill the trains' boilers. The tall poles on the right are the telegraph poles used to transmit signals from station to station. The short poles are kerosene streetlamps.

“We passed the village of Ashland, ‘the birthplace of Henry Clay,’… It presented the most singular collection of fairy lodging-houses any one can imagine. … There was a small fanciful hotel, built of wood, gaily painted, and decorated with abundance of Brussels lace borders of carved work, with little gables, little pinnacles, little colonnades, and little columns to match. … On the opposite side of the road was a long shed … Around a sort of green or common, dotted with ‘shade trees’ and seats, and everywhere else you looked, were scattered the strangest assemblage of little dolls’ houses and summer dwellings. … all open and airy and al intended for the out-of-doors life … .”
From Life in the South; From the Commencement of the War, by Catherine Cooper Hopley, Volume l, 1863, pp. 235-236.

William Clopton's 1854 survey for Slash Cottage (right) shows the RF&P plan for a residential community. Richmonders took advantage of the opportunity to move to the country including RF&P President Edwin Robinson, who owned a home at the south end of town. RF&P Treasurer C.W. Macmurdo built a home at 713 S. Railroad Ave. on the 10-acre lot #4.

Through deed restrictions, the RF&P required purchasers to build a substantial home within 18 months. By forbidding the sale of spirituous liquors, it was able to control the lucrative bar trade developing in town.

Unknown to RF&P directors, Robinson built the Ashland Racecourse southwest of town using company funds. Though not prosecuted when his embezzling was discovered, Robinson resigned, declared bankruptcy and left Virginia. He would form a new railroad company in South America.

Erected by The Ashland Museum.

Topics. This historical marker is listed in these topic lists: Industry & Commerce • Railroads & Streetcars. A significant historical date for this entry is February 13, 1836.

Location. 37° 45.564′ N, 77° 28.874′ W. Marker is in Ashland, Virginia, in Hanover County. Marker is on North Railroad Avenue south of Henry Clay Road, on the left when traveling south. Touch for map. Marker is at or near this postal address: 112 N Railroad Ave, Ashland VA 23005, United States of America. Touch for directions.