Ashland Museum Inside Out 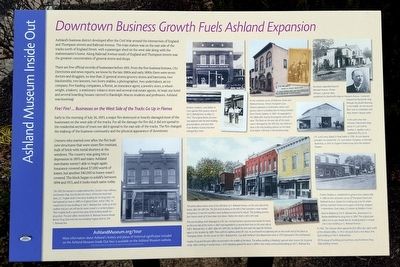 There are few official records of businesses before 1891. From the few business licenses, City Directories and news reports, we know by the late 1880s and early 1890s there were seven doctors and druggists, no less than 21 general stores/grocery stores and barrooms, two blacksmiths, two lawyers, two livery stables, a photographer, two undertakers, an ice company, five hauling companies, a florist, an insurance agent, a jewelry store, a wheel wright, a bakery, a stationary-tobacco store and several real estate agents. At least one hotel and several boarding houses catered to Randolph-Macon students and professors. Ashland was booming!

Fire! Fire! ... Businesses on the West Side of the Tracks Go Up in Flames 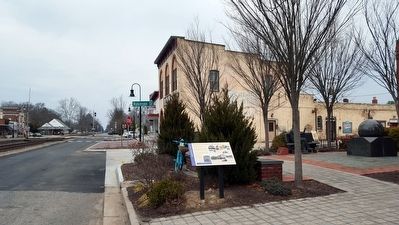 Click or scan to see
this page online
in the morning of July 26, 1893, a major fire destroyed or heavily damaged most of the businesses on the west side of the tracks. For all the damage the fire did, it did not spread to the residential section of town nor did it spread to the east side of the tracks. The fire changed the makeup of the business community and the physical appearance of downtown.

Owners who started over after the fire built new structures that were more fire resistant, built of brick with metal shutters at the windows. The country was going into a depression in 1893 and many Ashland merchants weren't able to begin again. Insurance covered about $7,000 worth of losses, but another $40,000 in losses wasn't covered. The block began to solidify between 1894 and 1913, and it looks much same today.

The 1893 fire started in a stable behind Mrs. Sinclair's new millinery and jewelry shop, but she did not return. Where her store had been, J.G. Hughes built a two-story building for his drug store. He had opened his store in 1889 on England Street, and in 1901, he moved into his new building at 106 S. Railroad Ave. Look up at the roofline and you can still see his name carved in a cement plague. Then Hughes built a second two-story brick building beside his drug store. The post office moved from N. Railroad Avenue beside Barnes Drug Store into the new building Hughes built at 104 S. Railroad Ave.

Brothers Herbert J. and Walter N. Cross opened their grocery store at 107 S. Railroad Ave. on May 12, 1912. The original frame structure was replaced with the brick building pictured above, and since then Cross Brothers Grocery has been enlarged four times.

At the northeast corner of Robinson Street and Railroad Avenue, French immigrant Louis Delarue operated a combination saloon and grocery store in a building that he had purchased from Charles Stebbins in 1869. He expanded in the 1880s after buying the property north of his store. This block on the east side of the tracks wasn't damaged by the 1893 fire, but Delarue's store is the only building (above) on the block built before 1900 that is still standing today.

The photo above shows most of the 100 block of S. Railroad Avenue, on the west side of the tracks, after the 1893 fire. The first brick building on the left is Nat Lancaster's meat market and grocery. It was the southern-most building burned and he rebuilt. This building and the four houses south of it have been torn down. Notice the street is still a dirt road.

The next building north belonged to D.B. Cox. He had started a general store beside his home on the east side of the tracks in 1867 and expanded to a second store here on the west side at 108 S. Railroad Ave. in 1869. After the 1893 fire, he rebuilt his store and was open for business again in this location by 1899. Then with his nephew, James M. Cox, he purchased two adjoining lots on the north end of the block at Thompson Street. On this corner at 100 S. Railroad Ave, Cox built Ashland's first department store in 1913 (pictured in the small photo).

Hughes Drug and the post office are pictured in the middle of the block. The yellow building is Meyberg's general store, known for its penny candy. After clerking in several stores, L.E.W Meyberg opened his store in 1894 in this newly-constructed building at 102 S. Railroad Ave.

Businesses expanded beyond Railroad Avenue. Clinton Winston, a former slave, established his blacksmith shop on Hanover Avenue. Customers entered the blacksmith shop through the double doorway in the middle. On the second floor was an undertaker and Alice Trotter's beauty salon.

In the same area near Winston's blacksmith shop, James N. Luck and his brother, S. Apollos Luck Jr., established The S.A.&J.N. Luck Livery, Board & Feed Stable in 1906. As cars became prevalent, he started the J.N. Luck Motor Company, a Chevrolet dealership, in 1916 on England Street across from the Ashland Theatre.

Charles Stebbins Jr. established his general store (above left) in 1883 on the northwest corner of Thompson Street and Railroad Avenue. Beside the building was a tie lot where farmers tied their horses and wagons while they shopped in downtown. Even today, it's known as Stebbins Corner.

Next to Stebbins at 102 N Railroad Ave., pharmacist C.A. Barnes established his drug store in 1899. The original post office can be seen beside Barnes' building before it moved into a new building on S Railroad Avenue.

In 1903, The Hanover Bank opened its first office (far right) north of the old post office. In 1913, the bank built a new Beaux Arts style building at 104 N. Railroad Ave.

Of the group of buildings pictured here, only the Barnes Drug Store building remains.

Erected by The Ashland Museum.