Topics and series. This historical marker is listed in this topic list: War of 1812. In addition, it is included in the William G. Pomeroy Foundation series list. A significant historical year for this entry is 1812.

Other nearby markers. At least 8 other markers are within walking distance of this marker. On This Day of May 30, 1991, The Semper Fidelis Post #356 (within shouting distance of this marker); To Honor the Memory of Our Dead (about 400 feet away, measured in a direct line); To Preserve the Memories (about 400 feet away); Forest Lawn Cemetery (about 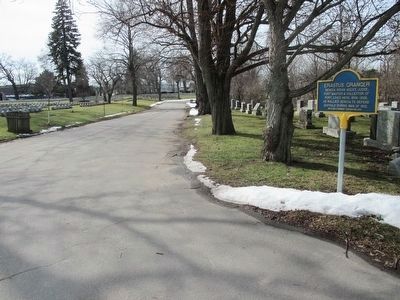 Photographed By Anton Schwarzmueller, February 28, 2016
2. Southward
Towards the Main Street entrance to the cemetery. Google street view is available within the cemetery.