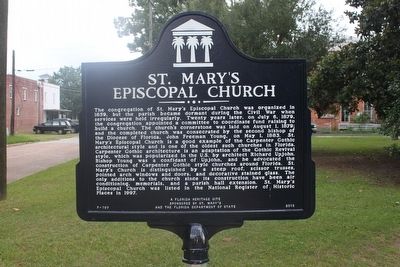 The congregation of St. Mary's Episcopal Church was organized in 1859, but the parish became dormant during the Civil War when services were held irregularly. Twenty years later, on July 6, 1879, the congregation appointed a committee to coordinate fund raising to build a church. The church's cornerstone was laid on August 1, 1879; and the completed church was consecrated by the second bishop of the Diocese of Florida, John Freeman Young, on May 1, 1883. St. Mary's Episcopal Church is a good example of the Carpenter Gothic architectural style and is one of the oldest churches in Florida. Carpenter Gothic architecture is an adaptation of the Gothic Revival style, which was popularized in the U.S. by architect Richard Upjohn. Bishop Young was a confidant of Upjohn, and he advocated the construction of Carpenter Gothic style churches around Florida. St. Mary's Church is distinguished by a steep roof, scissor trusses, pointed arch windows and doors, and decorative stained glass. The only additions to the church since its construction have been air conditioning, memorials, and a parish hall extension. St. Mary's Episcopal Church was listed in the 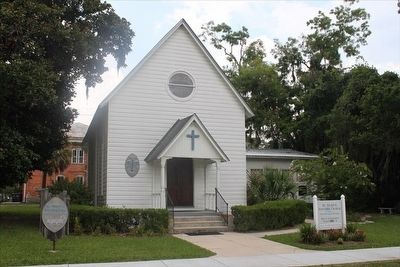 By Tim Fillmon, August 6, 2014
2. St. Mary's Episcopal Church
Marker is just out of the picture on the right.

Click or scan to see
this page online
National Register of Historic Places in 1997.

Topics. This historical marker is listed in this topic list: Churches & Religion. A significant historical date for this entry is May 1, 1883.