Two giant date palms flanked the entrance to this stately home, owned by Michael Kirsch and his family. Kirsch owned a blacksmith and wheelwright shop next door to this house, at the corner of Main Street and Lafayette Road (now Mt. Diablo Boulevard.

Topics and series. This historical marker is listed in this topic list: Notable Buildings. In addition, it is included in the California - Walnut Creek Heritage Walk series list. 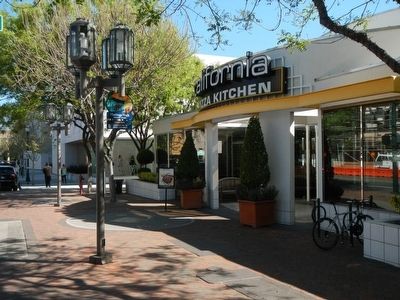 More about this marker. The site referred to by this marker was across the street. This marker is a part of the Walnut Creek Heritage Walk.

Regarding Kirsch Home. A Prussian immigrant, Michael Kirsch moved to Walnut Creek – then called “The Corners” -- in 1858. Before Walnut Creek, he ran a blacksmith shop in San Francisco.
On coming to Walnut Creek, Kirsch established a blacksmith and wheelwright shop that would operate for many years at the southeast corner of Main Street and Mt. Diablo Boulevard. His business offered a wide range of services -- from horseshoeing to making farm equipment. -- Walk Walnut Creek

Kirsch, his wife, Julia, and their four children lived in a stately white two-story home just south of his business on a site that today is an entrance to Broadway Plaza. 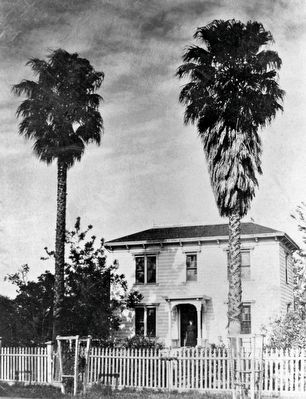