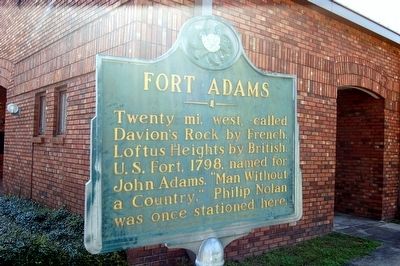 March 25, 2016
1. Fort Adams Marker
Inscription.
Fort Adams. . Twenty mi. west, called Davion's Rock by French. Loftus Heights by British. U.S. Fort, 1798, named for John Adams. "Man Without a Country," Phillip Nolan was once stationed here. . This historical marker was erected in 1978 by Mississippi Department of Archives and History. It is in Woodville in Wilkinson County Mississippi

Erected 1978 by Mississippi Department of Archives and History.

Topics and series. This historical marker is listed in this topic list: Forts and Castles. In addition, it is included in the Mississippi State Historical Marker Program series list. A significant historical year for this entry is 1798.

Location. 31° 6.24′ N, 91° 17.89′ W. Marker is in Woodville, Mississippi, in Wilkinson County. Marker is on Main Street (State Highway 24) west of Boston Row, on the right when traveling west. Touch for map. Marker is in this post office area: Woodville MS 39669, United States of America. Touch for directions. 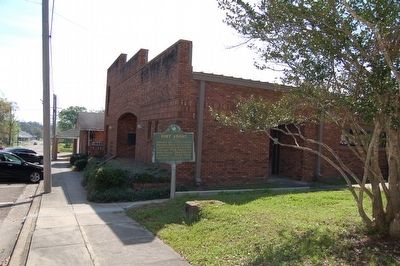 Additional commentary.
1. Major Amos Stoddard, Commanding Officer, Fort Adams, November 9, 1807 - June 18, 1808
According to entries in the Orderly Book of the Company of Captain Amos Stoddard, November 1807 - June 1808, Major Amos Stoddard (he was promoted to Major on June 30, 1807) was in command at Fort Adams (40 miles south of Natchez, Wilkerson County, Mississippi) from November 1807 until about June 18, 1808. Prior to that he had been in command at Newport Barracks, Kentucky from approximately January until November 1807. And prior to that, he served as the First Civil Commandant of Upper Louisiana at St. Louis from January 1804 until October 1, 1804. While serving as governor at St. Louis (after transferring the Louisiana territory from Spain to France and from France to the United States over March 9-10, 1804), he assisted the Lewis & Clark expedition and saw the Corp of Discovery off at St. Charles on May 21, 1804. In the fall of 1805, he led a deputation of Indian chiefs to Washington to meet with President Jefferson. Being ill at the time, he took leave for nine months of 1806 before recruiting a new artillery company and heading west to the Mississippi territory.

Another significant entry is made under the heading, “Orders, 16th November 1807:”

Captain Stoddard will parade Two Subalterns, Two Sergeants, Two Corporals, and all the Music of Fort Adams, with fifty privates of the first Regiment, to attend the funeral of Capt. [John] McClary, who made his exit, last night at nine Oclock; This Detachment will pay the Funeral Honors due the Deceased. The funeral will take place this day at such an hour as the Commanding Officer of Fort Adams may think proper to direct; Captain Stoddard will give the necessary directions with respect to the Effects of the deceased, agreeably to the ninety fourth article of the first Section of the rules and Articles of War. (Signed), Jacob Kingsbury, Lt. Col., 1st Regiment of Infantry, Commanding Camp Columbian Spring.

On or about September 28, 1808, Major Amos Stoddard departed Fort Dearborn and took an extended leave. Col. Thomas H. Cushing then took command at Fort Dearborn. Major Stoddard descended the Mississippi River to the Red River region and the Mississippi territory for the purpose of conducting research for his book, Sketches, Historical and Descriptive, of Louisiana, which was written while he was in command at Fort Columbus (Governor’s Island, New York) between December 1809 and early 1812. It was published in 1812.

Major Amos Stoddard died on May 11, 1813 from tetanus that developed from a shrapnel wound during the siege of Fort Meigs, Ohio during the War of 1812. He did not receive the same military honors due the deceased: his commanding officer, General William Henry Harrison, did not bother to make any special arrangements for his deceased, second-highest ranking officer as Stoddard did for Capt. McClary at Fort Adams. He left camp on the very day and prior to the funeral honors bestowed on Major Stoddard by Capt. Daniel Cushing’s Company of the 2nd U.S. Regiment of Artillerists.