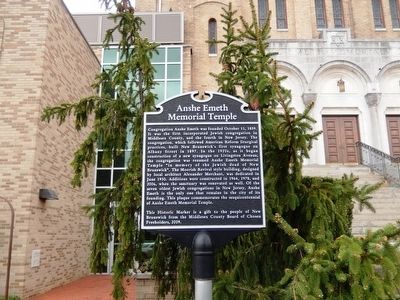 Congregation Anshe Emeth was founded October 11, 1859. It was the first incorporated Jewish congregation in Middlesex County, and the fourth in New Jersey. The congregation, which followed American Reform liturgical practices, built New Brunswick’s first synagogue on Albany Street in 1897. In the 1920s, as it began construction of a new synagogue on Livingston Avenue, the congregation was renamed Anshe Emeth Memorial Temple “in memory of the Jewish Dead of New Brunswick”. The Moorish Revival style building, designed by local architect Alexander Merchant, was dedicated Jun 1930. Additions were constructed in 1964, 1978, and 2006, when the sanctuary was renovated as well. Of the seven oldest Jewish congregations in New Jersey, Anshe Emeth is the only one that remains in the city of its founding. This plaque commemorates the sesquicentennial of Anshe Emeth Memorial Temple.

This Historic Marker is a gift to the people of New Brunswick from the Middlesex County Board of Chosen Freeholders, 2009.

Topics. This historical marker is listed in this topic list: Churches & Religion. A significant historical date for this entry is October 11, 1859. 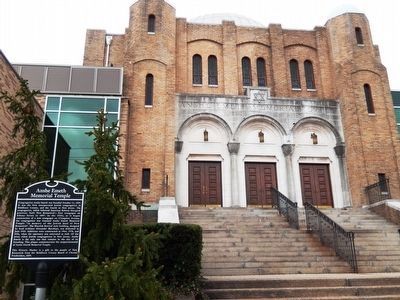 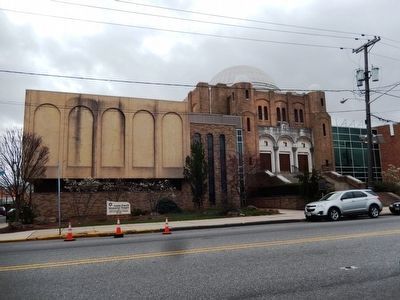