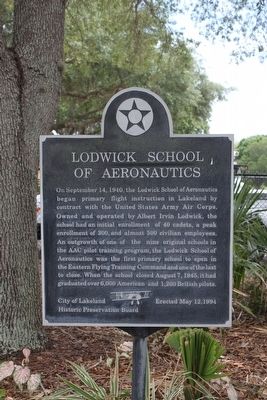 On September 14, 1940, the Lodwick School of Aeronautics began flight instruction in Lakeland by contract with the United States Army Air Corps. Owned and operated by Albert Irvin Lodwick, the school had an initial enrollment of 40 cadets, a peak enrollment of 300, and almost 500 civilian employees. An outgrowth of one of the nine original schools in the AAC pilot training program, the Lodwick School of Aeronautics was the first primary school to open in the Eastern Flying Training Command and one of the last to close. When the school closed August 7, 1945, it had graduated over 6,000 American and 1,200 British pilots.

Erected 1994 by Lakeland Historic Preservation Board.

Topics. This historical marker is listed in these topic lists: Air & Space • War, World II. A significant historical date for this entry is September 14, 1940.

Location. 28° 4.407′ N, 81° 56.965′ W. Marker is in Lakeland, Florida, in Polk County. Marker can be reached from North Lake Avenue, 0.1 miles north of Gilmore Avenue, on the left when traveling north. Marker is located on the west side of the Tigertown 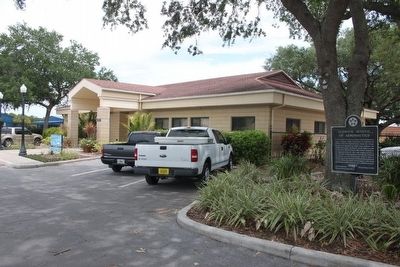 Click or scan to see
this page online
Complex Parks Office. Touch for map. Marker is at or near this postal address: 2220 North Lake Avenue, Lakeland FL 33805, United States of America. Touch for directions. 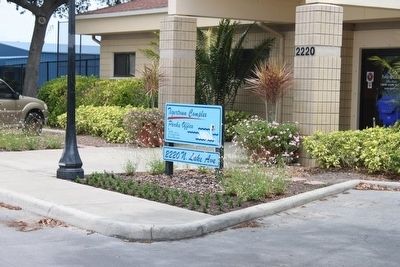