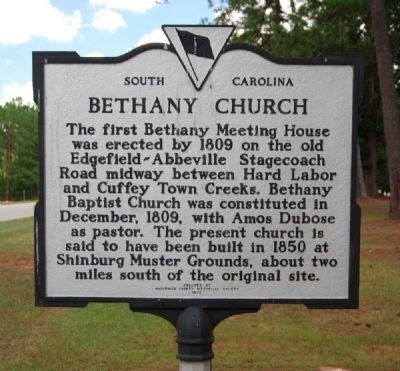 By Brian Scott, July 19, 2008
1. Bethany Church Marker
Inscription.
Bethany Church. . . The first Bethany Meeting House was erected by 1809 on the old Edgefield-Abbeville Stagecoach Road midway between Hard Labor and Cuffey Town Creeks. Bethany Baptist Church was constituted in December 1809, with Amos Dubose as pastor. The present church is said to have been built in 1850 at the Shinburg Muster Grounds, about two miles south of the original site. . This historical marker was erected in 1970 by McCormick County Historical Society. It is Near McCormick in McCormick County South Carolina

The first Bethany Meeting House was erected by 1809 on the old Edgefield-Abbeville Stagecoach Road midway between Hard Labor and Cuffey Town Creeks. Bethany Baptist Church was constituted in December 1809, with Amos Dubose as pastor. The present church is said to have been built in 1850 at the Shinburg Muster Grounds, about two miles south of the original site.

Topics and series. This historical marker is listed in these topic lists: Churches & Religion • Settlements & Settlers. In addition, it is included in the South Carolina, McCormick County Historical Society series list. 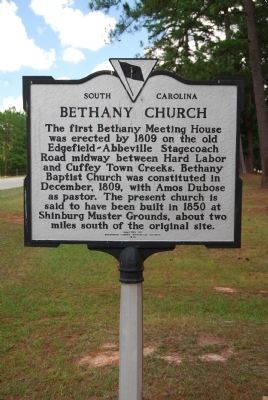 Also see . . .  Bethany Baptist Church Cemetery Listing. An index of those buried in the church cemetery using a transcript dated 1987. (Submitted on July 22, 2008, by Brian Scott of Anderson, South Carolina.) 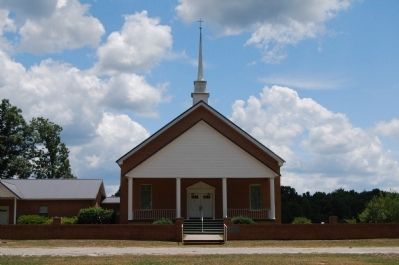 By Brian Scott, July 19, 2008
3. Bethany Church - Main Sanctuary
till the end of the year 1824. Larkin Cason was first clerk, serving until 1829. John Longmire was made deacon in 1816—the first recorded. There was a great revival in 1810. This revival was followed by a state of lukewarmness, as it appears from the records that only seven persons were baptized into the church from the close of 1810 to the first of 1829. The church then took on new life and had great revivals for several years. Many were added to the church by baptism, some of whom were negroes. For three years there were revivals each year, and they have continued at intervals to the present time.

This church united with the Edgefield Baptist Association in 1810. Rev. R.M. Todd was pastor from some time in 1825 to the end of 1831, with the exception of an interval from January to August, 1828, during which time a Rev. Mr. Roberts was pastor. The church licensed Henry Casper and Washington Belcher to preach in 1810, and ordained Henry Casper in 1811. 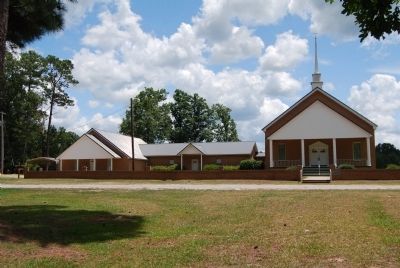 Rev. William Royal became pastor in 1845, and served until the close of the year 1848. During the year 1849 Rev. A.P. Norris was pastor the first Sunday and the day before in each month; Rev. James Shadrack fourth Sunday in each month.

In 1850 there was a new house of worship built at Shinburg muster ground, near Longmire's post office. The old meeting house, which was on the road from Edgefield Court House to Abbeville Court House, and about midway between Hard Labor and Cuffeetown Creeks, was sold and the church moved into the new house of worship. Rev. John Trapp was made pastor in 1850, and Rev. James Shadrack was ordained to the Gospel ministry the same year, and during the same year Joseph L. Talbert was made clerk.

Rev. John Trapp served as pastor to the close of 1874. Under his administration the church prospered—he was greatly beloved and was finally compelled to resign on account of age and infirmities incident thereto. Hezekiah Edwards and Peter Quattlebaum were made deacons in 1854. John G. Thornton was made deacon in 1863, and in the same year R.W. Seymour was ordained to preach, and called to preach one Sunday in each month, as an assistant to Rev. John 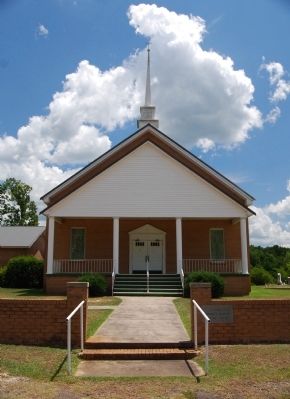 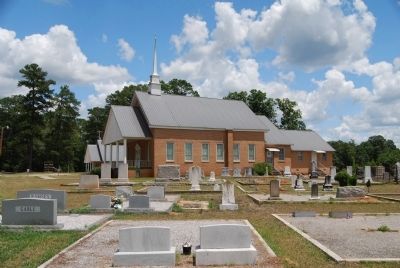 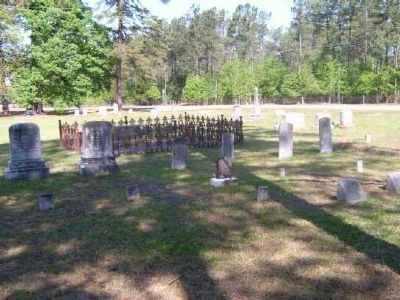 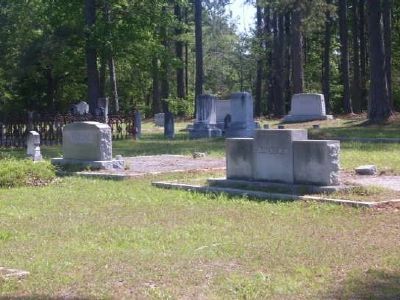 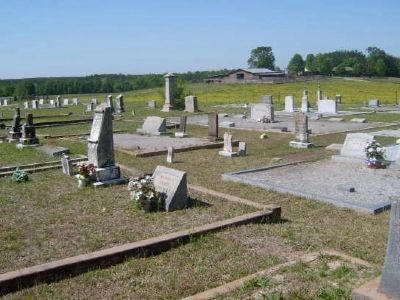