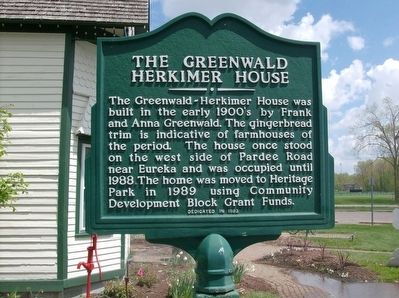 The Greenwald-Herkimer House was built in the early 1900's by Frank and Ann Greenwald. The gingerbread trim is indicative of farmhouses of the period. The house once stood on the west side of Pardee Road near Eureka and was occupied until 1988. The home was moved to Heritage Park in 1989 using Community Development Block Grant Funds.

Topics. This historical marker is listed in this topic list: Notable Buildings. A significant historical year for this entry is 1988.

Location. 42° 12.93′ N, 83° 15.081′ W. Marker is in Taylor, Michigan, in Wayne County. Marker can be reached from Pardee Road 0.3 miles north of Northline Road. The Greenwald Herkimer House is located with the historical buildings at the southwest corner of Heritage Park. It is being used as a candy shop. Touch for map. Marker is at or near this postal address: 12111 Pardee Road, Taylor MI 48180, United States of America. Touch for directions. 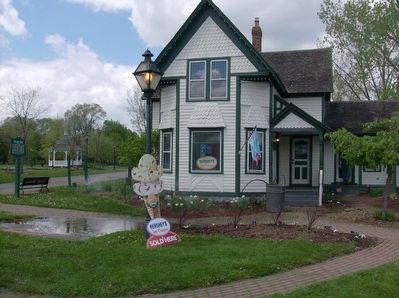