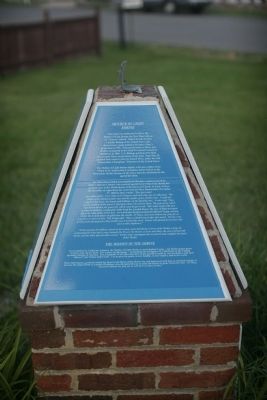 Maryland was dedicated to Mary, the Mother of God, during the first Mass held on St. Clement's Island. John Carroll, the first Catholic Bishop of the United States declared our young nation to be under Mary's protection in 1792. National devotion to Mary was further recognized at the Sixth Provincial Council of Baltimore in 1846. U. S. Bishops petitioned the Holy See to name Mary as the patroness of our land. Pope Pius IX granted their request when he named Mary, under her title "Immaculate Conception," Patroness of the United States.

The Mother of Light Shrine depicts a life-size replica of the Medal of the Immaculate Conception, better known as the Miraculous Medal, because of the many miracles attributed to this special devotion.

The Miraculous Medal was manifested through a vision received by Saint Catherine Laboure who received special favors from God during her novitiate days at the Motherhouse of the Sisters of Charity in Paris, France. She describes an Apparition she received from Mary Immaculate (November 27, 1830) in these words: "Her feet rested as a white globe. I saw rings on her fingers and 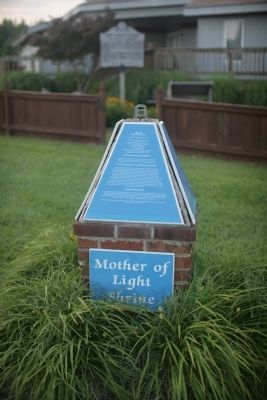 By Tom Fuchs, July 1, 2008
2. Mother of Light Shrine Marker (South Face)
each ring was set with gems. The larger gems emitted greater rays and the smaller gems smaller rays. I could not express what I saw, the beauty and brilliance of the dazzling rays. A voice said, 'they are the symbols of the graces I shed upon those who ask for them. The gems from which rays do not fall are the graces for which souls forget to ask.' Her arms swept wide in a gesture of motherly compassion while from her jeweled fingers the rays of light streamed upon the white globe of her feet. An oval frame formed around the Blessed Virgin, written within the oval in letters of gold were the words: O Mary, conceived without sin, pray for us who have recourse to thee." The Virgin said: "Have a medal struck after this model. All who wear it shall receive great graces; they should wear it around their neck. Graces will abound for persons who wear it with confidence."

"At this instant the table seemed to turn, and I beheld the reverse of the medal: a large M surmounted by a bar and a cross: beneath the M were the hearts of Jesus and Mary, the one crowned with thorns, and the other pierced with a sword." Twelve stars ecompass the two hearts and complete the back of the Medal.

THE MISSION OF THE SHRINE

As revealed to St. Catherine Laboure, the Mother of Light Shrine is an invitation to pray - for all the graces given to those who ask for 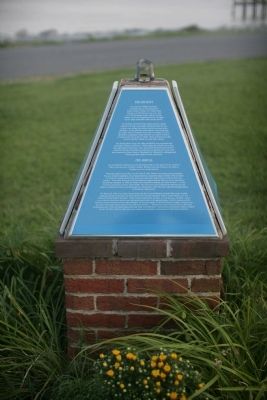 By Tom Fuchs, July 1, 2008
3. Mother of Light Shrine Marker (North Face)
them. It is a place of pilgramage - overlooking the birthplace of Catholicism in the English speaking colonies of America. It is a reminder to all who come here of the sacrifices made by our forefathers and their vision of "one Nation under God." Let us pray for peace, in our families, in our country, and in the world.

Mary, full of grace, perfectly united her heart to the Heart of her divine Son and journeyed with him, in soul and in body, to heaven. She shines forth as a model of holiness to us all and invites us to unite our hearts with Jesus Christ her Son. "O Mary, conceived without sin, pray for us who have recourse to thee."

Jesus said, "You shall love the Lord Your God with your whole heart, your whole soul and with all of your mind." This is the first and great commandment. The second is that you shall love your 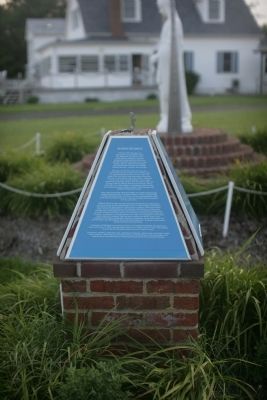 THE FATIMA MESSAGE - A MESSAGE FOR TODAY

In Fatima, Portugal, (1917) Our Lady appeared to three shepherd children. She said: "Pray the rosary every day to bring peace to the world and end the war." She also promised to assist souls at the hour of death with the graces necessary for salvation, who on the first Saturday of five consecutive months, would go to Confession and receive Holy Communion, recite five decades of the rosary and keep her company for a quarter of an hour while meditating on the mysteries of the rosarie with the intention of making reparation to her Immaculate Heart. "Our Lord wishes that devotions to my Immaculate Heart be established in the world. If what I tell you is done, many souls will be saved and there will be peace...I ask the consecration of the world to my Immaculate Heart and Communion of reparation on the First Saturday of each month. In the end, my Immaculate Heart will triumph and an era of peace will be conceded to humanity." It is important to note, this is not Our Lady's request, it is "Our Lord" Jesus Christ who wishes to establish devotion to His mother. "A great sign appeared in the sky, a woman clothed in the sun, with the moon under her feet, and on her head a crown of twelve stars." Rev. 12:1

Let us implore God's mercy on our sinful country. 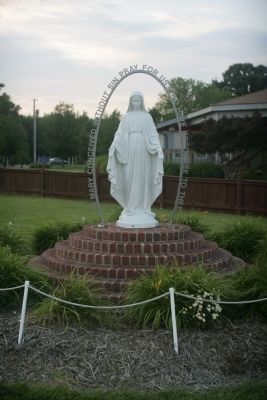 By Tom Fuchs, July 1, 2008
5. Statue of Saint Mary
O Merciful God, we cry to thee for pardon and mercy. We are "an unbelieving and perverse generation. We are disobedient, disloyal and ungrateful to Thee. We have excluded Thee from our homes, our schools, our business places. We are no longer worthy to be called Thy children. But, Merciful God, Spare America! Forgive us! Save us from the scourge which we have deserved. Teach us thy Law, and move our wills to serve Thee, henceforth, Merciful God, please save America!

Finally, unworthy though we are - but trusting in God's mercy, let us ask his blessing and peace on our president, our nation and on the whole world.

In October 1995, while plans were being made to erect this Shrine, the late Rev. Don Rinfret, S. J., Director of the Jesuits Mission in Baltimore, Maryland blessed this land and prayed for God's grace upon the United States and all who would someday visit here. In his consecrated hands, Father Rinfret held a first class relic of Mother Elizabeth Ann Seton - America's first born saint.

With the approval of his pastor, Rev. Bert Akers, S. J., Assoicate Pastor, St. Mary's Star of the Sea Parish, Ocean City, Maryland donated the shrine statue as a gift. This statue of Our Lady with her arms outstretched, as seen in St. Catherine's vision, is known as Our Lady of Grace. At the time it was given, the 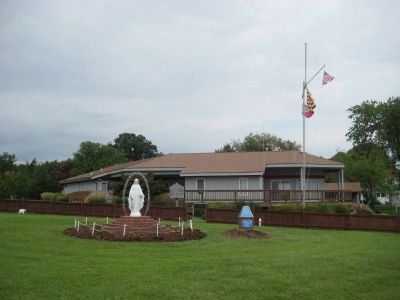 By F. Robby, August 31, 2009
6. Statue and Marker
Behind the statue and marker is the St. Clement Island - Potomac River Museum.
statue was badly damaged. It was lovingly repaired and transported to Colton's Point on October 4, 1996. The next day, October 5, 1996, the Most Reverend Leonard J. Oliver, S. V. D., D. D., V. G. of the Archdiocese of Washington, celebrated Mass here and blessed the statue "Mother of Light" with the intention of naming the Shrine under this title.

Many aspects of the Shrine and its surroundings are symbolic and hold special meaning including this pillar. It belonged to former St. Mary's Academy (1885), a Catholic high school for girls. It was one of many parochial schools taught by the Sisters of Charity of Nazareth. It represents the pillar of faith witnessed to us by the early settlers.

Within the shrine are many bricks and rocks that have been collected from many historical sites in Maryland including St. Mary's Academy Chapel, Leonardtown; Sacred Heart Parish, Bushwood; Holy Angels Convent, Avenue; St. Francis Xavier Manor House, Newtowne and Emmitsburg. Soil and pebbles collected from several holy places throughout the world including the Holy Land and Fatima were added in the foundation. Seven tiers of bricks form the base. Each tier was made into a circle representing the Alpha and the Omega - no beginning, no end. The foundation was completed on September 27, 1997 and the statue of Our Lady was placed. Within the hour of emplacement, the Rev. Paul F. Liston, 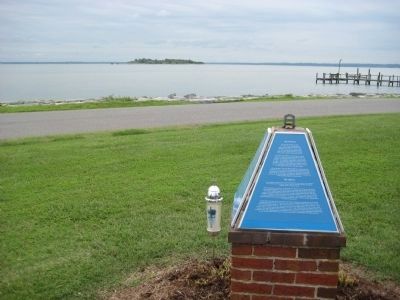 By F. Robby, August 31, 2009
7. Marker and St. Clement's Island
The first Catholic mass in the English colonies was held on St. Clement's Island, seen here in the background. Although the state shares a namesake with the Virgin Mary, Maryland was named for Queen Henrietta Maria, wife of King Charles I of England.
Archdiocese of Washington, coincidentally visited here on pilrimage, also blessed the Shrine and prayed for deliverance and healing for all those who would sojourn here. He further invoked as special blessing from God for the United States.

In September of 1998, almost one year later, the archway was completed and installed. Encompassing the statue are the words: "O Mary, Conceived without sin, pray for us who have recourse to thee." This completed the front side of the Miraculous Medal as seen in St. Catherine's vision.

His Eminence, Theodore Cardinal McCarrick, Archbishop of Washington, celebrated Mass at the Mother of Light Shrine on October 7, 2001. Respect for Life Sunday and Feast of the Holy Rosary. He blessed the Shrine, now completed, and re-consecrated America to God through the intercession of Mary from this holy place.

In search for religious freedom, Leonard Calvert, accompanied by Father Andrew White, S. J.; Father John Altham, S. J.; Brother Gervase, S. J. and over 150 European settlers sailed from the harbor of Cowes, England in the Isle of Wight on two ships named the ARK and the DOVE.

St. Clement, the fourth Pope, died a martyr's death when he was tied to an anchor and thrown into the sea. As they were sailing, the settlers had to overcomemany obstacles. At one point, the wind failed, so they anchored for a time. On St. Clement's Feast Day, November 23, 1633, the DOVE, a pinnance, while anchored was almost struck by a French Cutter due to heavy winds. Those on board saved the vessel by quickly cutting away the ship's anchor.

Also during their voyage, the ARK and DOVE were separated and amazingly reunited weeks later! They prayed for the intercession of Mary, under her title the Immaculate Conception; St. Ignatius of Loyola (who later became Patron Saint of Maryland); St. Michael the Archangel and all the guardian angels for their protection.

As you stand here and look out over the Potomac River, once known as St. Gregory's River, you can see St. Clement's Island. Directly across the Potomac, the State of Virginia serves as a scenic horizon.

When the settlers arrived here in early March, 1634, Indians were living on the mainland. Not sure of their friendliness, they disembarked on a beautiful adjacent island. They named St. Clement's Island to honor the great saint whom they believed interceded for their safe journey. At the time of their arrival, the Island was approximately 400 acres in size and almost touched the mainland. In 1998, the Island was estimated to embody just under 40 acres. "No time was lost in missionary work for Father White. he rowed over to the mainland the following day and began his dedicated work of converting the Indians to Christianity." (Ref. the book, This Was Potomac River by Frederick Tilp, pg 153)

On March 25, 1634 Feast of the Annunciation, the first recorded Roman Catholic Mass in the English Speaking colonies of America was celebrated on St. Clement's Island by Father Andrew White, S. J. It is written in Father White's memoirs: "Wfter we had completed the sacrifice, we took upon our shoulders a great cross, which we had hewn out of a tree, and advancing in order to the appointed place, with the assistance of the Governor and his associates and other Catholics, we created a trophy to Christ the Saviour, humbly reciting on our bent knees the Litanies of the Sacred Cross, with great emotion..." The first Governor Leonard Calvert, then took possession of the Maryland colony and read aloud Lord Baltimore's instructions proclaiming religious freedom for all. In 1934, a 40 foot white cross was erected on the Island to commemorated all that transpired.