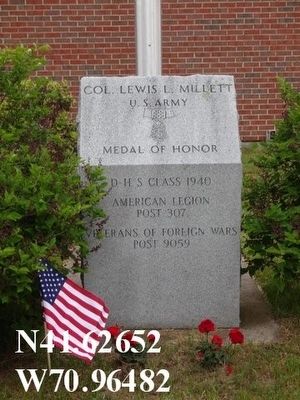 Location. 41° 37.591′ N, 70° 57.889′ W. Marker is in Dartmouth, Massachusetts, in Bristol County. Memorial is on Slocum Road. The marker is located on the lawn of Dartmouth Middle School. Col. Millett is buried in Riverside National Cemetery,(Section 2-Site 1910) Riverside CA. Touch for map. Marker is at or near this postal address: 366 Slocum Road, North Dartmouth MA 02747, United States of America. Touch for directions.

Other nearby markers. At least 8 other markers are within 2 miles of this marker, measured as the crow flies. Pvt. David Lewis Gifford Memorial (a few steps from this marker); Dedicated as a Tribute (approx. 0.9 miles away); Nathan and Mary (Polly) Johnson House (approx. 1.9 miles away); Frederick Douglass (approx. 2 miles away); Captain Paul Cuffe's Atlantic World

Regarding Col. Lewis L. Millett Memorial. His Medal of Honor information and citation: MILLETT, LEWIS L.
• Rank and organization: Captain, U.S. Army, Company E, 27th Infantry Regiment.
• Place and date: Vicinity of Soam-Ni, Korea, 7 February 1951.
• Entered service at: Mechanic Falls, Maine.
• G.O. No.: 69, 2 August 1951.
Citation: Capt. Millett, Company E, distinguished himself by conspicuous gallantry and intrepidity above and beyond the call of duty in action. While personally leading his company in an attack against a strongly held position he noted that the 1st Platoon was pinned down by small-arms, automatic, and antitank fire. Capt. Millett ordered the 3d Platoon forward, placed himself at the head of the 2 platoons, and, with fixed bayonet, led the assault up the fire-swept hill. In the fierce charge Capt. Millett bayoneted 2 enemy soldiers and boldly continued on, throwing grenades, clubbing and bayoneting the enemy, while urging his men forward by shouting encouragement. Despite vicious opposing fire, the whirlwind hand-to-hand assault carried to the crest of the hill. His dauntless leadership and personal courage so inspired his men that they stormed into the hostile position and used their bayonets with such lethal effect that the enemy fled in wild disorder. During this fierce onslaught Capt. Millett was wounded by grenade fragments but refused evacuation until the objective was taken and firmly secured. The superb leadership, conspicuous courage, and consummate devotion to duty demonstrated by Capt. Millett were directly responsible for the successful accomplishment of a hazardous mission and reflect the highest credit on himself and the heroic traditions of the military service.
Credits. This page was last revised on June 16, 2016. It was originally submitted on June 2, 2016, by Don Morfe of Baltimore, Maryland. This page has been viewed 222 times since then and 13 times this year. Photo   1. submitted on June 3, 2016, by Don Morfe of Baltimore, Maryland. • Bill Pfingsten was the editor who published this page.
Share this page.