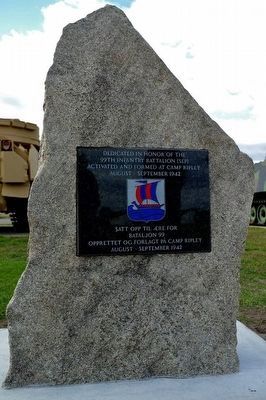 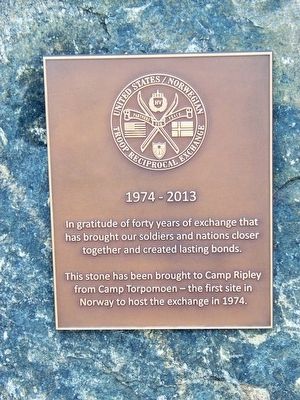 Photographed By Erik Brun, 2014
2. United States Norwegian Troop Reciprocal Exchange
This nearby tablet memorializes the long relationship between the Norwegian Ministry of Defense and the Minnesota National Guard exemplifies the tradition of the 99th.

Regarding 99th Infantry Battalion (Sep) activated at Camp Ripley August 1942. In the two years following the German invasion of neutral Norway, in April 1940, Norwegians and Norwegian-Americans in the United States struggled to find ways to come to the aid of their homeland. Here begins the tale of over thousand men whose fate became tied to the War Department’s secret plans.
The 99th Infantry Battalion (Separate) was activated in August 1942, Here at Minnesota’s Camp Ripley. The unit quickly grew and moved to Fort Snelling near Minneapolis. By mid-December the unit received orders to move to the newly completed Camp Hale, Colorado. The Battalion was identified as a “separate” unit since it did not belong to a regiment. Composed of Norwegian citizens and Norwegian Americans, the unit engaged in grueling winter and mountain warfare training at elevations above 10,000 feet. By August 1943 the unit was combat ready and moved to Europe.
Landing two weeks after D-Day, they fought across Northern Europe to the German border with the second armored division. With the 30th Infantry Division they helped encircle the historic German capital of Aachen and held the 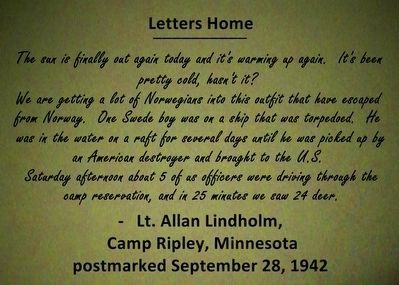 Photographed By Erik Brun
3. Detail from 99th Battalion Foundation Educational Poster about Camp Ripley
A letter home from Lt. Allen Lindholm about life at Camp Ripley in September, 1942. Lindholm was killed in action with the battalion in France, in 1944.
line during the bitter winter fighting around Malmedy during the Battle of the Bulge.
In January 1945, the Battalion joined the veterans of the First Special Service Force, Darby’s Rangers and the 552nd Anti-Tank Company in the new 474th Infantry Regiment. In April the Regiment joined Patton’s third Army for the final drive to Germany. Within hours of Germany’s surrender, the 99th began its last secret mission when the Regiment started preparations for their movement to Norway.

Also see . . .  99th Infantry Battalion (Separate) Foundation. The educational foundation established to preserve the memory and sacrifices of these brave men. (Submitted on June 4, 2016, by Erik Brun of Chester, Virginia.)