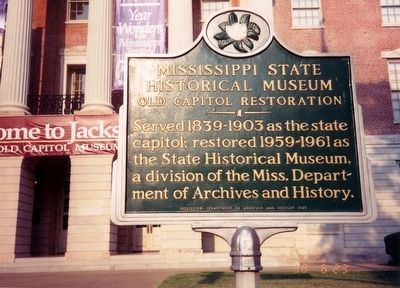 Served 1839-1903 as the state capitol: restored 1959-1961 as the State Historical Museum, a division of the Miss. Department of Archives and History.

Erected 1977 by Mississippi Department of Archives and History.

Topics and series. This historical marker is listed in this topic list: Notable Buildings. In addition, it is included in the Mississippi State Historical Marker Program series list.

Location. This marker has been replaced by another marker nearby. It was located near 32° 17.95′ N, 90° 10.813′ W. Marker was in Jackson, Mississippi, in Hinds County. Marker was at the intersection of South State Street (U.S. 51) and East Capitol Street, on the right when traveling north on South State Street. Touch for map. Marker was at or near this postal address: 100 S State St, Jackson MS 39201, United States of America. Touch for directions. 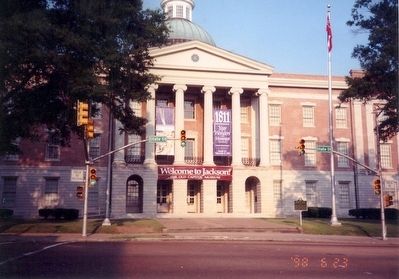 Additional commentary.
1. Marker replaced.
As the state capitol (1839 - 1903), this building was the site of the 1861 Secession Convention and the 1868 and 1890 Constitutional Conventions. After housing state offices from 1917-1959, the Old Capitol was restored and opened in 1961 as the state historical museum. Damaged by Hurricane Katrina in 2005, it was restored again and reopened in 2009.

As part of the renovation of the Old Capitol in 2009, the marker was replaced with the new marker Mississippi's Old Capitol. A new museum of history was built at 200 North Street, down the street. The Old Capitol is now a museum about the history of the building itself.
— Submitted June 29, 2016.
Credits. This page was last revised on November 8, 2017. It was originally submitted on June 28, 2016, by Don Morfe of Baltimore, Maryland. This page has been viewed 259 times since then and 7 times this year. Photos:   1, 2. submitted on June 28, 2016, by Don Morfe of Baltimore, Maryland. • Bernard Fisher was the editor who published this page.
Share this page.