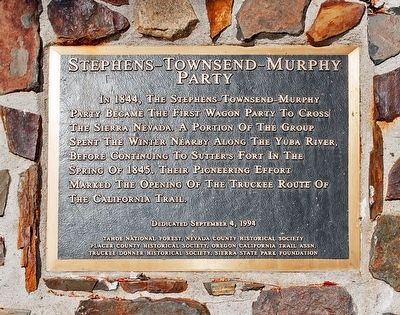 In 1844, the Stephens-Townsend-Murphy Party became the first wagon party to cross the Sierra Nevada. A portion of the group spent the winter nearby along the Yuba River, before continuing to Sutter's Fort in the spring of 1845. Their pioneering effort marked the opening of the Truckee Route of the California Trail.

Topics and series. This historical marker is listed in this topic list: Settlements & Settlers. In addition, it is included in the California Trail, and the Truckee Trail series lists. A significant historical year for this entry is 1844.

Other nearby markers. At least 8 other markers are within 3 miles of this marker, measured as the crow flies. Overland Emigrant Trail (here, next to this marker); Big Bend (within shouting 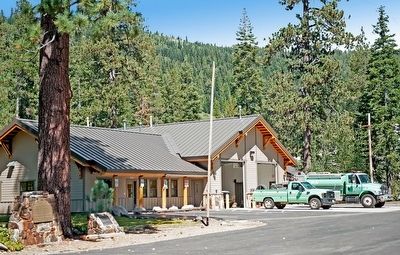 Photographed By Alvis Hendley
2. Stephens-Townsend-Murphy Party Marker
This marker and a marker for the Overland Emigrant Trail are located in front of the Big Bend Visitor Center.

More about this marker. This marker and a marker for the Overland Emigrant Trail are located in front of the Big Bend Visitor Center.

Also see . . .  Stephens-Townsend-Murphy Party. The Stephens-Townsend-Murphy party was a well organized party consisting of ten families who were seeking a better future for themselves in California. The fifty member group left Council Bluffs, Iowa on May 22, 1844. They left with a larger group of Oregon bound settlers in a group of forty wagons. (Submitted on June 29, 2016.) 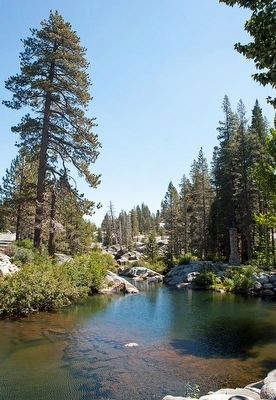