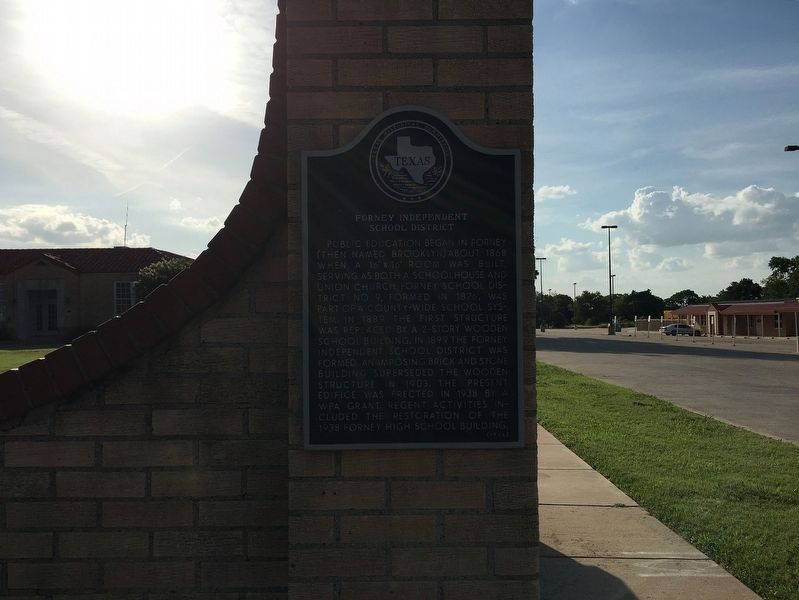 Public education began in Forney (then named Brooklyn) about 1868 when a 16' x 16' room was built, serving as both a schoolhouse and Union church. Forney School District No. 9, formed in 1876, was part of a county-wide school system. In 1889 the first structure was replaced by a 2-story wooden school building. In 1899 the Forney Independent School District was formed. An imposing brick and stone building superseded the wooden structure in 1903. The present edifice was erected in 1938 by a WPA grant. Recent activities included the restoration of the 1938 Forney High School building.

Click or scan to see
this page online
within walking distance of this marker. Forney High School Building (within shouting distance of this marker); William and Blanche Brooks House (about 800 feet away, measured in a direct line); McKellar House (approx. ¼ mile away); Dick P. Moore House (approx. 0.3 miles away); 1899 Automobile Trip (approx. 0.3 miles away); William Madison McDonald (approx. 0.3 miles away); Dixie Overland Highway (approx. 0.4 miles away); Walter Dickson Adams and the Adams Drugstore (approx. 0.4 miles away). Touch for a list and map of all markers in Forney.
Credits. This page was last revised on July 14, 2016. It was originally submitted on July 13, 2016, by Rheba Bybee of Seagoville, Texas. This page has been viewed 214 times since then and 26 times this year. Photo   1. submitted on July 13, 2016, by Rheba Bybee of Seagoville, Texas. • Bernard Fisher was the editor who published this page.