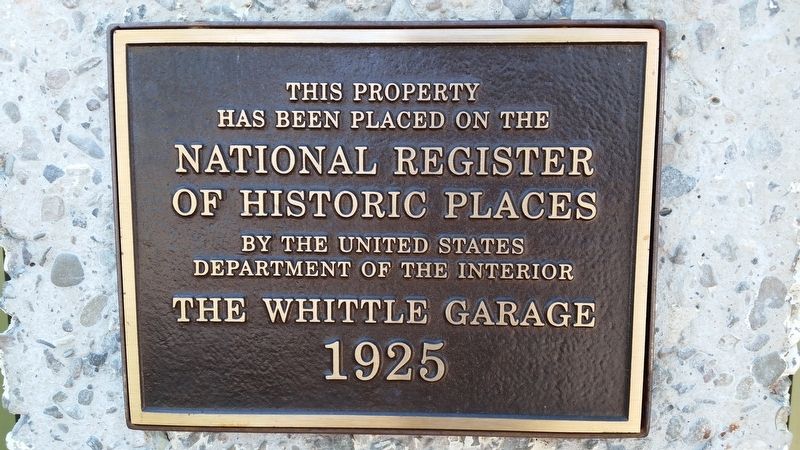 Photographed By Erik Christeson, July 20, 2016
1. The Whittle Garage Marker
Inscription.
The Whittle Garage. .
This property has been placed on the National Register of Historic Paces by the Unted States Department of the Interior the Whittle Garage 1925. . This historical marker was erected in 1925. It is in Ashland in Jackson County Oregon

Regarding The Whittle Garage. 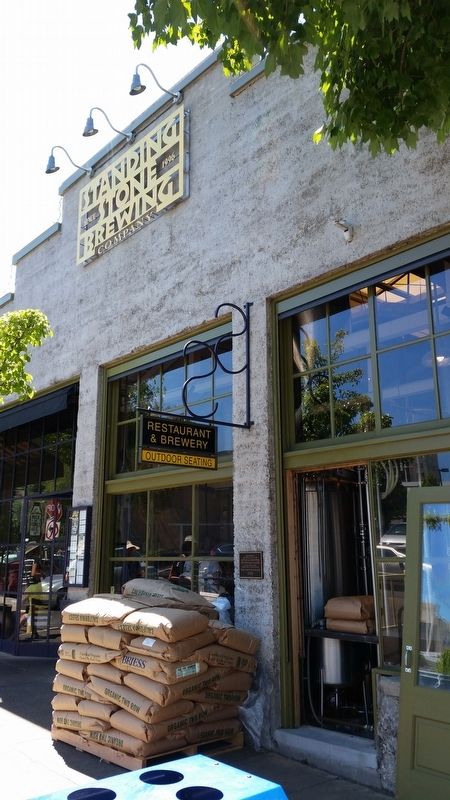 Click or scan to see
this page online
National Register #97000142

Also see . . .  A Bit of Ashland History: Whittle Garage. Floyd Whittle built his one-story, fire resistant, reinforced concrete structure and concrete floors to last. If he thought about how his building would be used in the future, surely a micro-brewery restaurant would not have entered his mind. After all, that was 1925, eight years before the 21st Amendment repealed Prohibition. And the Amarotico brothers, responsible for converting the Whittle Garage Building into the classy Standing Stone Brewing Co, surely have trouble believing that Whittle built that garage for $6,000. It took a half million dollars for them to renovate the garage before it was suitable for public assembly in 1997. ssbuild1By the time Whittle arrived in 1909, Ashland, founded in 1850, had already developed a substantial industrial base. Whittle formed a moving and storage operation, and in 1925 built a new industrial building in the commercial area. The plan he chose was an adaptation of the Falsefront form used extensively in the towns of Oregon since 1850. The extended facade gave the appearance that a one-story building was larger and more formidable than it was; it also hid the simple gables and sloped roofs from the public view. During the early years of the 20th century, the automobile became the main source of personal travel. New buildings were needed to accommodate the growing businesses needed to service the cars, while existing buildings were simply modified. (Submitted on July 21, 2016, by James King of San Miguel, California.)
Credits. This page was last revised on October 20, 2020. It was originally submitted on July 21, 2016, by James King of San Miguel, California. This page has been viewed 245 times since then and 13 times this year. Last updated on July 22, 2016, by James King of San Miguel, California. Photos:   1, 2. submitted on July 21, 2016, by James King of San Miguel, California. • Syd Whittle was the editor who published this page.
Share this page.