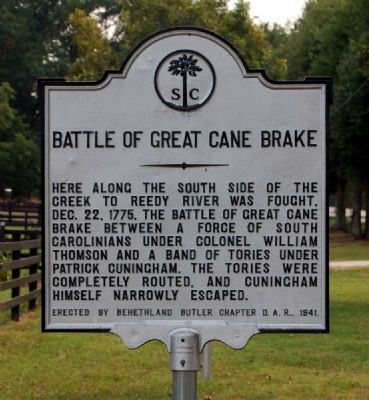 Photographed By Brian Scott, October 12, 2010
1. Battle of Great Cane Break Marker -
Current Location on Fork Shoals Road
Inscription.
Battle of Great Cane Brake. . , Here along the south side of the creek to Reedy River was fought, Dec. 22, 1775, the Battle of Great Cane Break, between a force of South Carolinians under Colonel William Thompson and a band of Tories under Patrick Cuningham. The Tories were completely routed and Cuningham himself narrowly escaped. . This historical marker was erected in 1941 by Behethland Butler Chapter, Daughters of the American Revolution. It is in Simpsonville in Greenville County South Carolina

Here along the south side of the creek to Reedy River was fought, Dec. 22, 1775, the Battle of Great Cane Break, between a force of South Carolinians under Colonel William Thompson and a band of Tories under Patrick Cuningham. The Tories were completely routed and Cuningham himself narrowly escaped.

Topics and series. This historical marker is listed in these topic lists: Patriots & Patriotism • War, US Revolutionary. In addition, it is included in the Daughters of the American Revolution (DAR) series list. A significant historical date for this entry is December 22, 1775.

Location. 34° 39.367′ N, 82° 18.983′ W. Marker is in Simpsonville, South Carolina, in Greenville County. Marker is on Fork Shoals Road south of Old Hundred Road (County Road 565), on the right when traveling north. Touch for map. Marker is in this post office area: Simpsonville SC 29680, United States of America. Touch for directions.

Other nearby markers. At least 8 other markers are within 4 miles of this marker, measured as the crow flies. Hopkins Farm (within shouting distance of this marker); Toney's Store / Militia Muster Ground (within 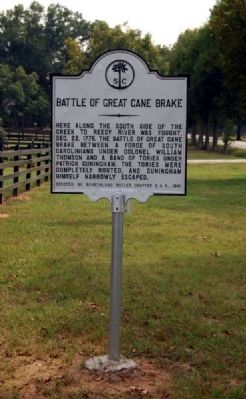 Also see . . .
1. Reminiscences of a Pioneer by Colonel William Thompson. ebook links for downloading a copy of Thompson's autobiography. (Submitted on February 2, 2009, by Brian Scott of Anderson, South Carolina.)

3. The Snow Campaign. RootsWeb entry:
It was November, in 1775. Colonel Richard Richardson led his Camden regiment of South Carolina militia into the Back Country, the wilderness piedmont of the Appalachian mountains. Their purpose was to crush Tory resistance to the rebellion against the King. (Submitted on February 2, 2009, by Brian Scott of Anderson, South Carolina.) 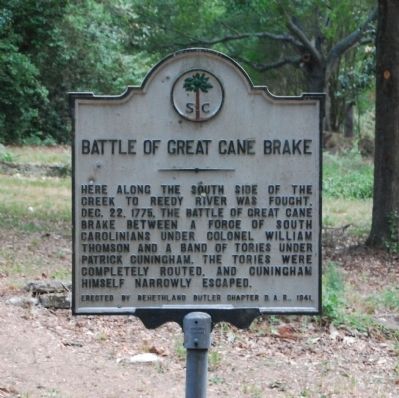 Years before any significant penetration of British redcoats into the upcountry, acute factionalism spurred conflict here. The Provincial Congress, whose delegates were leaders in the cause for liberty, first met in Charleston in January 1775. They ordered Col. Richard Richardson to "silence the discontents of the backcountry" and "deliver up the bodies of all principal offenders" -- those loyal to the British government. By mid-December he had gathered a formidable force of over 4,000 and they were hot on the heels of the elusive Tory leader, Patrick Cunningham. Richardson learned he was camped near the Cherokee lands on the Reedy River and sent a detachment of 1,300 men under Col. William Thomson on an all-night 25-mile march in pursuit. The Patriots attacked the sleeping Loyalists at the break of dawn. Cunningham jumped out of bed, mounted his horse bareback, and shouted to his men to "shift" for themselves as he narrowly escaped to the Indian lands. Due to the cool-headedness and restraint of Colonel Richardson, few Loyalists were 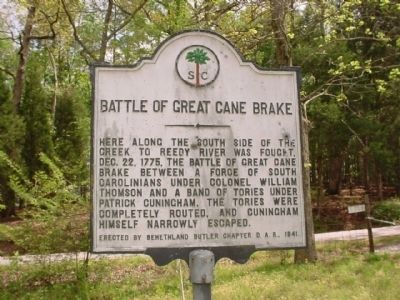 Photographed By Rev. Harry Lee Long, May 22, 2003
4. Battle of Great Cane Brake Marker
This sign was later stolen not long after I took this photo.
Editor's Note: It has since been replaced.
killed, but the Patriot victory netted 130 prisoners as well as much-needed supplies, arms, and ammunition. (Source: South Carolina's Revolutionary War Battlefields: A Tour Guide (2002), R.L. Barbour, pages 14-15)
— Submitted November 14, 2008, by Brian Scott of Anderson, South Carolina.
2. Battle of Great Cane Break Celebration - 1st Saturday in December
The Sons Of the American Revolution and the Veterans Service Corps will be holding our celebration of the battle of the Great Canebrake. The battle was the largest Revolutionary War battle fought in Greenville County. The program is held on the first Sat in Dec. at 11 am at 338 S. Harrison Bridge Rd in Simpsonville. There will be special music, speakers, period firing teams, color guards and much more. To get to the Canebrake take I-385 south from Greenville and exit on Fairview Rd. Go south for 3 miles and just past Unity Church turn right on Hew Harrison Bridge Rd. Go 2 miles and turn left on South Harrison Bridge Rd and go half mile to Canebrake. For more info call 864-201-3389.
— Submitted November 14, 2008, by Brian Scott of Anderson, South Carolina.
3. Major Patrick Cunningham
This officer, a brother of Brigadier-General 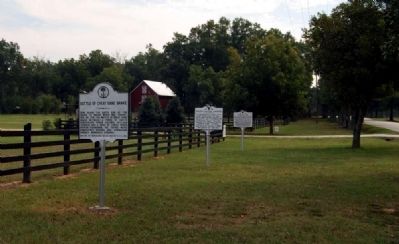 Photographed By Brian Scott, October 12, 2010
5. Battle of Great Cane Brake Marker -
Current Location on Fork Shoals Road
Robert Cunningham, was an active loyalist from the outset of the Revolutionary war. As a participant in the siege of Ninety-Six he was one of the signatories to the treaty of neutrality of 22 November, 1775 (see p. 70). Major Patrick Cunningham and his party of loyalists attempted to rescue his brother, Robert, from his captors while being taken to Charleston as a prisoner, but failed in the attempt (see p. 87). He was, however, compensated for this failure by his capture of the ammunition sent as a gift by the Americans for the Cherokee Indians (see p. 64). A member of this party was William Gist, who took up arms "to protect some loyalists who had taken a magazine of powder which was sent by the rebels to the Indians." (The Royal Commission on Loyalist Claims, 1788-1785, ed. by H. E. Egerton; Roxburghe Club, 1915, p. 56; Moultrie, Memoirs, Vol. I. pp. 96-100.)

Patrick Cunningham was appointed in 1780 to the command of a corps of loyal militia, consisting of 24 officers and 155 men, forming a part of the brigade of militia in the district of Ninety Six, commanded by his brother, Robert.

Great was the joy of the Americans at the capture of so dangerous a loyalist as Patrick Cunningham, who was condemned to a term of imprisonment in Charleston jail. Shortly after his release he offered his services to Major Andrew Williamson for his expedition against the Cherokee 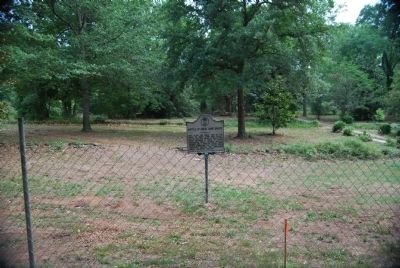 Photographed By Brian Scott, July 7, 2008
6. Battle of Great Cane Brake Marker -
Original Location on South Harrison Bridge Road
"The actual battle site is unknown, as it was a 'running battle,' but close to the creek and now on private property." (Source: South Carolina's Revolutionary War Battlefields: A Tour Guide (2002), R.L. Barbour, page 15)
Indians in July, 1776, an expedition which was accompanied by Alexander Chesney and other loyalists, though the Cherokees at this time were supposed to be allies of the British. Williamson, however, refused the offer of Cunningham's services, as he did that of Richard Pearis on the same occasion (Drayton, Memoirs, Vol. II, pp. 343-4). (See pp. 65.)

Major Patrick Cunningham in or about 1785 returned to South Carolina and was elected a member of the Legislature, dying in 1794 (Sabine, Loyalists of the American Revolution, Vol. I, p. 348). (Source: Contributions in History and Political Science, Issue 7 by Ohio State University pgs 104-105.)
— Submitted October 13, 2010, by Brian Scott of Anderson, South Carolina. 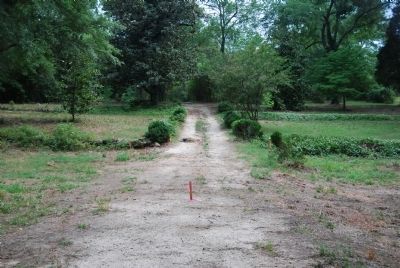 Photographed By Brian Scott, July 7, 2008
7. Road Leading Through the Property 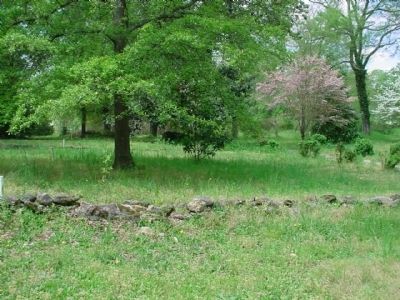 Photographed By Rev. Harry Lee Long, May 22, 2003
8. Battle of Great Cane Brake Marker
As a child, I use to go to Cane Break many times to walk the area and to think about all the lives that were given for the freedom of our beautiful state. Photo taken from the road above the old wellhouse, to the left of the drive way. About a 100 yards from here stood old slave cabins that burnt down in the late 1960's. Two barns were left standing until they also burnt down one night in the early 1970s. 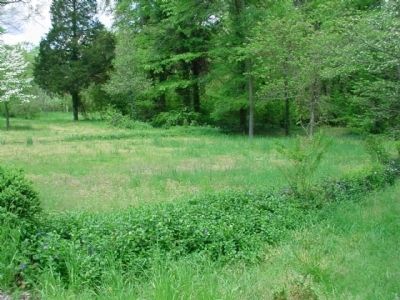 Photographed By Rev. Harry Lee Long, May 22, 2003
9. Battle of Great Cane Brake Marker
Taken when I came home to visit. I always come back to Cane Break to see what changes have taken place since I moved away. This photo was taken to the right of the driveway. As a child, I would take my 22 rifle and imagine fighting the English. Such is a boy's dream, fighting for something you believe in. 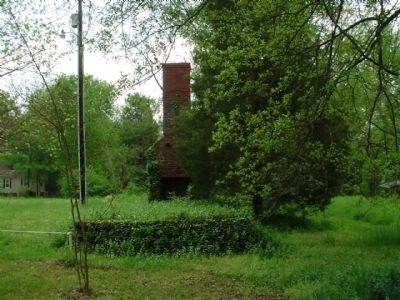 Photographed By Rev. Harry Lee Long, May 22, 2003
10. Battle of Great Cane Brake Marker
This is all that stands of an old slave house. If memory does not fail me, as I was growing up, there was only 5 original buildings left standing of the ole plantation. 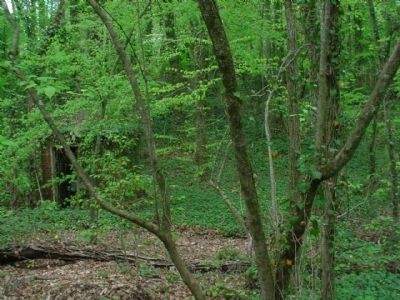