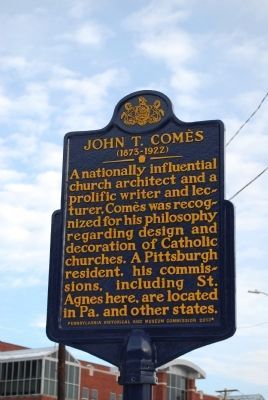 Photographed By Mike Wintermantel, January 27, 2013
1. John T. Comès Marker
Immediately after its unveiling.
Inscription.
John T. Comès. A nationally influential church architect and a prolific writer and lecturer. Comès was recognized for his philosophy regarding design and decoration of Catholic churches. A Pittsburgh resident, his commissions, including Saint Agnes here, are located in Pennsylvania and other states. . This historical marker was erected in 2013 by Pennsylvania Historical and Museum Commission. It is in Pittsburgh in Allegheny County Pennsylvania

A nationally influential church architect and a prolific writer and lecturer. Comès was recognized for his philosophy regarding design and decoration of Catholic churches. A Pittsburgh resident, his commissions, including Saint Agnes here, are located in Pennsylvania and other states.

Topics and series. This historical marker is listed in these topic lists: Architecture • Churches & Religion. In addition, it is included in the Pennsylvania Historical and Museum Commission series list.

Location. Marker has been permanently removed. It was located near 40° 26.27′ N, 79° 57.894′ W. Marker was in Pittsburgh, Pennsylvania, in Allegheny County. Marker was at the intersection of Fifth Avenue and Robinson Street, on the right when traveling west on Fifth Avenue. Located to the left of the steps to the main entrance of St. Agnes Center of Carlow University. Touch for map. Marker was in this post office area: Pittsburgh PA 15213, United States of America. Touch for directions. 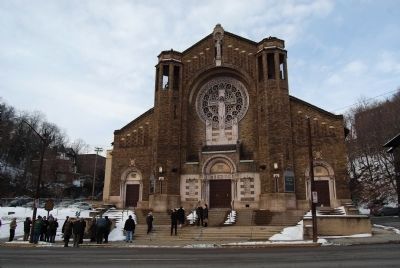 Photographed By Mike Wintermantel, January 27, 2013
2. John T. Comès Marker
To the left of the main entrance to St. Agnes Center.

More about this marker. This marker placed here for its visibility to passing traffic. The former Saint Agnes Roman Catholic Church is a fine example of the design philosophy and architectural style of this Pittsburgh architect

Regarding John T. Comès. During the first two decades of the twentieth century, John T. Comès was Pittsburgh’s most active and prominent ecclesiastical architect. He was Roman Catholic and his commissions stemmed largely from that religious body. Five styles suited Comѐs—Italianate or Italian Renaissance Revival, Romanesque Revival, English Gothic Revival, Spanish Renaissance Revival, and Lombardy (a form of Romanesque Revival). He left behind a sizable legacy in church architecture design and decoration. To learn more, visit www.johntcomes.com 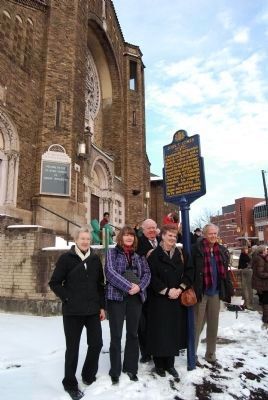 Photographed By Mike Wintermantel, January 27, 2013
3. John T. Comès Marker
Surrounded by descendents of John Comès after the unveiling.
1. The John T. Comès marker dedication
On January 27, 2013, I attended the dedication ceremony of the John T. Comès Historical Marker at St. Agnes Center of Carlow University (formerly St. Agnes Church) in Pittsburgh's Oakland Section. Being January in Pittsburgh, most of the dedication ceremony was held inside St. Agnes Center, except for the unveiling which took place outside. An invocation was said by Father James Garvey, former pastor of Ephiphany Roman Catholic Church in uptown Pittsburgh. A welcome from Carlow University President Dr. Mary Hines. Acknowledgements by Mr. David McMunn, the historical marker sponsor and fundraiser. A proclamation by Pittsburgh's Mayor Hon. Luke Ravenstahl stating that Tuesday January 29, 2013 will be known as John T. Comès day in the City of Pittsburgh, the anniversary of Mr. Comès' birthday. Architectural viewpoints by Mr. Albert Tannler and Mr. Kevin Scott, AIA. Descendents of John Comès were also in attendance and assisted in the unveiling of the marker.
— Submitted January 27, 2013, by Mike Wintermantel of Pittsburgh, Pennsylvania.
2. Marker removed.
In mid-March 2020, Carlow University employees removed the marker after local media reported the school planned to demolish what is now known as St. Agnes Center.
The Pennsylvania Historical & Museum Commission, said the marker is state property so the school did not have the legal right to move it. 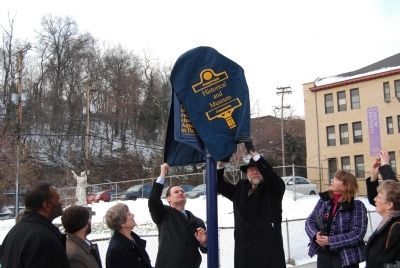 Photographed By Mike Wintermantel, January 27, 2013
4. John T. Comès Marker
Being uncovered by City of Pittsburgh Mayor Luke Ravenstahl and Senator John Heinz History Center President and CEO Mr. Andrew Masich
Carlow officials assured that the marker is in a safe place.
The University noted that it removed the plaque because they were concerned that most people don't understand that the plaque honors the architect and does not mean that the building is a landmark.
— Submitted May 7, 2020, by Mark Hilton of Montgomery, Alabama.