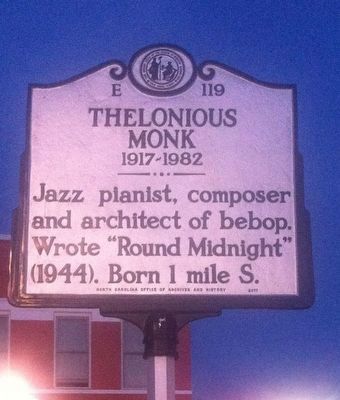 Topics and series. This historical marker is listed in these topic lists: African Americans • Arts, Letters, Music • Entertainment. In addition, it is included in the North Carolina Division of Archives and History series list. A significant historical year for this entry is 1944. 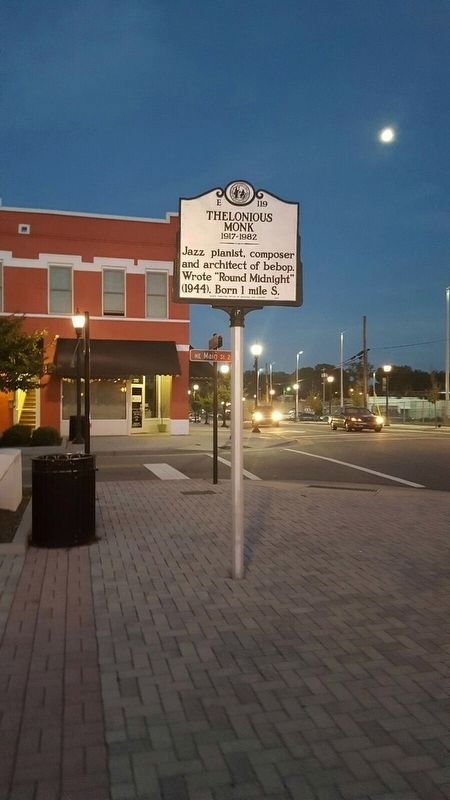 Also see . . .
1. Thelonious Monk Biography. In the link the reader will find a video clip describing the life of Thelonious Monk, they will also find quick facts about his career and also giving his official date of birth and death. If the reader wishes they can also read an article about his early career and some of his achievements as well as information about his family. (Submitted on September 13, 2016, by Zoe Denise Atkinson of Rocky Mount, North Carolina.)

2. Thelonious Monk Biography. In the link the reader will find information of the life, legacy and music of Thelonious Monk. (Submitted on September 13, 2016, by Zoe Denise Atkinson of Rocky Mount, North Carolina.)

3. Wikipedia Entry. Thelonious Sphere Monk (1917–1982) was an American jazz pianist and composer. He had a unique improvisational style and made numerous contributions to the standard jazz repertoire, including ‘’Round 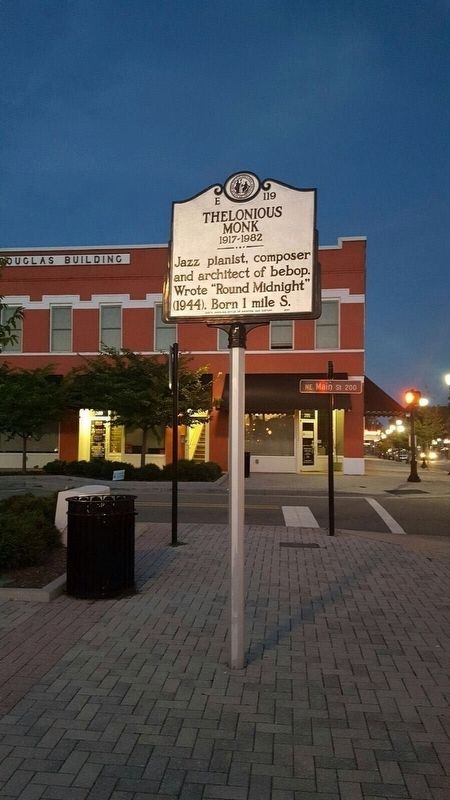 Photographed By Zoe Denise Atkinson, September 13, 2016
3. Thelonious Monk Marker
Midnight,’ ‘Blue Monk,’ ‘Straight, No Chaser,’ ‘Ruby, My Dear,’ ‘In Walked Bud,’ and ‘Well, You Needn’t.’ ... Monk’s compositions and improvisations feature dissonances and angular melodic twists and are consistent with his unorthodox approach to the piano, which combined a highly percussive attack with abrupt, dramatic use of switched key releases, silences, and hesitations. ... Monk was renowned for a distinct look which included suits, hats, and sunglasses. He was also noted for an idiosyncratic habit during performances: while other musicians continued playing, Monk stopped, stood up and danced for a few moments before returning to the piano. (Submitted on February 24, 2018.) 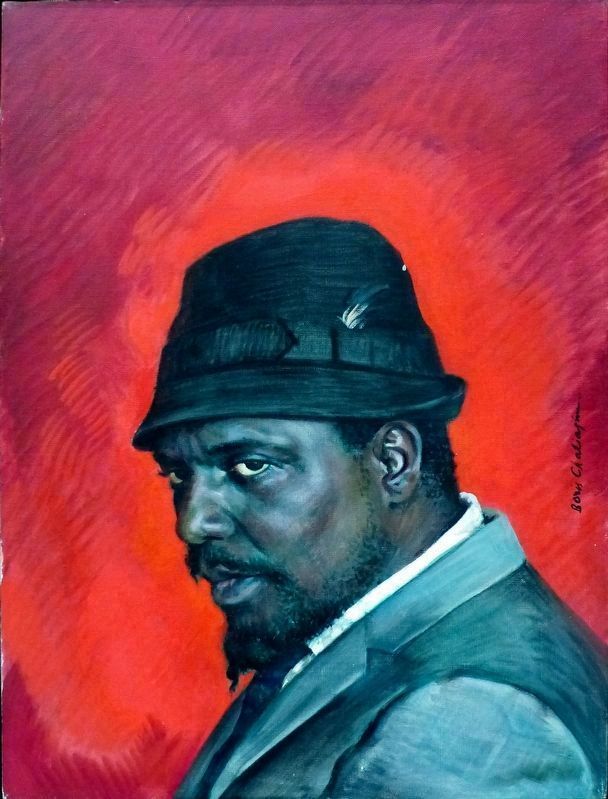 “A leader of the postwar jazz revolution, Thelonious Monk along with Dizzy Gillespie and Charlie Parker sparked the 'bebop' movement, a jazz style faster and more frenetic than the swing that had held sway since the thirties. Monk's piano style has been called eccentric: 'his melodies were angular, his harmonies full of jarring clusters.' His recording career took off in the mid-1950s, and he won an enthusiastic following, often playing with such other avant-garde musicians as John Coltrane and Sonny Rollins. His compositions 'Round Midnight,' 'Blue Monk,' and 'Epistrophy' are considered classics of modern jazz.” — National Portrait Gallery
Credits. This page was last revised on June 29, 2021. It was originally submitted on September 13, 2016, by Zoe Denise Atkinson of Rocky Mount, North Carolina. This page has been viewed 811 times since then and 105 times this year. It was the Marker of the Week February 25, 2018. Photos:   1, 2, 3. submitted on September 13, 2016, by Zoe Denise Atkinson of Rocky Mount, North Carolina.   4. submitted on August 3, 2017, by Allen C. Browne of Silver Spring, Maryland. • Bernard Fisher was the editor who published this page.
Share this page.