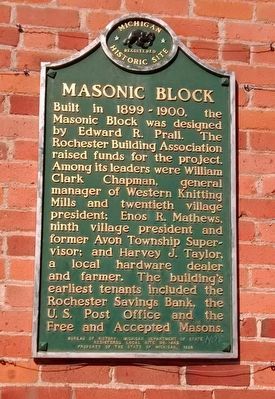 By Joel Seewald, October 4, 2016
1. Masonic Block Marker
Inscription.
Masonic Block. . Built in 1899-1900, the Masonic Block was designed by Edward R. Prall. The Rochester Building Association raised funds for the project. Among its leaders were William Clark Chapman, general manager of Western Knitting Mills and twentieth village president; Enos R. Mathews, ninth village president and former Avon Township Supervisor; and Harvey J. Taylor, a local hardware dealer and farmer. The building's earliest tenants included the Rochester Savings Bank, the U.S. Post Office and the Free and Accepted Masons. . This historical marker was erected in 1988 by Bureau of History, Michigan Department of State. It is in Rochester in Oakland County Michigan

Marker series. This marker is included in the Michigan Historical Commission marker series. 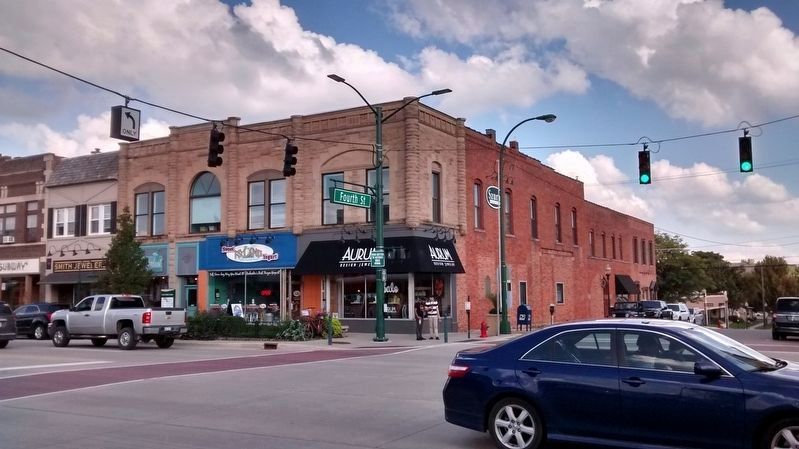 By Joel Seewald, October 4, 2016
2. Masonic Block and Marker
Marker is above the fire hydrant.
walking distance of this marker. Rochester Opera House (a few steps from this marker); Three-faced Clock (within shouting distance of this marker); Rollin Sprague Building (about 500 feet away, measured in a direct line); City of Rochester, Michigan (about 600 feet away); Western Knitting Mills (about 600 feet away); Township Hall (about 800 feet away); The Hammer (approx. 0.2 miles away); George Vandeventer House (approx. 0.2 miles away). Touch for a list and map of all markers in Rochester.