Twenty-Fifth President of the United States 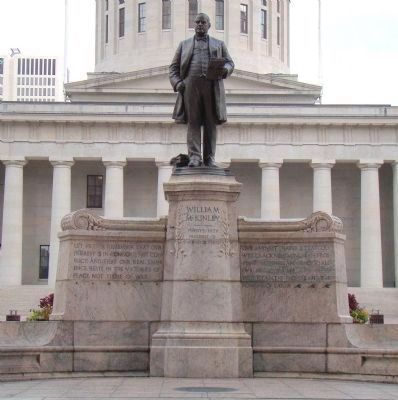 Photographed By J. J. Prats, July 12, 2008
1. William McKinley Monument
Inscription.
William McKinley. Twenty-Fifth President of the United States. “Let us ever remember that our interest is in concord, not conflict; and that our real eminence rests in the victories of peace, not those of war.” , “Our earnest prayer is that God will graciously vouchsafe prosperity, happiness and peace to all our neighbors, and like blessings to all the peoples and the powers of Earth.” , “The fame of such a man will shine like a beacon through the mists of ages, an object of reverence, of imitation, and of love.” , Born at Niles, Ohio, January 29, 1843. Died at Buffalo, N.Y., September 14, 1901. . This historical marker was erected in 1906 by the State of Ohio and the citizens of Columbus. It is in Columbus in Franklin County Ohio

“Let us ever remember that our interest is in concord, not conflict; and that our real eminence rests in the victories of peace, not those of war.”

“Our earnest prayer is that God will graciously vouchsafe prosperity, happiness and peace to all our neighbors, and like blessings to all the peoples and the powers of Earth.”

“The fame of such a man will shine like a beacon through the mists of ages—an object of reverence, of imitation, and of love.”

Erected 1906 by the State of Ohio and the citizens of Columbus.

Topics and series. This historical marker is listed in this topic list: Government & Politics. In addition, it is included in the Former U.S. Presidents: #25 William McKinley 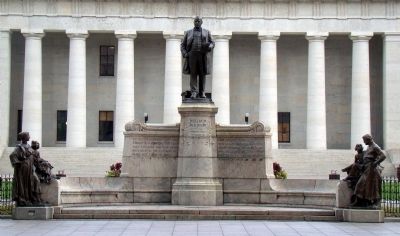 Click or scan to see
this page online
series list. A significant historical month for this entry is January 1777.

More about this marker. The first two quotes are by McKinley. The third, on the back of the monument, by John Hay. William McKinley was the 25th President of the United States (1896-1901) and presided over the Spanish-American War. He was assassinated in office. 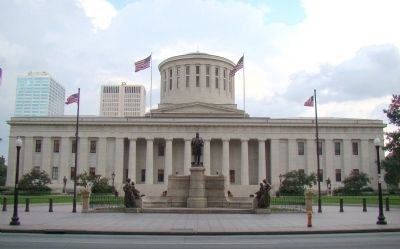 Photographed By J. J. Prats, July 12, 2008
3. William McKinley Monument at the Ohio State House
1. Hermon A. MacNeil - Images of Sculptures and life work. Launched in April 2010, this Web Gallery celebrates Hermon Atkins MacNeil, American sculptor. Trained in the Beaux Arts school of Paris, he led a generation of American sculptors who designed and sculpted for public monuments, coins, parks, World's Fairs, State Capitols, U. S. Supreme Court, and other buildings across to nation. He captured many fading Native American images of the Nineteenth century in the realism of this classic style. (Submitted on March 28, 2011, by Dan Leininger of Sioux Falls, South Dakota.) 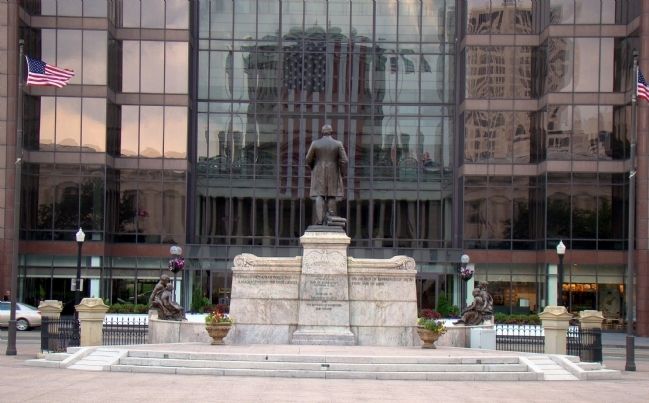 Photographed By J. J. Prats, July 12, 2008
4. William McKinley Faces Office Building Across High Street
gave his last public speech on September 5, 1901 at the Pan-American Exposition in Buffalo, New York. He was assassinated there the following day.

“Gentlemen, let us ever remember that our interest is in concord, not conflict, and that our real eminence rests in the victories of peace, not those of war. We hope that all who are represented here may be moved to higher and nobler effort for their own and the world’s good, and that out of this city may come not only greater commerce and trade for us all, but, more essential than these, relations of mutual respect, confidence and friendship, which will deepen and endure.

“Our earnest prayer is that God will graciously vouchsafe prosperity, happiness and peace to all our neighbors and like blessings to all the peoples and powers of earth.”
— Submitted August 3, 2008.
2. “William McKinley” by John Hay
From an address in the United States Senate by John Hay (1838–1905), Secretary of State under Presidents McKinley and Theodore 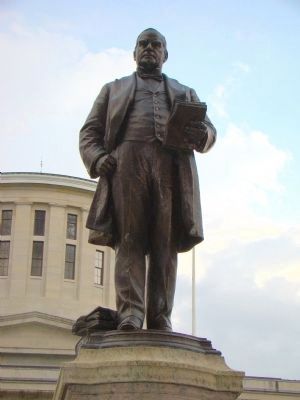 For the third time the Congress of the United States are assembled to commemorate the life and the death of a President slain by the hand of an assassin. The attention of the future historian will be attracted to
the features which reappear with startling sameness in all three of these awful crimes: the uselessness, the utter lack of consequence of the act; the obscurity, the insignificance of the criminal; the blamelessness—so far as in our sphere of existence the best of men may be held blameless—of the victim. Not one of our murdered Presidents had an enemy in the world; they were all of such preeminent purity of life that no pretext could be given for the attack of passional crime; they were all men of democratic instincts, who could never have offended the most jealous advocates of equality; they were of kindly and generous nature, to whom wrong or injustice was impossible; of moderate fortune, whose slender means nobody could envy. They were men of austere virtue, of tender heart, of eminent abilities, which they had devoted with single minds to the good of the republic. If ever men walked 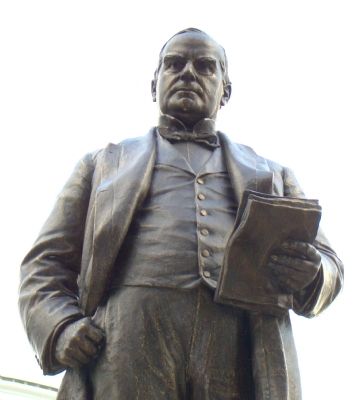 Photographed By J. J. Prats, July 12, 2008
6. William McKinley
before God and man without blame, it was these three rulers of our people. The only temptation to attack their lives offered was their gentle radiance—to eyes hating the light that was offense enough.

The obvious elements which enter into the fame of a public man are few and by no means recondite. The man who fills a great station in a period of change, who leads his country successfully through a time of crisis; who, by his power of persuading and controlling others, has been able to command the best thought of his age, so as to leave his country in a moral or material condition in advance of where he found it—such a man’s position in history is secure. If, in addition to this, his written or spoken words possess the subtle qualities which carry them far and lodge them in men’s hearts; and, more than all, if his utterances and actions, while informed with a lofty morality, are yet tinged with the glow of human sympathy—the fame of such a man will shine like a beacon through the mists of ages—an object of reverence, of imitation, and of love. It should be to us an occasion of solemn pride that 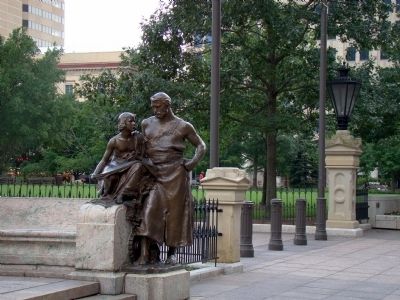 Photographed By J. J. Prats, July 12, 2008
7. Industry and Trade
in the three great crises of our history such a man was not denied us. The moral value to a nation of a renown such as Washington’s and Lincoln’s and McKinley’s is beyond all computation. No loftier ideal can be held up to the emulation of ingenuous youth. With such examples we cannot be wholly ignoble. Grateful as we may be for what they did, let us be still more grateful for what they were. While our daily being, our public policies, still feel the influence of their work, let us pray that in our spirits their lives may be voluble, calling us upward and onward.

There is not one of us but feels prouder of his native land because the august figure of Washington presided over its beginnings; no one but vows it a tenderer love because Lincoln poured out his blood for it; no one but must feel his devotion for his country renewed and kindled when he remembers how McKinley loved, revered, and served it, showed in his life how a citizen should live, and in his last hour taught us how a gentleman could die.
— Submitted August 3, 2008.
3. 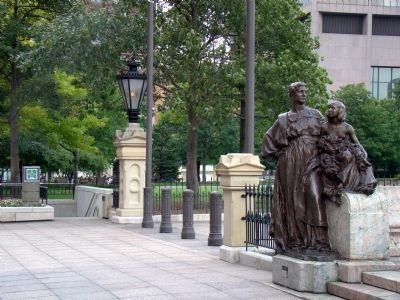 Photographed By J. J. Prats, July 12, 2008
8. Peace and Prosperity
H. A. MacNeil Sculpted the McKinley Monument
Hermon Atkins MacNeil (1866-1947) sculpted this monument consisting of the statue of President McKinley and the two accompanying grouping of figures on either side. These extra figures seek to represent the values that McKinley lived out and for which grieving citizens chose to remember him.

Industry & Trade are symbolized by the first group. The man of great strength instructs the youthful student beside him. Here the artist seeks to depict strength and wisdom being passed on to the next generation. The other figures, a gracious woman ( "Prosperity" ) with her arm encircling a little maiden ( "Peace" ) are meant by MacNeil to symbolize those ideals as well as the joy and virtues of domestic life. These female figures are placing the palm leaves and flowers of peace over the sword and helmet of war.

MacNeil commented twenty years after completing this monument that while he worked very hard on sculpting the portrait of the President, he could follow his fancy in making the other figures. They only needed to convey the values 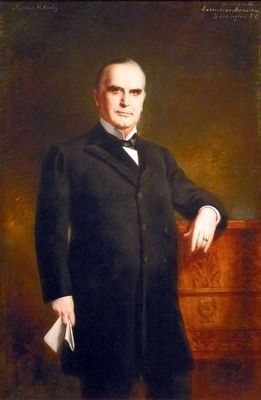 “William McKinley's ‘front porch‘ campaign for the White House in 1896 consisted mainly of speeches delivered to well-wishers flocking by train to his Canton, Ohio, home. As president, the main focus of his administration lay in responding to calls for aid in Cuba's struggle against Spanish rule. Although reluctant to meddle, McKinley felt obliged to act when the American battleship Maine blew up in Havana harbor, and interventionists blamed it on the Spanish. The result was the Spanish-American War, which led to Cuba's independence and Spain's surrender of the Philippines, Puerto Rico, and Guam to the United States. Despite his own doubts about this turn of events, McKinley made the traditionally isolationist United States more visible in international politics.

One of several portraits derived from 1897-98 sittings at the White House, August Benziger's likeness testifies to McKinley's blandly funereal appearance. But housed in that uninteresting exterior was an unusual supply of warmth and charm that, as one observer put it, made McKinley ‘a marvelous manager of men.’” — National Portrait Gallery
and ideals consistent with McKinley and the Monument's purpose there on the Capitol Plaza. He considered them all some of his finest works. Note To Editor only visible by Contributor and editor
— Submitted March 18, 2011, by Dan Leininger of Sioux Falls, South Dakota.
Credits. This page was last revised on December 2, 2019. It was originally submitted on August 3, 2008, by J. J. Prats of Powell, Ohio. This page has been viewed 3,823 times since then and 97 times this year. Photos:   1, 2, 3, 4, 5, 6, 7, 8. submitted on August 3, 2008, by J. J. Prats of Powell, Ohio.   9. submitted on September 9, 2015, by Allen C. Browne of Silver Spring, Maryland.
Share this page.