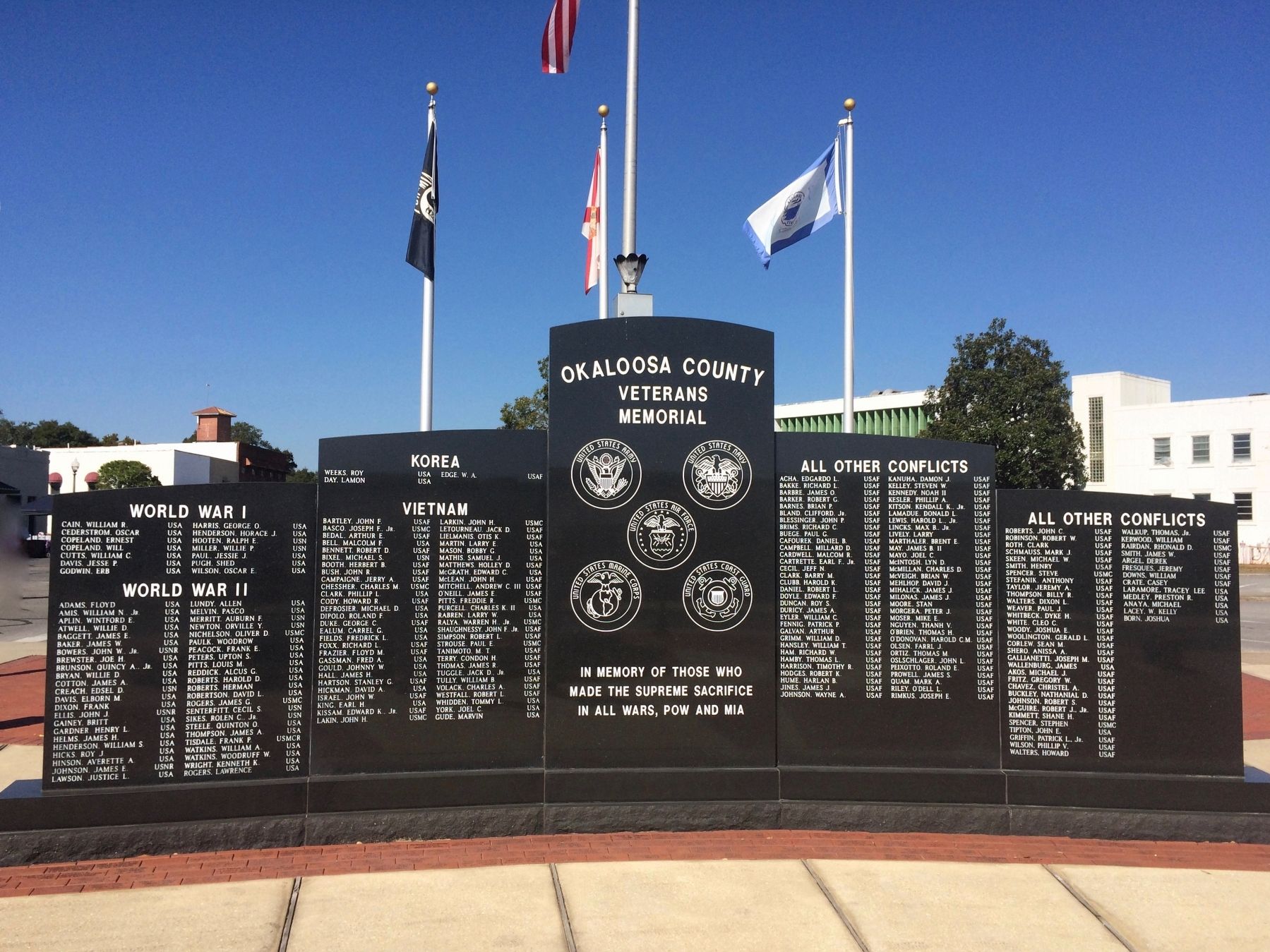 In memory of those who
made the supreme sacrifice
in all wars, POW and MIA 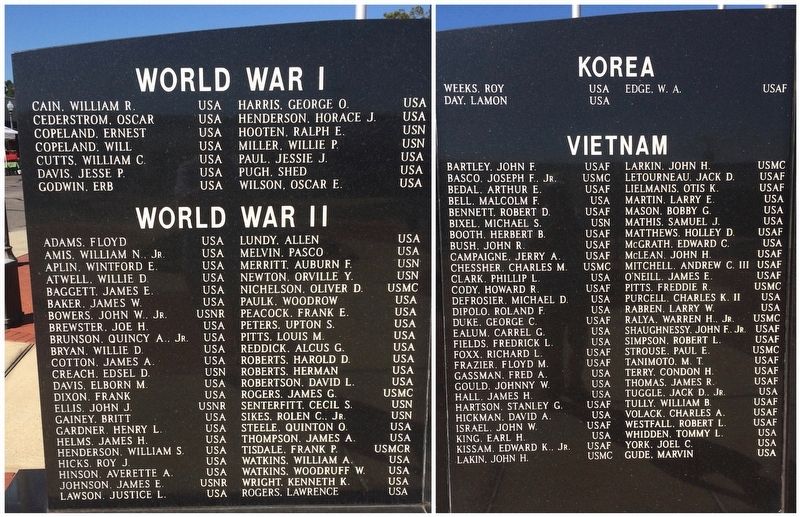 Click or scan to see
this page online
Other Conflicts Veterans) 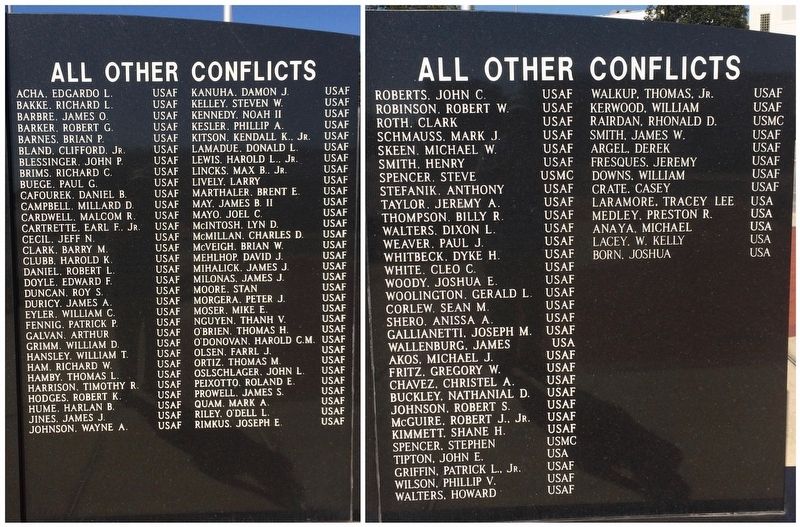 The idea of a memorial to honor service people killed on active duty who were from Okaloosa County or who had gone through training at Eglin, Hurlburt or Duke Field originated with George H. Whitehurst, longtime Mayor of Crestview.

Early in 2000 George called his longtime

Photographed By Mark Hilton, October 29, 2016
4. Rear side of Okaloosa County Veterans Memorial showing services & POW/MIA symbol.
friend Bob Lynn and spoke to him about his idea. Together they decided it was a “do-able” project. The two put together a plan and gathered information on cost factors. In November 2000 they went before the Okaloosa County Commission, seeking permission to lease the south terrace of the Okaloosa County Courthouse for the memorial.

The Celebration 2000 committee, made up of a cross-section of the county, was formed to work together to put on the end-of-the-century event. The committee had some money left in their account; and they voted to give that money to the Okaloosa County Veterans Memorial (O.C.V.M.).

In March 2001 the newly formed O.C.V.M. Committee, composed of 20 people — many mayors, city council persons, chamber of commerce members, OWCC representatives, military affairs officers and retired educators — met to discuss the estimated costs for the project. It was divided into two phases. Phase I, with an estimated cost of $75,000, would 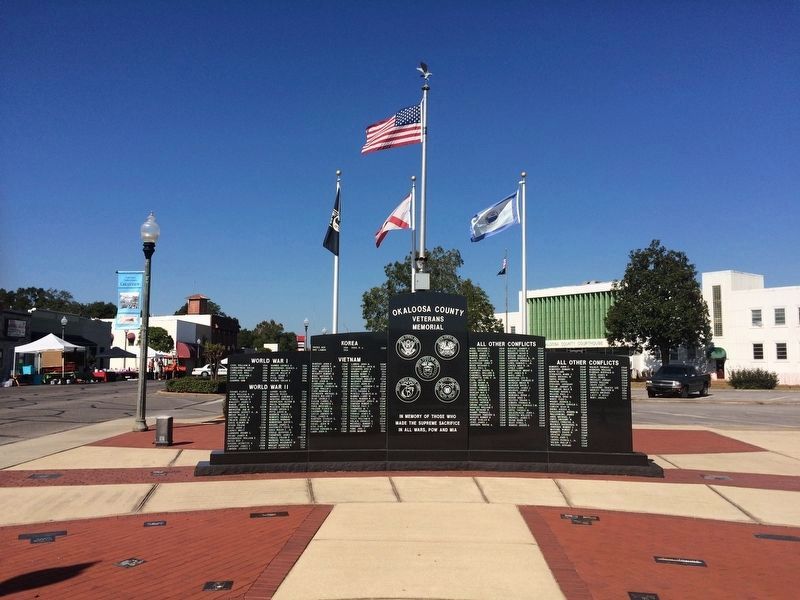 Photographed By Mark Hilton, October 29, 2016
5. Okaloosa County Veterans Memorial Plaza on south side of County Courthouse.
Current courthouse is scheduled for demolition soon with a new courthouse to be built, in same location, possibly in 18-24 months.
include the actual memorial, four flag poles, brick pavers, lights for the flags, the eternal flame, a fountain and landscaping. Phase II, estimated to cost $75,000, would include the Amish Country Gazebo, landscaping, concrete, lights and sound system, and additional brick pavers. Total cost was estimated to be $150,000, and the committee hoped to be able to raise that money in two years with donations from individuals, companies and government agencies.

The O.C.V.M. filed papers with the Florida Secretary of State to be named a Florida not-for-profit corporation. They applied to the Florida Department of Agriculture and Consumer Services for permission to solicit contributions. They obtained a Federal Employee Identification Number (although there would be no paid employees). Finally, a 501-C-3 status was applied for with the Internal Revenue Service, and was received 28 days after — in “record short time.” On July 6, 2001, the committee had jumped through all the necessary hoops, and they were ready to start fundraising.

Over the next several months the committee met to discuss progress and expand ideas. Meetings were held in Cinco Bayou, Crestview and Fort Walton Beach about every two months. Whitehurst, the president and founder, met with each city council in the county; the Okaloosa School District; the County Commission; and numerous companies in the endeavor to raise funds. The concept of the memorial park was well-received everywhere it was introduced.

Committee members went to festivals, fairs and any other type of event where there were people to see the memorial drawings. Donations were taken from Laurel Hill to Destin, and from Tallahassee to Pensacola.

On June 28, 2002, the memorial arrived, along with a huge crane to set it up. The black onyx for the memorial was mined in Africa and was shipped to Georgia in pieces that were as large as compact cars. The memorial is 10 feet tall, 22 feet long, weighs 28,000 pounds and has the names of about 200 service people killed on active duty. The design drawing was beautiful; but it could not capture how moving and lovely the finished memorial would be. In two days the memorial was up; then the brick pavers and fountain were installed. Next, the four flagpoles went up, and, finally, the eternal flame. Phase I was completed and paid for.

On October 25, 2002, the Amish Country Gazebo arrived on two 18-wheelers from Lancaster County, Pennsylvania. From the feel of the smooth finish, to the blend of the natural colors and the way each piece fit together, it was obvious that the people who built it were true master craftsmen. Within a week the Gazebo was up and the brick pavers were in. Next came the lights, sound system and landscaping. Phase II was nearing completion, and it, too, was paid for.

In 18 months — six months before the two-year deadline — the O.C.V.M. had raised $149,234.80. And additional money was still coming in! The people of Okaloosa County demonstrated their commitment to this worthwhile memorial with great generosity.