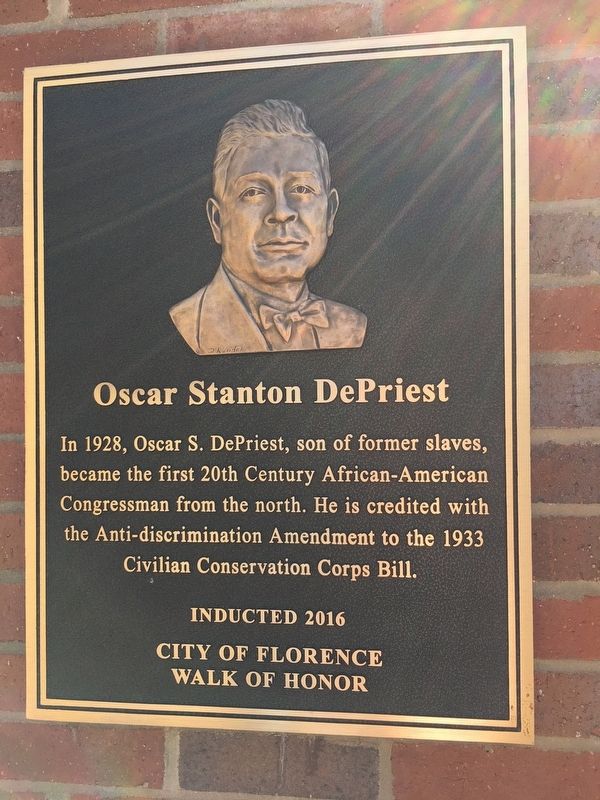 By Sandra Hughes, November 4, 2016
1. Oscar Stanton DePriest Marker
Inscription.
Oscar Stanton DePriest. City of Florence Walk of Honor. , In 1928, Oscar S. DePriest, son of former slaves, became the first 20th Century African-American Congressman from the north. He is credited with the Anti-discrimination Amendment to the 1933 Civilian Conservation Corps Bill. . This historical marker was erected in 2016 by City of Florence. It is in Florence in Lauderdale County Alabama

In 1928, Oscar S. DePriest, son of former slaves, became the first 20th Century African-American Congressman from the north. He is credited with the Anti-discrimination Amendment to the 1933 Civilian Conservation Corps Bill.

Topics. This historical marker is listed in these topic lists: African Americans • Government & Politics. A significant historical year for this entry is 1928.

Location. 34° 48.358′ N, 87° 37.89′ W. Marker is in Florence, Alabama, in Lauderdale County. Marker is on Hightower Place. Behind Marriott Shoals in Heritage Park Walk of Honor. Touch for map. Marker is at or near this postal address: 10 Hightower Place, Florence AL 35630, United States of America. Touch for directions.

Also see . . .
1. Oscar Stanton DePriest House. National Park Service website entry:
During his three terms (1928-1935), as the only black representative in Congress, De Priest introduced several anti-discrimination bills. His 1933 amendment barring discrimination in the Civilian Conservation Corps was passed by the Senate and signed into law by President Roosevelt. A second anti-lynching bill failed, even though it did not make lynching a federal crime. A third proposal--a bill to permit a transfer of jurisdiction if a defendant believed he or she could not get a fair trial because of race or religion--would be passed by another Congress in another era. (Submitted on November 5, 2016, by Sandra Hughes Tidwell of Killen, Alabama, USA.)