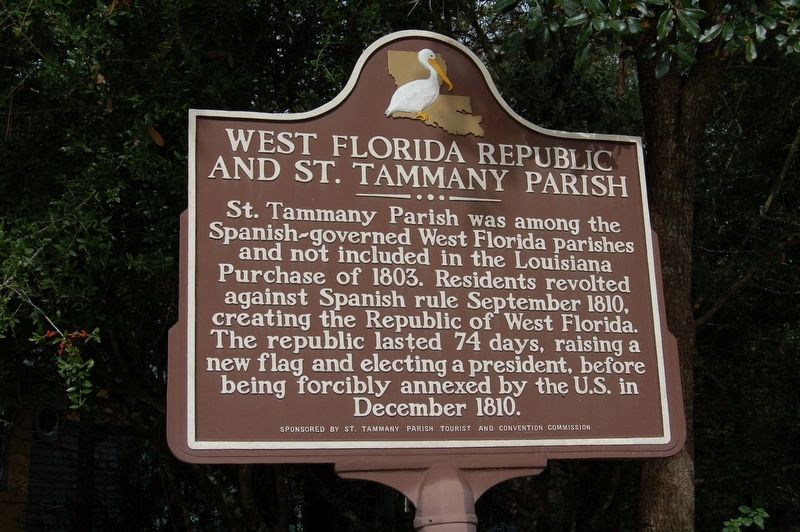 St. Tammany Parish was among the Spanish-governed West Florida parishes and not included in the Louisiana Purchase of 1803. Residents revolted against Spanish rule September 1810, creating the Republic of West Florida. The republic lasted 74 days, raising a new flag and electing a president, before being forcibly annexed by the U.S. in December 1810.

Other nearby markers. At least 8 other markers are within 5 miles of this marker, measured as the crow flies. Greater Mandeville Veterans Memorial (approx. 3.8 miles away); Abita Springs (approx. 4.4 miles away); Our Lady Of The Lake Church 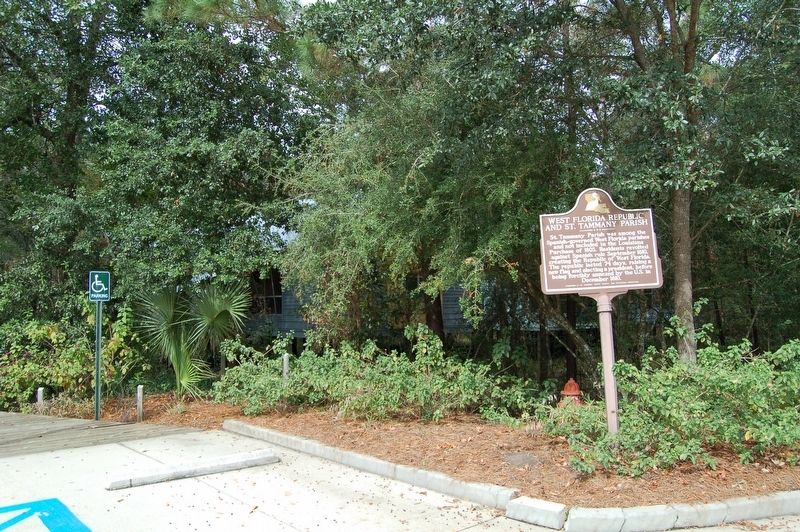 Also see . . .  200th anniversary of the Republic of West Florida marked in St. Tammany. ...The parish celebrated the republic's bicentennial Thursday afternoon with a flag-raising ceremony and the unveiling of the text of a historic marker that soon will stand at the St. Tammany Parish Tourist Commission office near Mandeville. Parish President Kevin Davis offered a proclamation in honor of the bicentennial, and Donna O'Daniels, the commission's president and CEO, read a timeline of events describing what led to the historic day exactly 200 years ago and what the rebellion meant for Louisiana.... In 1810, the Spanish ruled the area known as West Florida, which stretched from the Mississippi River east to the Perdido River, now the Alabama-Florida state line. Both American and British settlers, primarily those who lived in present-day Louisiana, wished to be free from Spain's rule and joined in an uprising to declare their independence....The rebels raised a new flag -- the Bonnie Blue -- proclaimed St. Francisville as the capital and elected a president, though his term was short-lived. The United States annexed the republic in December 1810.... The Louisiana Purchase in 1803 included all or part of 14 current states and two Canadian provinces, but not the so-called Florida Parishes -- East Baton Rouge, East and West Feliciana, St. Helena, Livingston, Tangipahoa, Washington and St. Tammany, then under Spanish rule. And when Louisiana became a state in April 1812, the Florida Parishes were excluded from the deal.... (Submitted on November 11, 2016.)
Credits. This page was last revised on November 11, 2016. It was originally submitted on November 11, 2016, by Cajun Scrambler of Assumption, Louisiana. This page has been viewed 336 times since then and 4 times this year. Photos:   1, 2. submitted on November 11, 2016.
Share this page.