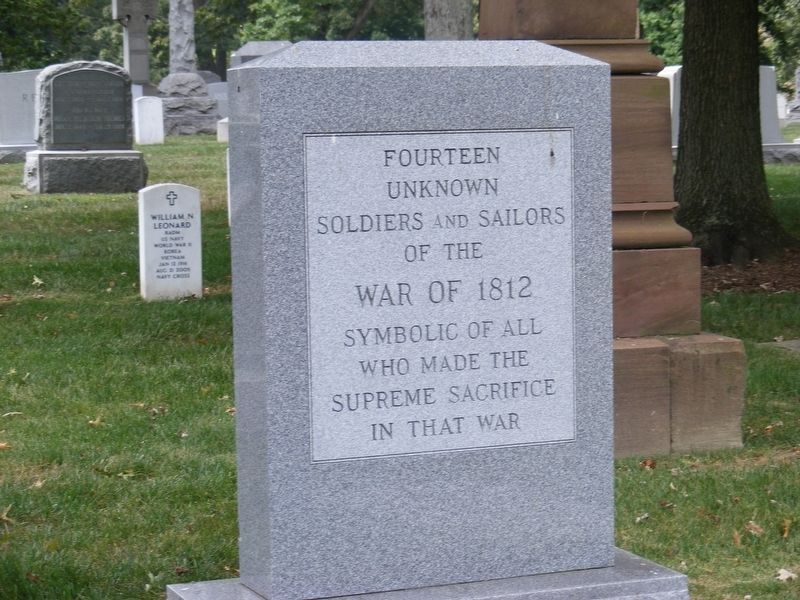 By Don Morfe, August 14, 2009
1. War of 1812 Memorial Marker
Inscription.
War of 18 12 Memorial. .
Fourteen Unknown Soldiers and Sailors of the War of 18 12 Symbolic of all who made the supreme sacrifice in that war. . This memorial is in Arlington National Cemetery in Arlington County Virginia

Fourteen
Unknown
Soldiers and Sailors
of the
War of 1812

Symbolic of all
who made the
supreme sacrifice
in that war

Topics and series. This memorial is listed in this topic list: War of 1812. In addition, it is included in the National Cemeteries series list.

Also see . . .  Remembering the unknown dead of the War of 1812.
So much attention is given the Tomb of the Unknowns, but there are actually more than 400 unknowns buried throughout Arlington National Cemetery. Fourteen soldiers and sailors from the War of 1812 are buried together in Section 1 not far from the Custis-Lee House. Go past the Pan American 103 red stone memorial and nearly enter the woods before the granite marker is on the left.
The 14 soldiers were discovered in 1905 by workers at the Washington Navy Yard. The monument was erected in 1976 by the National Society of the United States Daughters of the War of 1812. (Submitted on November 15, 2016, by J. Makali Bruton of Querétaro, Mexico.)
Credits. This page was last revised on November 15, 2016. It was originally submitted on November 14, 2016, by Don Morfe of Baltimore, Maryland. This page has been viewed 223 times since then and 3 times this year. Photo   1. submitted on November 14, 2016, by Don Morfe of Baltimore, Maryland. • Bernard Fisher was the editor who published this page.
Share This Page.