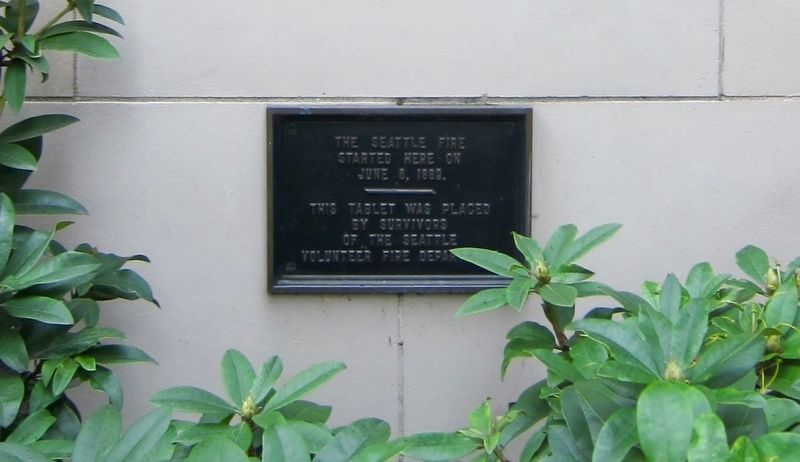 
Erected by The Survivors of the Seattle Volunteer Fire Department.

Topics. This historical marker is listed in this topic list: Disasters. A significant historical date for this entry is June 6, 1889. 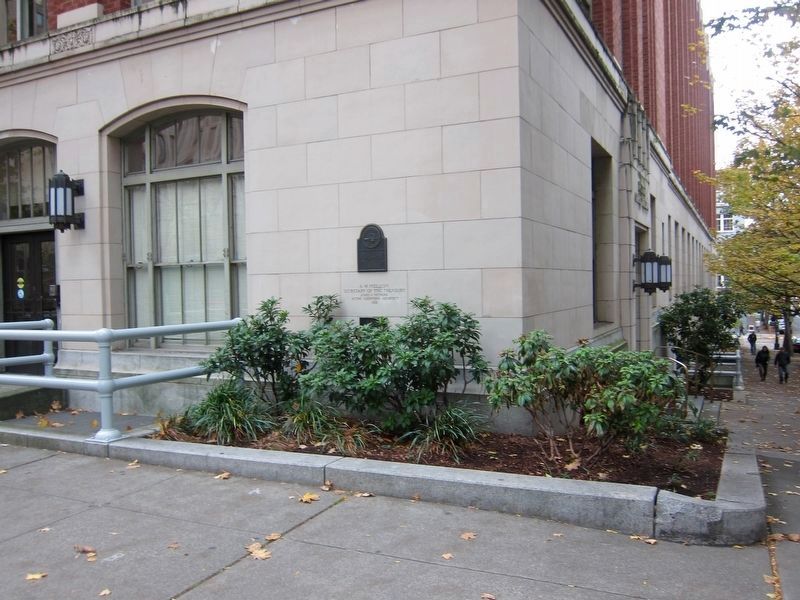 By Andrew Ruppenstein, October 24, 2016
2. Start of Seattle Fire Site Marker - Wide View
The top of the marker is visible here just peeking above the bushes. The larger plaque above it indicates that the site is a Washington State Registered State Historic Place, but provides no other information (and so is not entered as a separate entry).

Also see . . .
1. Great Seattle Fire. Wikipedia entry:
The Great Seattle Fire was a fire that destroyed the entire central business district of Seattle, Washington, on June 6, 1889. The fire burned for several hours, destroying 25 blocks and causing as much as $20 million in damage ($527 million in today's dollars). As a result of the fire, streets in the Pioneer Square neighborhood in Seattle were elevated 22 feet (6.7 m) above the pre-fire street level and new buildings made of wood were banned. (Submitted on November 15, 2016.)

2. Seattle burns down in the Great Fire on June 6, 1889. HistoryLink entry:
At about 2:30 p.m. on June 6, 1889, a pot of glue bursts into flames in Victor Clairmont's basement cabinet shop at the corner of Front (1st Avenue) and Madison streets. Efforts to contain the fire fail and it quickly engulfs the wood-frame building. Thanks to a dry spring and a brisk wind, the flames spread, and volunteer firefighters tap out the town's 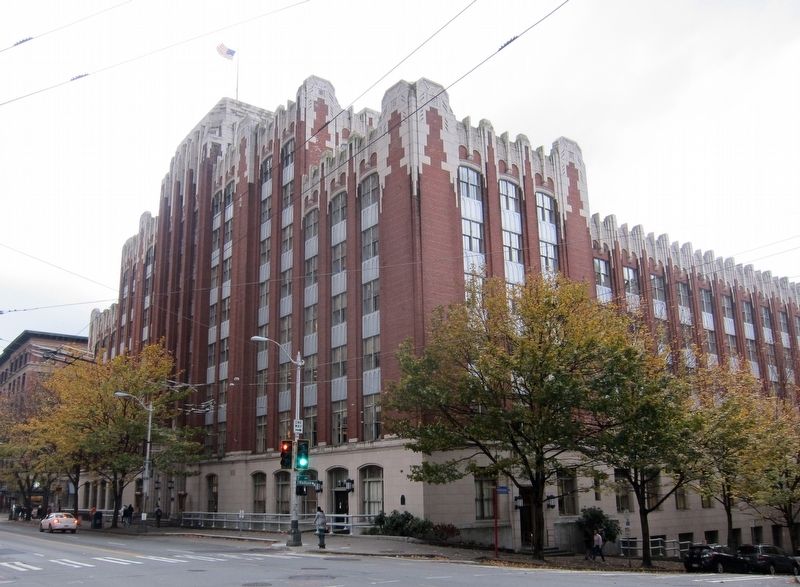 By Andrew Ruppenstein, October 24, 2016
3. Start of Seattle Fire Site Marker - Wider View
The marker site is visible here at the corner of the USPS Building.
inadequate, privately owned watermains. By sunset, some 64 acres lie in smoldering ruins. This event is known as Seattle's Great Fire. (Submitted on November 15, 2016.) 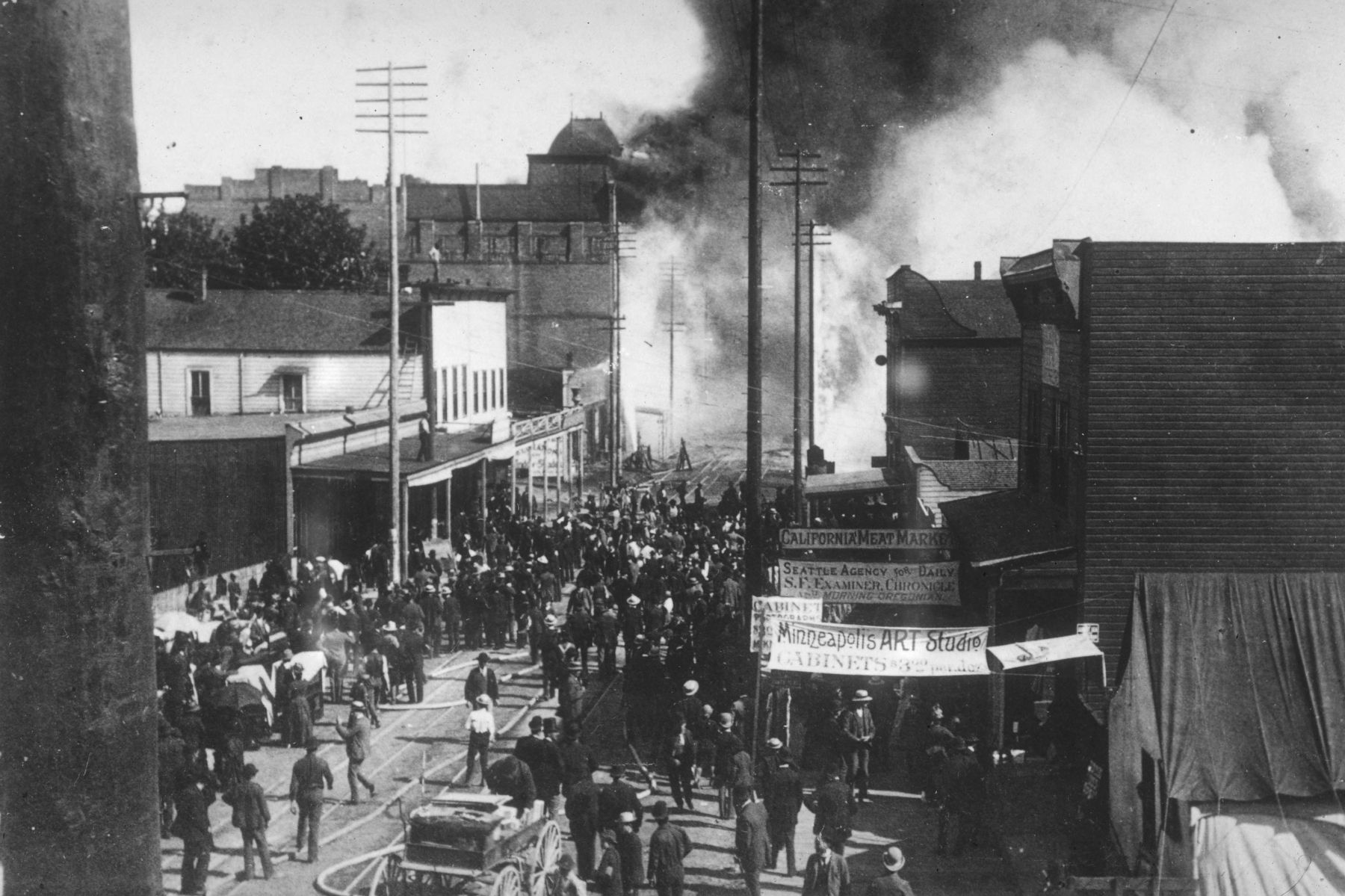 Boyd and Braas (image courtesy of the Seattle Municipal Archives), June 6, 1889
4. Seattle's Great Fire 1889 - Looking south down Front Street (now 1st Avenue) from Spring Street
The Great Fire of June 6, 1889 was a significant turning point in Seattle's history and changed both the physical and political landscapes of the City. The fire started at 2:30 p.m. in a paint and woodwork shop at Front and Madison and over the course of the next 18 hours swept a southward across 100 acres of Seattle's business district and waterfront. The fire left little standing in its wake, consuming buildings, docks, wooden sidewalks, and anything else combustible. Losses from the conflagration were estimated at $20 million. - Seattle Municipal Archives
Credits. This page was last revised on January 23, 2021. It was originally submitted on November 15, 2016, by Andrew Ruppenstein of Sacramento, California. This page has been viewed 269 times since then and 8 times this year. Photos:   1, 2, 3, 4. submitted on November 15, 2016, by Andrew Ruppenstein of Sacramento, California.
Share this page.