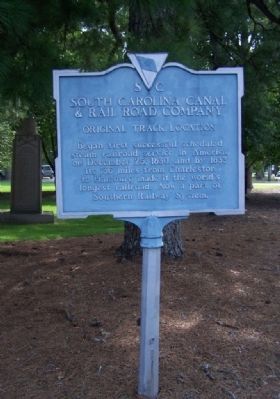 Began first successful scheduled steam railroad service in America on December 25, 1830, and by 1833 its 136 miles from Charleston to Hamburg made it the world’s longest railroad. Now part of Southern Railway System. (Marker Number 2-1.)

Topics. This historical marker is listed in these topic lists: Notable Places • Railroads & Streetcars. A significant historical month for this entry is December 1835. 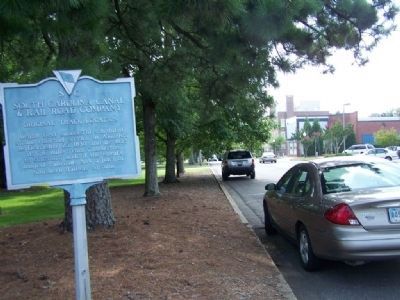 Regarding South Carolina Canal & Rail Road Company. A group of Charleston, South Carolina businessmen incorporated the South Carolina Rail Road and Canal Company (SCRRCC) in December 1827. William Aiken, one of South Carolina’s leading cotton merchants, served as president of the company between 1829 and 1831. SCRRCC wanted to develop a transportation link between Charleston and Augusta that would redirect trade that was going down the river to Savannah. Horatio Allen, an engineer from New York, selected the route from Charleston. Allen was nationally famous for supervising the first railroad in America, a short line for the Delaware and Hudson Canal Company. He was also the first person in the western hemisphere to drive a locomotive.7 The railroad line ran along the
ridge between the Ashley and Cooper Rivers, crossed the Edisto River, and then turned west,following ridges towards Augusta and terminating in Hamburg, SC opposite Augusta. Between 1830 and 1833, the SCRRCC constructed the 136‐mile, single‐track line from
Charleston 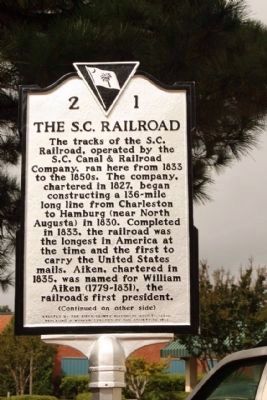 By Mike Stroud, September 28, 2010
3. South Carolina Canal & Rail Road Company Marker, REPLACED with new version
*See nearby marker
to Hamburg, creating the longest passenger railroad in the world at the time. It had three sections. The main section connected Charleston to Edisto Bridge (today known as Branchville), where the line branched into east and west lines. The eastern section went to Columbia. The western section passed through the towns of White Pond, Windsor, and Montmorenci, before reaching Hamburg. The western section was completed in the fall of1833

2. The South Carolina Canal and Rail Road Company. Also called the Charleston to Hamburg Railroad, the South Carolina Railroad, or the Sola, this enterprise produced the first large scale steam railroad in the world. (Submitted on March 14, 2009, by Brian Scott of Anderson, South Carolina.) 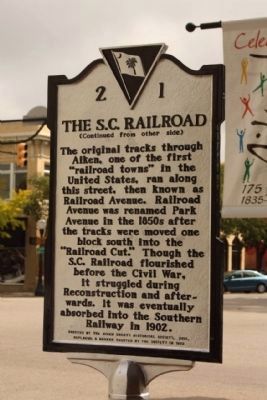