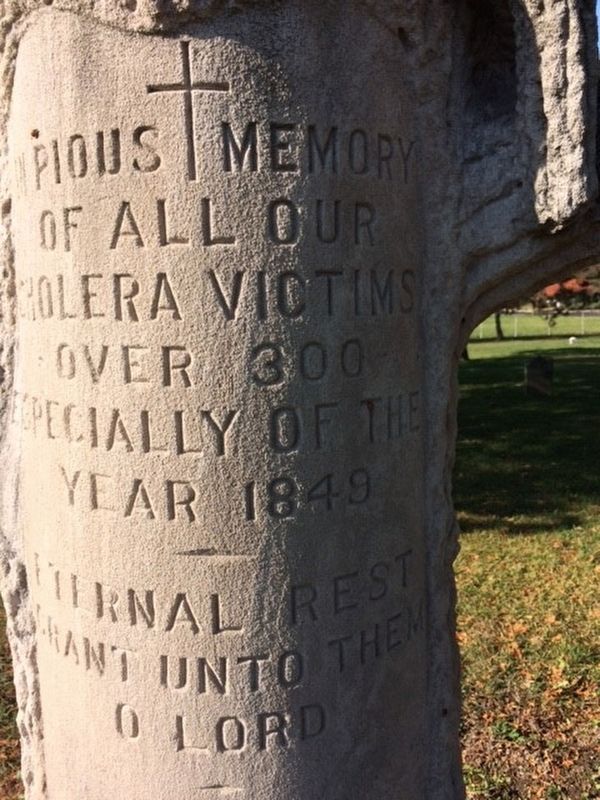 Photographed By Michael Baker
1. Cholera Marker Marker
Inscription.
Cholera Marker. . In pious memory of all our cholera victims over 300 especially of the year 1849 Eternal rest grant unto thee O Lord Erected in 1937 . This historical marker was erected in 1937. It is in Minster in Auglaize County Ohio

Topics. This historical marker is listed in these topic lists: Cemeteries & Burial Sites • Disasters. A significant historical year for this entry is 1849.

Location. 40° 23.081′ N, 84° 22.854′ W. Marker is in Minster, Ohio, in Auglaize County. Marker can be reached from East 1st Street, on the right when traveling east. Located in the cemetery near the historic small chapel. Touch for map. Marker is in this post office area: Minster OH 45865, United States of America. Touch for directions. 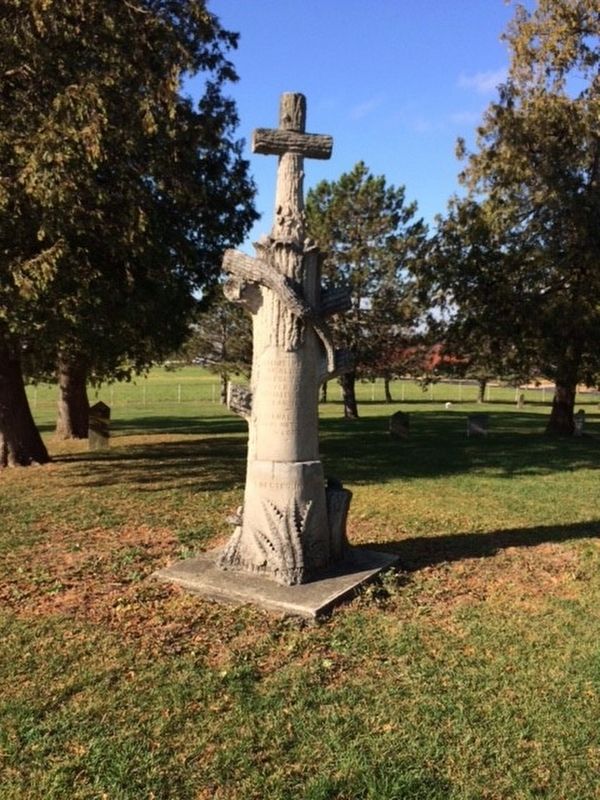 Click or scan to see
this page online
"Cholera of 1833
In the summer of 1833 the first attack of the Asiatic cholera visited this territory and although it was in a mild form many of the settlers took sick. Stallo became alarmed and whenever new settlers were expected, he would meet them south of town and warn them. On the day that he met John Henry and Mary Elizabeth Shulte, a young couple from Cincinnati, he told them that he would probably not see them again. He died the next day on July 26th, 1833 a victim of this cholera. No known list has been found as of this date naming other victims.

Cholera of 1849
The year of 1849 will ever be remembered in the history of Minster. The cholera epidemic swept over the entire country, taking thousands of lives. In some cases whole families were carried away within a week.

The plague descended upon the people of Minster in the latter part of June. During the months of July and August the people died so rapidly that the bodies were collected twice each day and buried in four tiers in two trenches each seven feet wide on the west portion of the cemetery. No funeral arrangements, no religious service, no weeping relatives to follow, just wrapped in a plain shroud, placed in a crude wooden box and taken by some surviving friend to the last resting place.

The neighbors would then burn all personal effects in hopes of halting the disease. Any 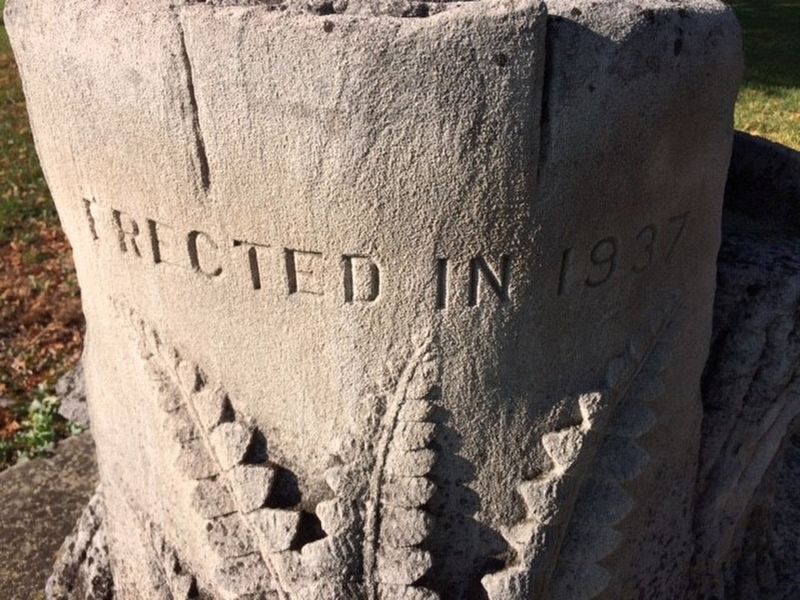 Photographed By Michael Baker
3. Cholera Marker Marker
surviving children were taken in by the nearest friend or relative and raised as their own. Thru this, original family names of many were changed, which accounts for the disconnected history of some of our citizens. The cholera took over 250 lives in a short time from Minster."

Additional commentary.
1.
On the maintenance building is a unique metal engraved plaque showing grave locations in the cemetery including the trenches where cholera victims were buried 4 deep in long rows.
— Submitted December 2, 2016, by Michael Baker of Lima, Ohio. 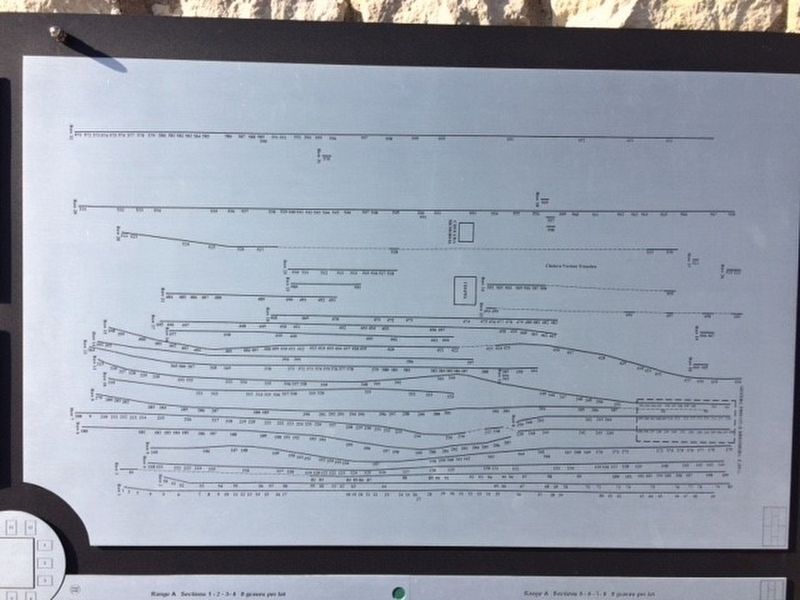 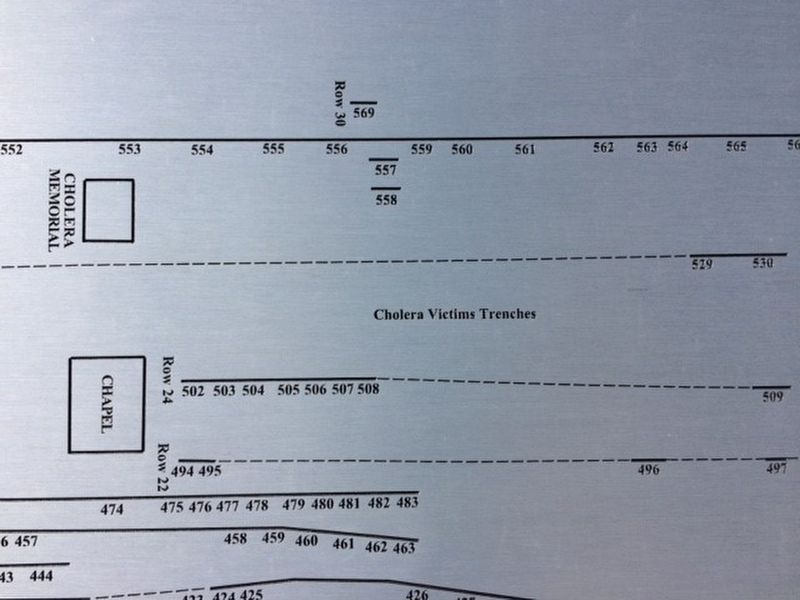