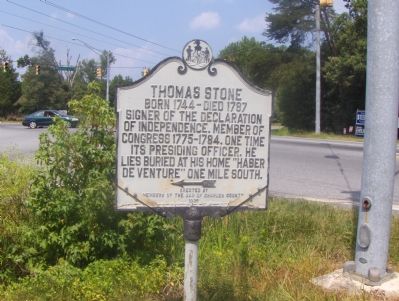 By Roger Dean Meyer, August 20, 2006
1. Thomas Stone Marker
Inscription.
Thomas Stone. Born 1744-Died 1787. Signer of the Declaration of Independence. Member of Congress 1775-1784. One time its presiding officer. He lies buried at his home “Haber de Venture” one mile south. . This historical marker was erected in 1932 by Members of the Bar of Charles County. It is Near Port Tobacco in Charles County Maryland

Signer of the Declaration of Independence. Member of Congress 1775-1784. One time its presiding officer. He lies buried at his home “Haber de Venture” one mile south.

Erected 1932 by Members of the Bar of Charles County.

Topics and series. This historical marker is listed in these topic lists: Colonial Era • War, US Revolutionary. In addition, it is included in the Signers of the Declaration of Independence series list.

Other nearby markers. At least 5 other markers are within 2 miles of this marker, measured 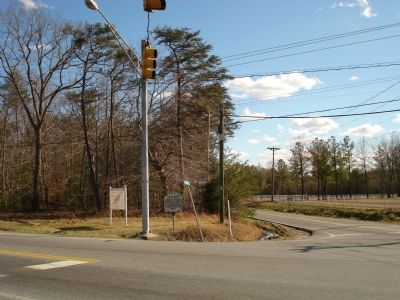 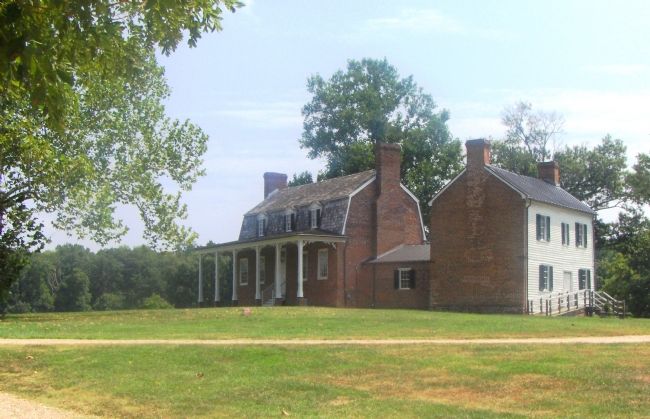 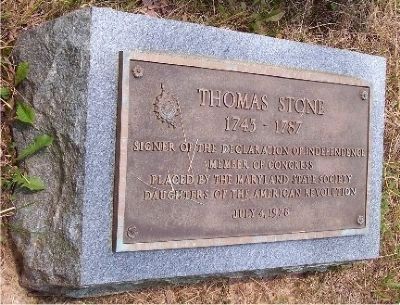 By M. A. Pimentel, circa 2006
4. Gravesite Marker at Haber de Venture
Thomas Stone
1743 - 1787
Signer of the Declaration of Independence
Member of Congress
Placed by the Maryland State Society
Daughters of the American Revolution
July 4, 1978 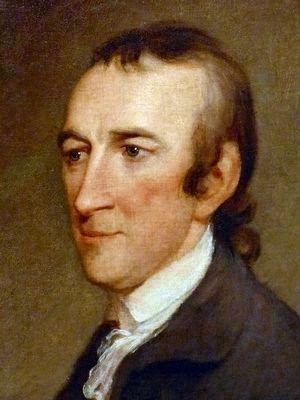 By Allen C. Browne, September 5, 2015
5. The Honorable Thomas Stone
This 1785 portrait of Thomas Stone by Robert Edge Pine hangs in the Museum of the Maryland Historical Society in Baltimore, Maryland.

“Thomas Stone (1743-1787), one of Maryland's four signers of the Declaration of Independence, was born to a prominent family in Charles County. After studying law in Annapolis, he established his practice in Frederick. When tensions with England developed, he initially wanted to negotiate diplomatically to avoid war. Over time, Stone came to see the necessity of American independence and served in the Maryland Senate from 1779 to 1784. His wife's ill-health began in 1776 and eventually led him to retire from much of public life.” — Maryland Historical Society
Credits. This page was last revised on November 22, 2019. It was originally submitted on May 5, 2007, by Roger Dean Meyer of Yankton, South Dakota. This page has been viewed 3,113 times since then and 65 times this year. Photos:   1, 2, 3. submitted on May 5, 2007, by Roger Dean Meyer of Yankton, South Dakota.   4. submitted on March 6, 2008, by M. A. Pimentel of Waldorf, Maryland.   5. submitted on November 7, 2015, by Allen C. Browne of Silver Spring, Maryland. • J. J. Prats was the editor who published this page.
Share This Page.