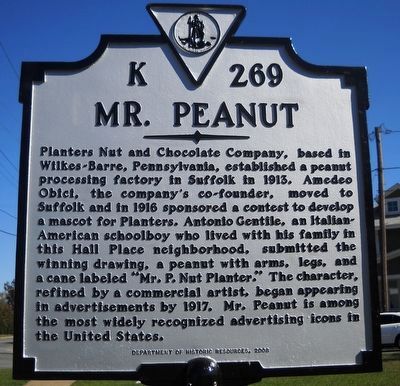 Photographed By Cynthia L. Clark, November 6, 2016
1. Mr. Peanut
Inscription.
Mr. Peanut. . , Planters Nut and Chocolate Company, based in Wilkes-Barre, Pennsylvania, established a peanut processing factory in Suffolk in 1913. Amedeo Obici, the company’s co-founder, moved to Suffolk and in 1916 sponsored a contest to develop a mascot for Planters. Antonio Gentile, an Italian-American schoolboy who lived with his family in this Hall Place neighborhood, submitted the winning drawing, a peanut with arms, legs, and a cane labeled “Mr. P. Nut Planter.” The character, refined by a commercial artist, began appearing in advertisements by 1917. Mr. Peanut is among the most widely recognized advertising icons in the United States. . This historical marker was erected in 2016 by Department of Historic Resources. It is in Suffolk Virginia

Planters Nut and Chocolate Company, based in Wilkes-Barre, Pennsylvania, established a peanut processing factory in Suffolk in 1913. Amedeo Obici, the company’s co-founder, moved to Suffolk and in 1916 sponsored a contest to develop a mascot for Planters. Antonio Gentile, an Italian-American schoolboy who lived with his family in this Hall Place neighborhood, submitted the winning drawing, a peanut with arms, legs, and a cane labeled “Mr. P. Nut Planter.” The character, refined by a commercial artist, began appearing in advertisements by 1917. Mr. Peanut is among the most widely recognized advertising icons in the United States.

Topics and series. This historical marker is listed in this topic list: Industry & Commerce. In addition, it is included in the Virginia Department of Historic Resources series list. A significant historical year for this entry is 1916. 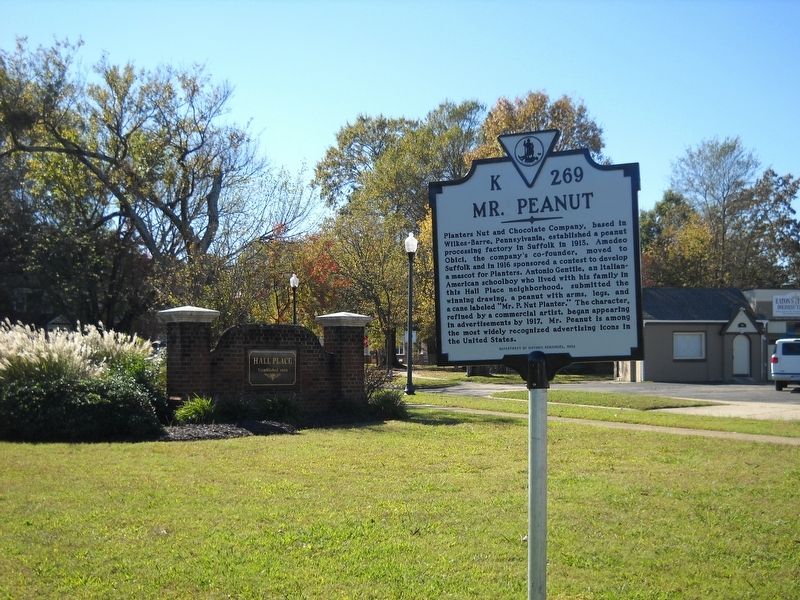 Click or scan to see
this page online
and South Main Street, on the right when traveling east on Hall Avenue. The marker stands on a park area surrounded by Hall Avenue as the main throughway, South Main Street on the west, Cedar Street to the east, and Johnson Avenue at the south. Touch for map. Marker is in this post office area: Suffolk VA 23434, United States of America. Touch for directions.

Regarding Mr. Peanut. The Hall Place neighborhood is adjacent to the Planters factory and its facilities. A statue of Mr. Peanut is a short distance away from this marker, across the railroad tracks, in downtown Suffolk (see photo No. 4).

This inspired the young Amedeo to get a fruit 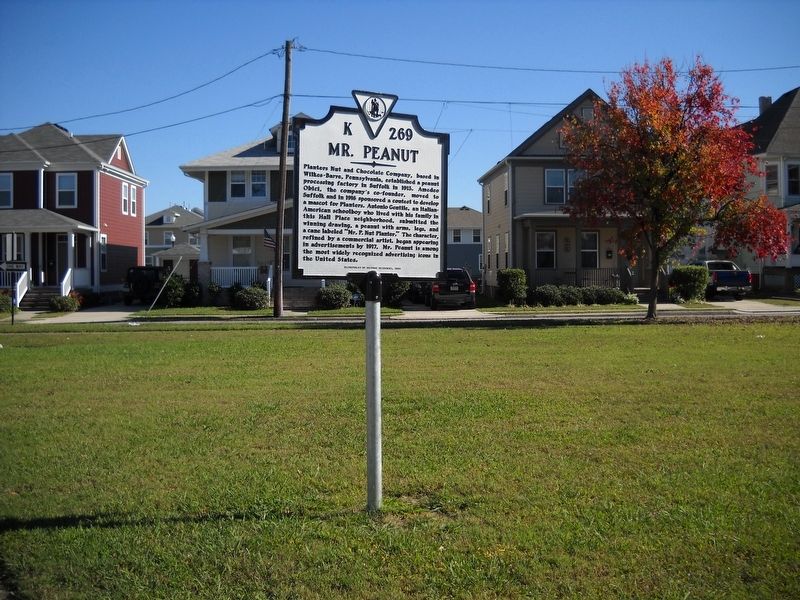 Photographed By Cynthia L. Clark, November 5, 2016
3. Beyond the houses, an eastward view, is Kraft Planters factory.
stand of his own with a peanut cart and a cheap roaster that he modified himself from scrapyard parts. He added a steam whistle so his cart would go off like a tea kettle when the roasting was done and an automated stirring mechanism which allowed him to focus on his customers without concern that the peanuts would burn. Showing an early understanding of marketing that would soon blossom into the dandiest of anthropomorphic peanuts, Obici called himself “The Peanut Specialist” and was soon doing very brisk business from the back of a horse-drawn wagon. By the time he was 18 years old in 1895, Amedeo had saved enough money to bring his mother and siblings to live with him in the United States and still had money left over to buy his own restaurant that specialized in roasted nuts and, weirdly, oyster stew.

[1941] was a heady time in the peanut boomtown. Peanuts were the dominant cash crop. They were grown, harvested, sorted, stripped of their shells and skin, salted, vacuum-packed, covered in chocolate and pressed into oil and peanut butter. The city was loaded with peanut operations — farmers, pickers, shellers and processors. A Suffolk radio station, on the air until the mid-1990s, had the call 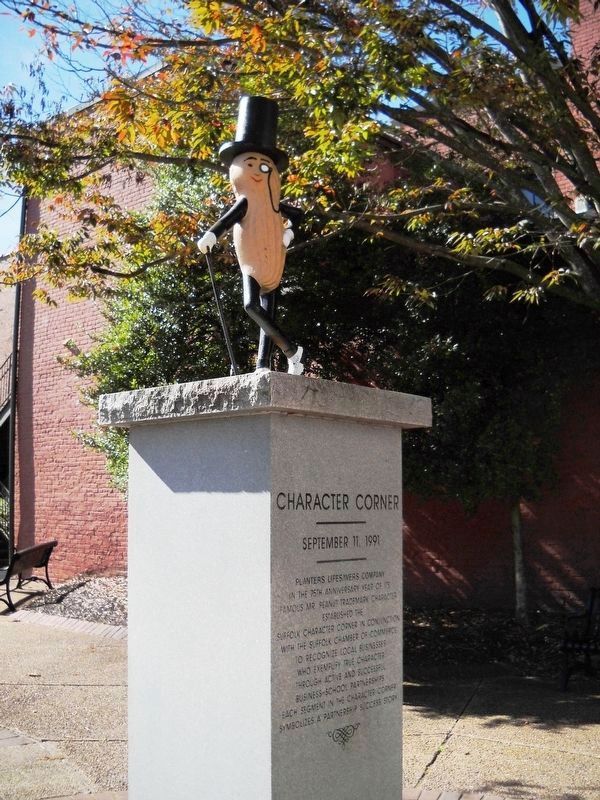 In 1916, Planters Nut and Chocolate Company ran a contest for a trademark. Antonio Gentile, a resident of Suffolk, Virginia, the peanut-growing capital of the state, began sketching possible entries for the contest. He drew a friendly, humanized peanut tumbling, serving nuts, and walking with a dignified cane.

In the Super Bowl commercial, [Wesley] Snipes is speaking at the character’s funeral, which is attended by several commercial icons, including Mr. Clean and the Kool-Aid Man, who sheds a tear 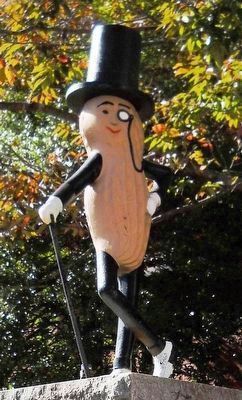 Photograph by Cynthia L. Clark, November 7, 2016
5. Mr. Peanut statue in downtown Suffolk
of sadness that falls on the soil where Mr. Peanut is buried. The Kool-Aid tear causes a plant to immediately sprout and a baby Mr. Peanut is born! ... “Where’s my monocle?” the baby says as the commercial comes to a close.

Additional commentary.
1. A Bit of This Historical Marker’s History
On November 9, 2016, when the “Mr. Peanut” marker was submitted to this database, the year 2008 imprinted below its inscription, was recorded as the erection date. Subsequent additional research, however, revealed that that date is historically incorrect. “Mr. Peanut” was actually erected in 2016, probably near the end of September.

The eight-year discrepancy is seemingly due to the fact that a similar commemorative marker was produced in 2008. That marker, “Mr. Peanut-World Icon,” according to the Virginia Department of Historic Resources (DHR), was approved but never erected because its sponsorship fell through. Nevertheless, there exists, as of December 15, 2016, two images of a Mr. Peanut icon marker in media circulation.

Both images are linked to 2008 as a DHR year of approval. Their inscriptions, however, contain variances. See the photo No. 8 of “Mr. Peanut-World 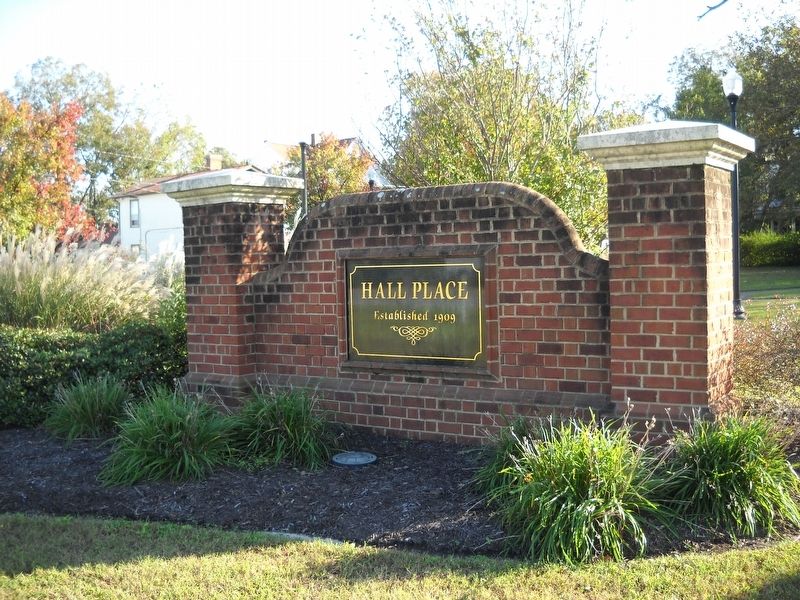 Photographed By Cynthia L. Clark, November 7, 2016
6. The Hall Place neighborhood was established in 1909.
Icon” and its inscription.

Most people, especially the ones who may visit the erected “Mr. Peanut” marker, will not necessarily know about this part of its history. But for those viewers who happen upon this database, an extra nibble to the “Bite-size Bits of Local, National, and Global History” is here for them.
— Submitted December 16, 2016, by Cynthia L. Clark of Suffolk, Virginia.
2. Regarding some factual inaccuracies in the marker's text
Unfortunately, this historical marker is wrought with some factual inaccuracies that were never properly vetted by the Virginia Department of Historic Resources. Chief amongst these is the fact that at no time was a contest ever held by Amedeo Obici nor by Planters Nut and Chocolate Company in order to develop a mascot for the company, as Mr. Obici had already seen an anthropomorphic peanut as far back as 1902, in both Good Housekeeping and The Richmond Times-Dispatch, and he knew exactly what he wanted for his company. He just needed to own it as his own and not be sued for purloining someone else’s work.

To that end, he asked the young boy whom had known well, as he had weekly Sunday dinners at the Gentile home for many months before he married in 1916, to make some drawings of an anthropomorphic peanut 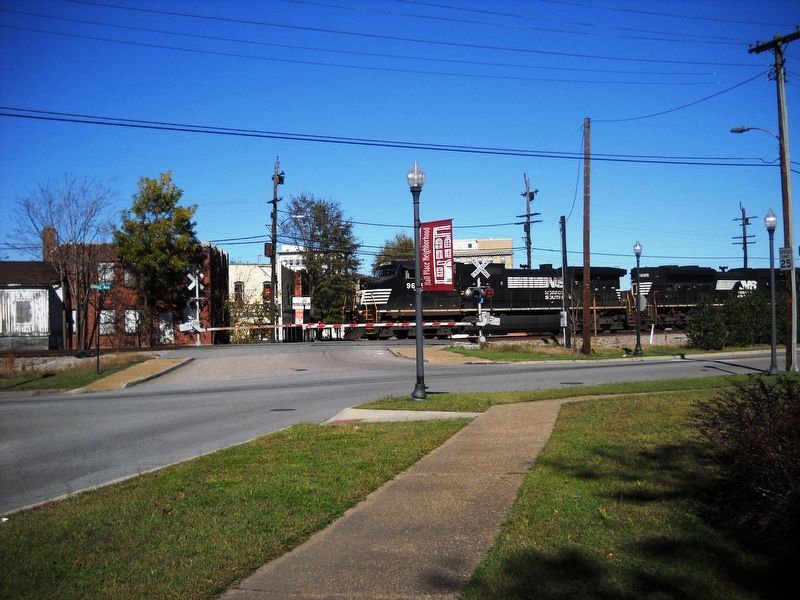 Photographed By Cynthia L. Clark, November 5, 2016
7. Downtown Suffolk is north of Mr. Peanut across the railroad tracks.
for him, for which he paid him $5. Obici then took the drawings to his own in-house commercial artist, Frank P. Krize, who at the time was still working in Wilkes-Barre, to gussy up the images.

Initially, Krize turned to local artist Elmer Cecil Stoner, whose sole effort debuted in The Day, New London, Connecticut's daily on July 24, 1917. That single ad was met with Obici's resounding disapproval. Krize took over and another ad was printed on October 16, 1917, more to Obici’s liking and more familiar to the Mr. Peanut who would come later.

It is telling that, despite Gentile's contributions—however they might have been perceived by anyone—neither he nor his family thought much of the drawings, if anything at all. In 1939, when the young doctor died of a heart attack at the age of 36, in Newport News, the obituary penned by his family mentioned nothing about his role in the creation of one of the most iconic brand images in the world. In the Suffolk News-Herald, owned by Obici himself, the front page news story about Gentile's death, waxes eloquently about his high school honors and leadership, but not a word about Mr. Peanut.

A few years later, on October 27, 1942, in a special “200th Anniversary of Suffolk” edition of that same paper still owned by Obici, in a stand alone section devoted to Planters stated clearly “an employee created 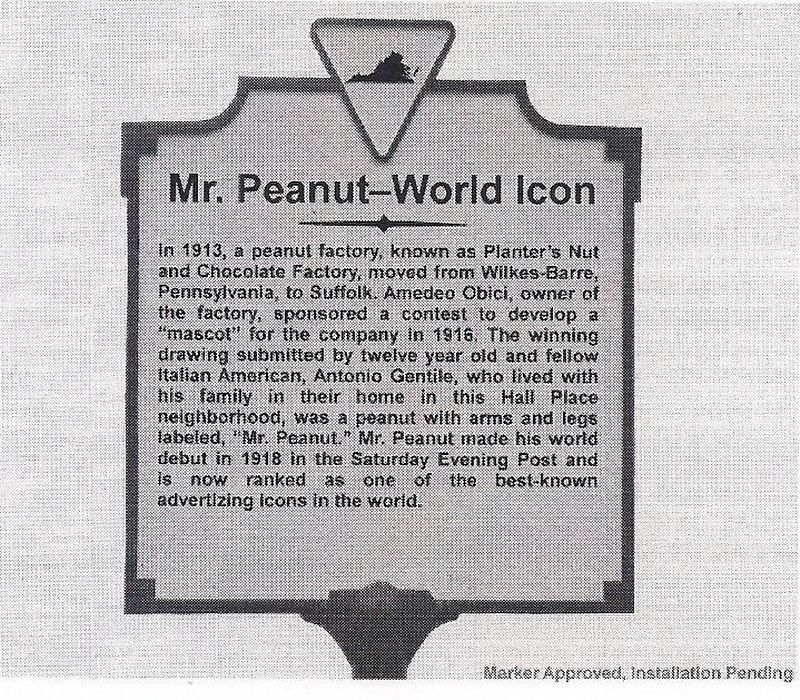 Screen shot by Cynthia L. Clark
8. Mr. Peanut-World Icon (Courtesy of markerhistory.com).
This photo of the “Mr. Peanut-World Icon” marker is a screen print captured on December 8, 2016 from markerhistory.com. “Mr. Peanut-World Icon” was approved in 2008 but never erected. Read more under commentary. INSCRIPTION: In 1913, a peanut factory, known as Planter’s Nut and Chocolate Factory, moved from Wilkes-Barre, Pennsylvania, to Suffolk. Amedeo Obici, owner of the factory, sponsored a contest to develop a “mascot” for the company in 1916. The winning drawing submitted by twelve year old and fellow Italian American, Antonio Gentile, who lived with his family in their home in this Hall Place neighborhood, was a peanut with arms and legs labeled, “Mr. Peanut.” Mr. Peanut made his world debut in 1918 in the Saturday Evening Post and is now ranked as one of the best-known advertising icons in the world.
Mr. Peanut.” This was written by the newspaper’ editor, Lyman Barrett, not some flack or cub reporter. No mention of Gentile or of a contest. During a popular radio serial, Cavalcade of America, a show that ran for over 20 years on radio, as well as television, this same history was reinforced, as Don Ameche portrayed Obici in the “Peanut Vendor” episode, that aired on April 14, 1947.