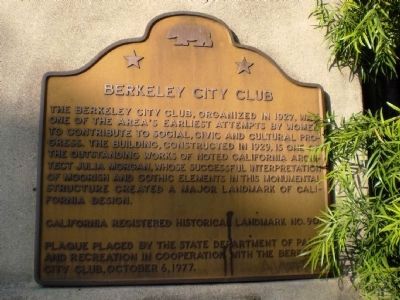 The Berkeley City Club, organized in 1927, was one of the area’s earliest attempts by women to social, civic and cultural progress. The building, constructed in 1929, is one of the outstanding works of noted California architect Julia Morgan, whose successful interpretation of Moorish and Gothic elements in this monumental structure created a major landmark of California design. Plaque placed by the State Department of Parks and Recreation in cooperation with the Berkeley City Club, October 6, 1977.

Erected 1977 by California State Department of Parks and Recreation, in cooperation with the Berkeley City Club. (Marker Number 908.) 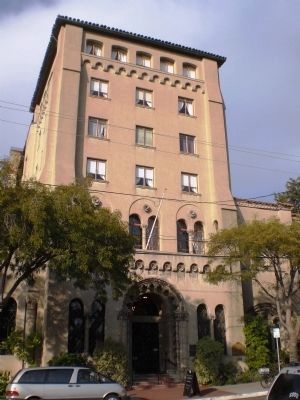 More about this marker. This is a California Registered Historical Landmark, No. 908. The marker is on the right-hand side of the front entrance.

Regarding Berkeley City Club. The building, built along Gothic Romanesque lines with Moorish influences, opened in 1930, and became the home of the Berkeley Women's City Club, then having a membership of more than 4,000. The building still functions as a guest house and dining facility. The building is a City of Berkeley Landmark and a California Historic Landmark, and is on the National Register of Historic Places (#77000282), as well. 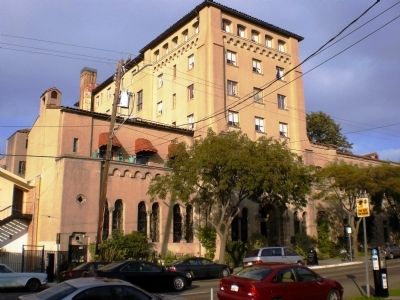 December 7, 2008
3. Berkeley City Club
. Daniella Martin's lovingly detailed history of the building, including many photos of comparing the building as it was with how it looks now. (Submitted on February 5, 2009.)

Topics. This marker is included in these topic lists: Fraternal or Sororal Organizations • Notable Buildings
Credits. This page was last revised on July 26, 2018. This page originally submitted on February 5, 2009, by Andrew Ruppenstein of Sacramento, California. This page has been viewed 2,322 times since then and 26 times this year. Last updated on December 20, 2016, by Michael Kindig of Long Beach, California. Photos:   1, 2, 3. submitted on February 5, 2009. • Syd Whittle was the editor who published this page.
Share This Page.