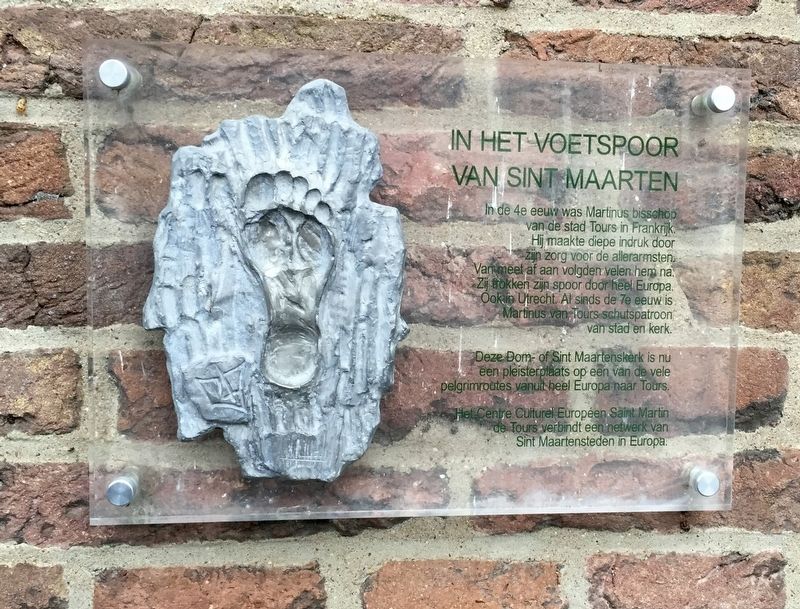 In the 4th century, Martin was the bishop of the city of Tours in France. Making a deep impression by his care for the poorest, from the outset he inspired many to follow his trail throughout Europe, including Utrecht. Since the 7th century, St. Martin of Tours has been Utrecht's patron saint for both the city and the church.

The St. Martin's Cathedral is a waypoint on one of the many pilgrimage routes from anywhere in Europe to Tours. 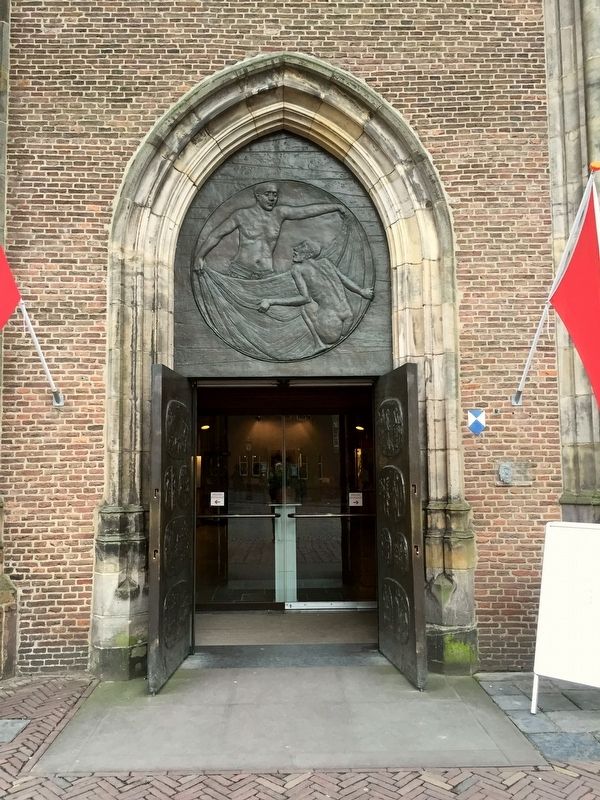 By Andrew Ruppenstein, November 23, 2016
2. In Het Voetspuur Van Sint Maarten / In the Footsteps of Saint Martin Marker - Wide View
The marker is visible here to the right of the entrance.

Location. 52° 5.436′ N, 5° 7.317′ E. Marker is in Utrecht. Marker can be reached from the intersection of Domplein and Korte Nieuwstraat. Touch for map. Marker is in this post office area: Utrecht 3512, Netherlands. Touch for directions. 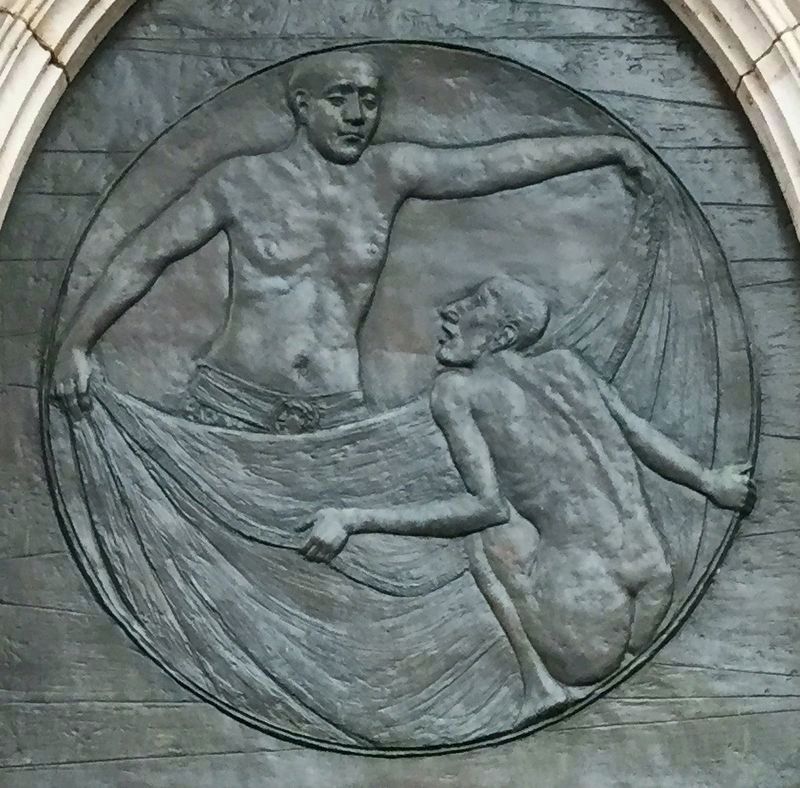 By Andrew Ruppenstein, November 23, 2016
3. St. Martin's Cathedral - Detail Above Door (See Photo 2)
A modern depiction of St. Martin's sharing of his cloak, by Theo van de Vathours. The legend of Martin's Cloak (Wikipedia): While Martin was a soldier in the Roman army and stationed in Gaul (modern-day France), he experienced a vision, which became the most-repeated story about his life. One day as he was approaching the gates of the city of Amiens, he met a scantily clad beggar. He impulsively cut his military cloak in half to share with the man. That night, Martin dreamed of Jesus wearing the half-cloak he had given away. He heard Jesus say to the angels: "Martin, who is still but a catechumen, clothed me with this robe." (Sulpicius, ch 2). In another version, when Martin woke, he found his cloak restored to wholeness. The dream confirmed Martin in his piety, and he was baptised at the age of 18....
. Saint Martin of Tours has been part of Europe's collective memory since the fourth century. A tireless traveller around Europe for his entire life, this European ahead of his time, who symbolises the universal value of sharing, was born in 316 in Pannonia, now Hungary, to pagan parents. Having been raised in Pavia, Italy, where his father served in the Roman army, he himself was enrolled in the army at the age of about fifteen. In 337, while stationed in Amiens, France, he cut his cloak in two to give half to a poor man who was dying of cold. His faith was then revealed to him and he became a Christian. Living as a hermit near Poitiers, he established a monastery in Ligugé, the first in the Western world. He became a bishop in 371; he founded the abbey of Marmoutier and the first rural churches in Gaul, while travelling extensively throughout part of Europe. Saint Martin died on 8 November 397 in Candes and was buried on 11 November in Tours. (Submitted on December 24, 2016.) 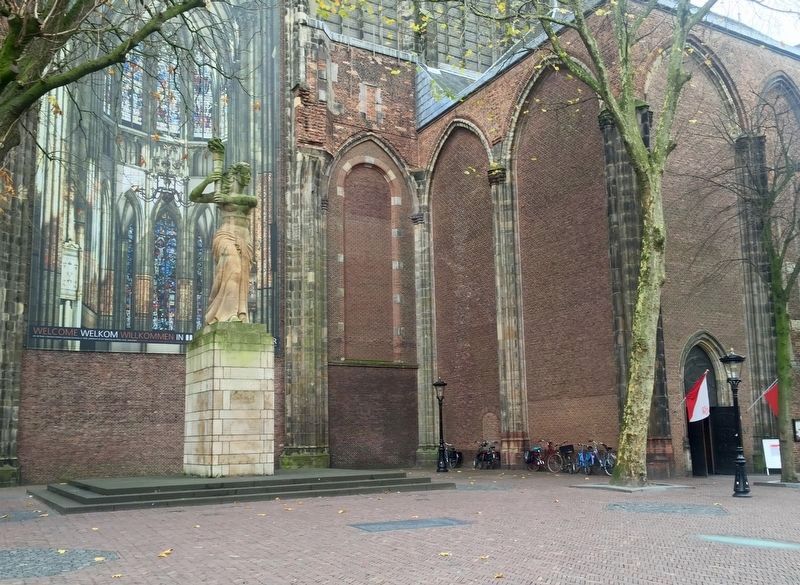 By Andrew Ruppenstein, November 23, 2016
4. In Het Voetspuur Van Sint Maarten / In the Footsteps of Saint Martin Marker - Wider View
A more general view of part of the Domplein (Cathedral Square), showing the Utrecht Sodomy Trials marker (in the pavement), the Resistance Monument behind that, and the Footsteps marker on the very right, by the red and white flags, all backed by the Cathedral itself. Two additional historical visual cues are to be seen - the painting of the nave (as it would have appeared in the 17th Century), open to the air, and the different colored paving stones visible on the plaza, which allude to the outline of the nave prior to its collapse in 1674. circa 1907
5. Domkerk, or St. Martin's Cathedral - Postcard View from the Dom Tower
The Footsteps marker site would be just to the right of the entrance on the right side of the photograph, while the Sodomy Trials marker and Resistance monument would be where the people are standing. (See Photo 4.)

St. Martin's Cathedral, Utrecht, or Dom Church (Dutch: Domkerk), was the cathedral of the Diocese of Utrecht during the Middle Ages. Once the Netherlands' largest church, dedicated to Saint Martin of Tours, it is the country's only pre-Reformation cathedral. It has been a Protestant church since 1580. The building is the one church in the Netherlands that closely resembles the style of classic Gothic architecture as developed in France. All other Gothic churches in the Netherlands belong to one of the many regional variants. Unlike most of its French predecessors, the building has only one tower, the 112-metre-high (367 ft) Dom Tower, which is the hallmark of the city....In 1674 the central portion of the cathedral with the nave collapsed in a storm, a tornado ripped through Utrecht causing many to die and split the cathedral in two. It has never been rebuilt, leaving the tower now isolated from the east end. -- Wikipedia
Credits. This page was last revised on December 24, 2016. It was originally submitted on December 24, 2016, by Andrew Ruppenstein of Sacramento, California. This page has been viewed 222 times since then. Photos:   1, 2, 3, 4, 5. submitted on December 24, 2016, by Andrew Ruppenstein of Sacramento, California.
Share This Page.