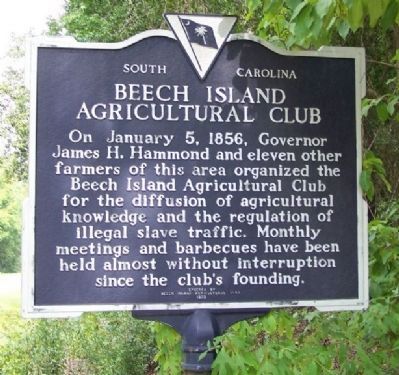 On January 5, 1856, Governor James H. Hammond and eleven other farmers of this area organized the Beech Island Agricultural Club for the diffusion of agricultural knowledge and the regulation of illegal slave traffic. Monthly meetings and barbecues have been held almost without interruption since the club's founding.

Reverse:
In 1883 E. Spann Hammond donated to the Beech Island Agricultural Club a four-acre circular tract of land located less than a mile north of this site. The original clubhouse was destroyed by fire on August 7, 1967. The site of the building is marked by a dedicatory plaque. The new club house was dedicated in June 1968.

Topics. This historical marker is listed in these topic lists: Agriculture • Landmarks • Notable Places. A significant historical month for this entry is January 1934. 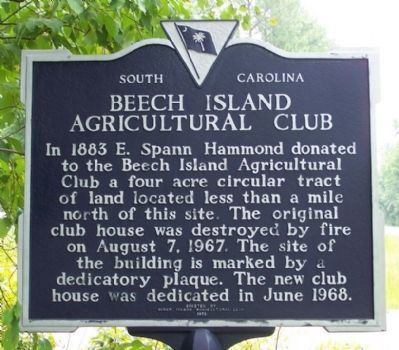 Click or scan to see
this page online
in Beech Island, South Carolina, in Aiken County. Marker was on Williston Road (U.S. 278) just west of Spann Hammond Road, on the right when traveling west. Touch for map. Marker was in this post office area: Beech Island SC 29842, United States of America. Touch for directions.

Regarding Beech Island Agricultural Club. Beech Island Agricultural Club is one of the oldest surviving societies in the State of South Carolina and possibly one of the oldest in the South. Except for a period of one month near the end of the War Between the States, the club has not missed a monthly meeting for over one hundred and forty years. Formed in 1846 near Silver Bluff, the club was designed to address the many things happening that would have a profound effect 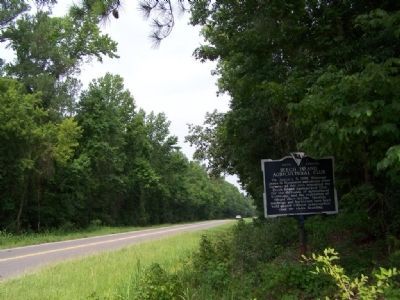 Photographed By Mike Stroud, July 25, 2008
3. Beech Island Agricultural Club Marker looking west along US 278
on the plantation economy of the area.

In August of 1856, club member, Samuel Clarke, conveyed to the club a half acre of land where the original club house was built. It was built of vertical clapboards of heart pine and cypress shingles. Before this building was set afire by an arsonist on August 10, 1967, insightful members removed the treasure trove of valuable pictures and documents to the attic of member, Frank Atkinson, for safe-keeping thus preserving volumes of Beech Island history.

Among documents owned by the club is General Order #9. It was General Robert E. Lee's farewell address to his troops. Signed and presented by General Lee himself to club member, William H. Atkinson, the document has been the property of the club since 1909. (PBS Television recently completed filming a feature of this document in Beech Island. The present building is built of concrete blocks with steel sash windows and is an able host to the myriad of valuable photos and documents that adorn its walls. Today, with a membership of 125 and a waiting list, the Beech Island Agricultural Club continues its rich historic heritage and traditions that were set by the founding members over a hundred and forty years earlier. 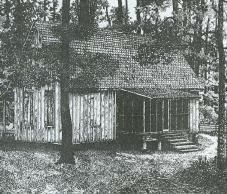 2. General Lee's Farewell Address. In the archives of a gentleman's club in this rural town is what is believed to be a signed copy of one of the most famous documents in the history of the Civil War — Confederate General Robert E. Lee's farewell address, "General Order #9," composed at Appomattox, Virginia, upon the surrender of his troops in April 1865. (Submitted on March 15, 2009, by Brian Scott of Anderson, South Carolina.)

3. History's Detectives: General Robert E. Lee's Farewell Address. In the archives of a gentleman's club in this rural town is what is believed to be a signed copy of one of the most famous documents in the history of the Civil War — Confederate General Robert E. Lee's farewell address, "General Order #9," composed at Appomattox, Virginia, upon the surrender of his troops in April 1865. (Submitted on January 9, 2011, by Brian Scott of Anderson, South Carolina.) 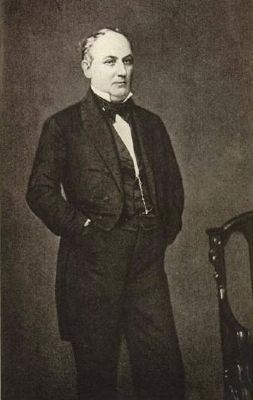 Photographed By Brian Scott
5. James H. Hammond
1807-1864
U.S. House of Rep from S.C. 1835–1836
Gov of South Carolina 1842–1844
U.S. Sen from S.C. 1857–1860
It was Hammond who popularized the phrase "Cotton is King" in an 1858 speech to the Senate.
fertilizers, new crops, and the like -- but its primary purpose was to keep slaves in line. The phrase "the regulation of illegal slave traffic," seems to refer to the international slave trade made illegal in 1808, but that's not what the "club" really sought to regulate at all. In fact, slaveowners founded the "society" as a "patroller" organization. What they wanted to stop was slaves who were moving about, going to town, and even making money by taking goods from the plantation and selling them.

Indeed, South Carolina laws in force from the 1690s required whites to organize patrol systems in all jurisdictions where blacks were a majority. In the Beech Island area in 1856 more than 60 percent of all people were enslaved. The patrol system confined slaves to their own plantation unless they had passes and specific errands. Even a wife visiting her enslaved husband on the next plantation had to have a written pass to see him. Patrollers -- volunteers and paid -- stopped all African Americans to ask their business and see their passes. (Source: Lies Across America by James W. Loewen, pg 248-249.)
— Submitted March 15, 2009, by Brian Scott of Anderson, South Carolina.
2. James H. Hammond
As a congressman before his election as governor, James Hammond had made headlines by advocating the death penalty for abolitionists to keep their ideas out of the state and away from slaves.

Hammond theorized that slavery was appropriate for blacks because, among other reasons, it controlled their otherwise untamed carnal instincts, an irony in light of his own inclinations. He had sex with his wife, his wife's sister's four young daughters, his slave mistress sally Johnson, her twelve-year-old daughter Louisa, at least two white men according to historian Martin Duberman, and perhaps other women and male slaves. Nevertheless he was a stern moralist toward his slaves. If a slave couple wanted to divorce they had to convince him that sufficient cause existed; even then, each got a hundred lashes and could not marry for three years...His reputation for cruelty lasted more than a century in the black community. (Source: Lies Across America by James W. Loewen, pg 249-251.)
— Submitted March 15, 2009, by Brian Scott of Anderson, South Carolina.
3. The truth need not be hidden, tell ALL of it!
My great grandfather and great great grandfathers were overseers for Henry Hammond before and during the War, and the quotes attributed to the author of the obviously politically correct, but outright untruthful, book are, quite simply, LIES!

I have a copy of the handwritten instructions given to my ancestors by Gov. Hammond, and know for a fact that these little tidbits represented here are entirely taken out of context. Yes, slaves were to receive a beating if divorced, but a white woman could be beaten by her husband legally in South Carolina at the time, as long as it was on Sunday, in full view of the public, at the courthouse!

When Gov. Hammond's slaves were wed, they were given what would today be considered wedding gifts by the Governor. There was a daycare, medical expertise available (Gov. Hammond himself was rather sickly and well schooled in the practice of Homeopathy), prescribed maintenance each Spring of the dwellings, involving painting, or "whitewashing”, scrubbing down and replacing the bedding. Mothers were given a layette for each newborn child, and slaves even went to town three days a year and went Christmas shopping! Slaves were allowed to have gardens, chickens, etc. and the harshest admonishment was to the overseers, not the slaves. This was that an overseer should NOT be whipping the slaves.

However, divorce was looked upon as a terrible sin and seen as contributing greatly to the decline of morals and welfare of the slaves. In an effort to reduce the amount of promiscuity among the slaves and to discourage their marrying repeatedly to receive extra gifts, which would have been unfair to the morally upright men and women, whipping was threatened AS AN INCENTIVE to the slaves to work things out rather than face the consequences.

Hammond himself even made mention of his slave mistress in his will, holding her character beyond reproach in trusting her truthfulness when she said her children were his.

Hammond died during the last days of the War for Southern Independence, my great grandfather Bush Howard returned from a Northern prison and found the slaves in pitiful conditions on the plantation, and told them they were free and must leave; whereupon the majority of them cried pitifully and begged not to be sent away. Having no way of providing for even his own family in South Carolina (where Northern forces had killed every food source possible), Bush packed up his family and left for Georgia, WITH THE SLAVES FOLLOWING FREELY. He ultimately settled in the Emanuel and Johnson County, Georgia area, and so did the slaves.

When his daughter, my grandmother, died in the 1950's, the slaves' children (now very aged) and their families called upon her wake and were treated as family, and indeed, they grieved as if she had been one of their own children.

For proof of my statements, one needs only look in the Johnson and Emanuel population demographics, at the large percentage of Black citizens with the last name HOWARD.

Editor’s want-list for this marker. Picture of dedicatory plaque at the site of the original building. • Can you help?
Share this page.