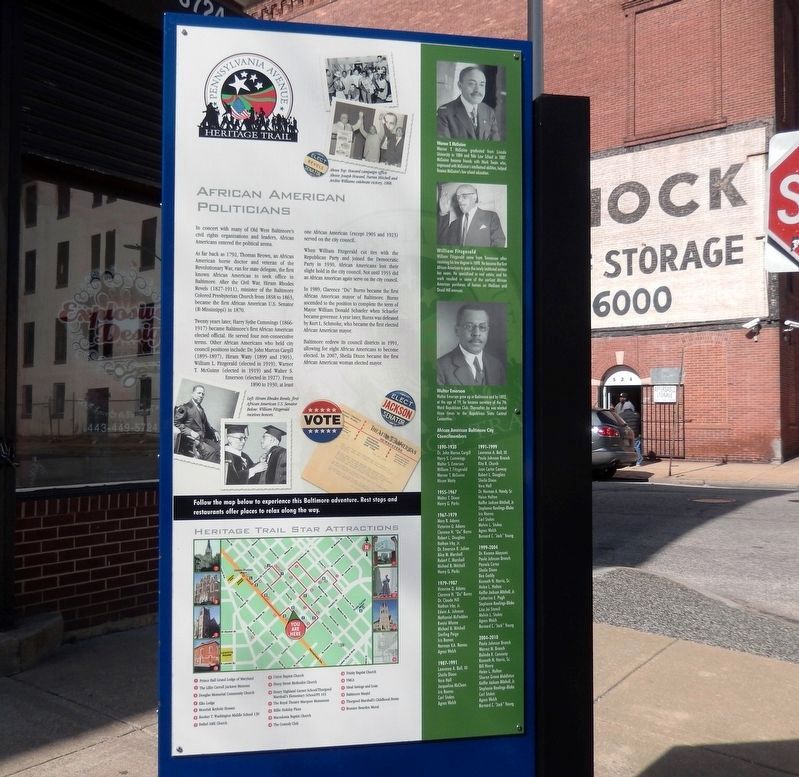 In concert with many of Old West Baltimore’s civil rights organizations and leaders, African Americans entered the political arena.

As far back as 1792, Thomas Brown, an African American horse doctor and veteran of the Revolutionary War, ran for state delegate, the first known African American to seek office in Baltimore. After the Civil War, Hiram Rhodes Revels (1827-1911), minister of the Baltimore Colored Presbyterian Church from 1858 to 1863, became the first African American U.S. Senator (R. Mississippi) in 1870.

When William Fitzgerald cut ties with the Republican Party and joined the Democratic Party in 1930, African 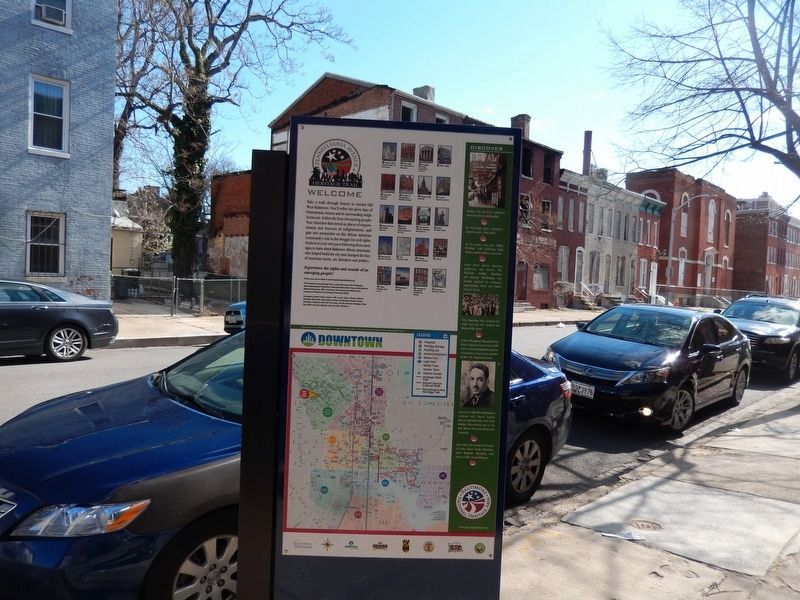 (Inscription below the images in the upper right)
Above Top: Howard campaign office, Above: Joseph Howard, Parren Mitchell and Archie Williams celebrate victory, 1968. 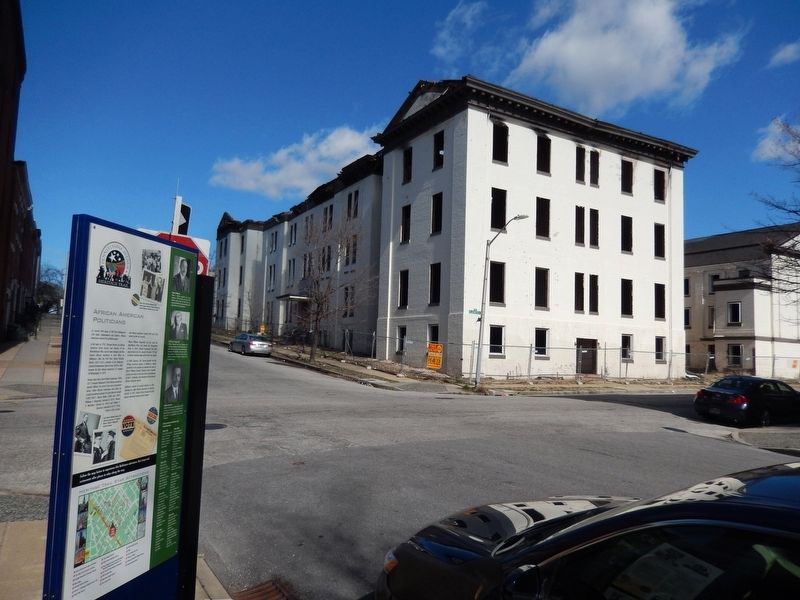 By Don Morfe, March 11, 2017
3. African American Politicians Marker-Old Provident Hospital in the background
after receiving his law degree in 1898. He became the first African American to pass the newly instituted written bar exam. He specialized in real estate, and his work resulted in some of the earliest African American purchases of home on Madison and Druid Hill avenues.

Walter Emerson
Walter Emerson grew up in Baltimore and by 1892, at the age of 19, he became secretary of the 7th Ward Republican Club. Thereafter, he was elected three times to the Republican State Central Committee.

Reverse Side of the Marker
Welcome
Take a walk through history in storied Old West Baltimore. You’ll relive the glory days of Pennsylvania Avenue and its surrounding neighborhoods. Follow the lives of inspiring people. Tour churches that served as places of empowerment and beacons of enlightenment, and gain new perspective on this African American community’s role in the struggle for civil rights. Explore at your own pace following these story signs to learn about Baltimore African Americans who helped build a city and changed the face of American music, art, literature and politics.

. Discover
(Inscriptions under the images)
*Listen, Can you feel it pulsating down the Street of Royalty?
*It’s bee-bop, jazz, comedy—and of course—the blues.
*All the greats were here. Billie Holiday, Cab Calloway, Fats Waller, Eubie Blake and more!
*Learn about African American politicians and lawyers like William Ashbie Hawkins and George McMechan who fought against on ordinance segregating whites and blacks block by block.
*Visit churches that nurtured the soul, and also fed, clothed and housed the poor.
*Follow Thurgood Marshall from Henry Highland Garnet School/PS 103, to winning landmark Supreme Court cases, to becoming a justice of the U.S. Supreme Court.
*Learn how Old West Baltimore residents and church leaders played a pivotal role in the Civil Rights Movement and in the Buy Where You Can Work jobs campaign.
*And walk in the creative footsteps of writer Zora Neale Hurston, artist Romare Breaden and actors at the Arena Players.

Topics and series. This historical marker is listed in these topic lists: African Americans • Civil Rights • Government & Politics. In addition, it is included in the Historically Black Colleges and Universities 🎓 series list.