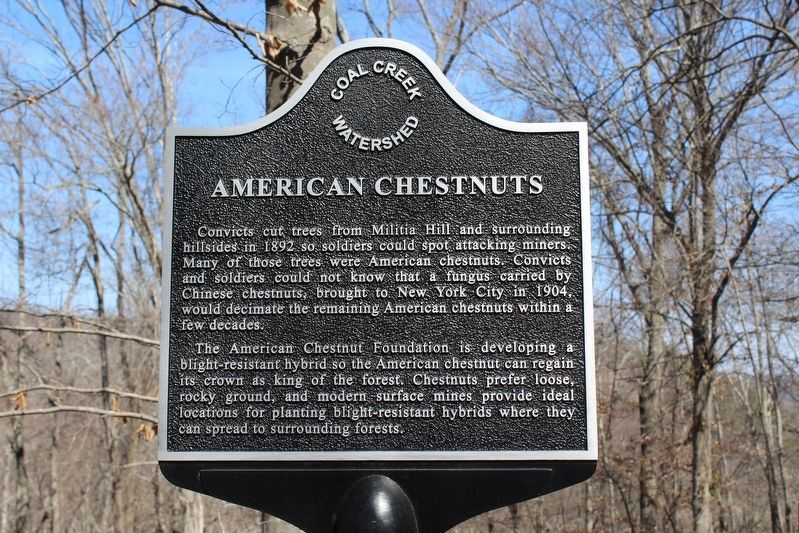 By Tom Bosse, March 4, 2017
1. American Chestnuts Marker
Inscription.
American Chestnuts. . Convicts cut trees from Militia Hill and surrounding hillsides in 1892 so soldiers could spot attacking miners. Many of those trees were American chestnuts. Convicts and soldiers could not know that a fungus carried by Chinese chestnuts, brought to New York City in 1904, would decimate the remaining American chestnuts within a few decades.

The American Chestnut Foundation is developing a blight-resistant hybrid so the American chestnut can regain its crown as king of the forest. Chestnuts prefer loose, rocky ground, and modern surface mines provide ideal locations for planting blight-resistant hybrids where they can spread to surrounding forests. . This historical marker was erected by Coal Creek Watershed Foundation. It is in Rocky Top in Anderson County Tennessee

Topics and series. This historical marker is listed in these topic lists: Horticulture & Forestry • Industry & Commerce. In addition, it is included in the Coal Creek Watershed Foundation series list.

Vowell Mountain Lane, on the left when traveling north. Touch for map. Marker is in this post office area: Lake City TN 37769, United States of America. Touch for directions.