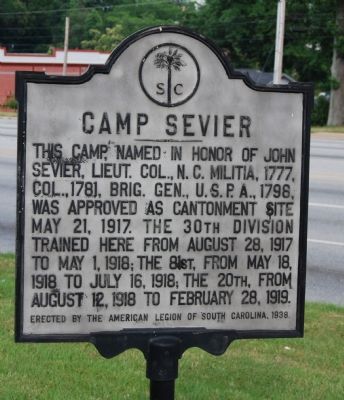 Topics. This historical marker is listed in these topic lists: War, US Revolutionary • War, World I.

Other nearby markers. At least 10 other markers are within 3 miles of this marker, measured as the crow flies. Rev. James R. Rosemond (approx. ¾ mile away); a different marker also named Camp Sevier 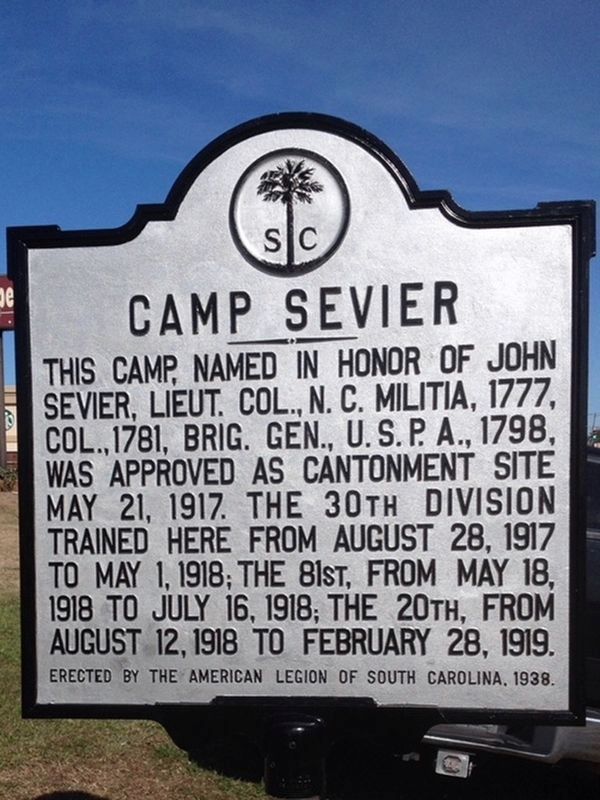 Regarding Camp Sevier. The camp was located near the intersection of Rutherford Street and Pine Knoll Drive. Hastily erected in 1917 to help America respond to the Allies' need for freshly trained troops for World War I, the camp was located 6 miles from Greenville and covered 1,900 acres. It included a hospital, drill grounds, bakery and barracks for the Army's 30th Infantry/Field Artillery Division. 80,000 men were trained here for World War I. Following basic training, soldiers were shipped from here to Charleston for combat in France. (Source: http://www.greenville.k12.sc.us/league/tourprt.htm.)

Camp Sevier was one of three training camps in South 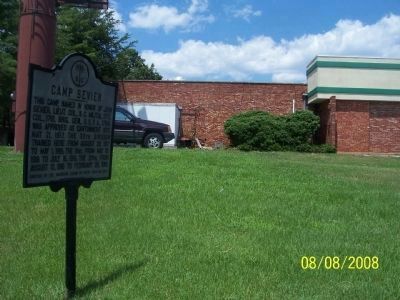 By M. L., August 8, 2008
3. Camp Sevier Marker
Carolina. The others were Camp Wadsworth and Camp Jackson, the only one of the three still in operation.

5. The Life of John Sevier Time Line. Including Family Origins 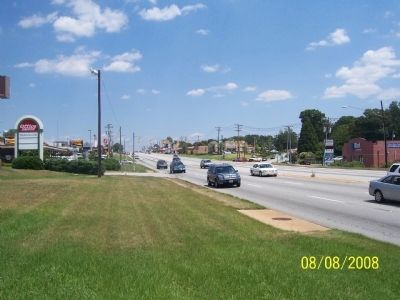 6. State of Franklin. The State of Franklin was an autonomous, secessionist United States territory created, not long after the end of the American Revolution, from territory that later was ceded by North Carolina to the federal government. (Submitted on February 2, 2009, by Brian Scott of Anderson, South Carolina.)

Additional comments.
1. About Camp Sevier
On 6 April 1917 the United States declared war on the Central Powers. Governor Manning moved swiftly to make sure that South Carolina did its part, but support for the war was not unanimous. In Lexington, Newberry, Orangeburg, and Charleston Counties there was strong antiwar sentiment among those of German and Irish descent. The week before war was declared, there were a preparedness parade in Columbia and an antiwar rally at the Lexington County courthouse. Federal authorities jailed the editor of the Abbeville Scimitar for questioning Wilson's motives for going to war and briefly banned the Charleston American from the mails for allegedly subversive comments. Cole Blease condemned the war and in a biting speech compared Manning to the Reconstruction governors. "Dick Manning is the 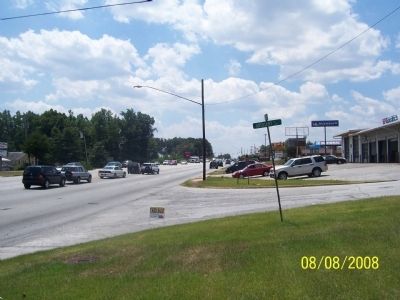 By M. L., August 8, 2008
5. View of Wade Hampton Blvd. from Camp Sevier Marker looking South
Notice the street sign in the foreground, Artillery Rd. Many of the streets in the area are named for emplacements that were located in the area when Camp Sevier was here.
worst governor the State ever had," he said, "worse than Scott, Chamberlain or Moses, because they only stole money and he is trying to steal the souls and bodies of your boys." Although he later recanted and supported the war, he had made a political blunder of the first order.

The State Council of Defense published a South Carolina Handbook on the War that reflected the zeal with which Americans went to war to overthrow "the barbarous rule of brutal Prussia." Either support the war or be labeled a traitor. There could be no middle ground: "Those who are not for us are against us." A corps of 200 business and civic leaders (called "Four Minute Men") were prepared to speak anywhere, anytime. The speakers' bureau, like much of the material in the pamphlet, was part of a coordinated national campaign to mobilize the home front. Carolinians, white and black, rallied to the flag, but because of Jim Crow all war support activities (Red Cross, bond drives, victory gardens) were segregated. Some 307,000 young men registered for the draft; of these, 54,000 were drafted. Patriotic fund drives raised nearly $100 million ($1 billion). On a per capita basis, the state's financial support of the war effort was among the highest in the nation. And after a half century white Carolinians once more celebrated the Fourth of July.

The onset of war made civic leaders anxious to have 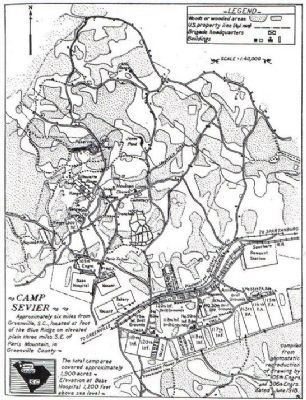 By Brian Scott
6. Map of Camp Sevier
military bases located near their towns. Greenville and Columbia had learned during the Spanish-American War how much money military installations could pump into a community. A combination of local initiative and the state's political influence with the Wilson administration resulted in the authorization for army training bases at Camp Jackson (Columbia), Camp Sevier (Greenville), and Camp Wadsworth (Spartanburg). The Marine Corps facility at Paris Island and the Charleston Navy Yard bustled with increased activity. Concern for servicemen's health led to federal pressure that closed down heretofore tolerated red-light districts in Charleston and Columbia.

The state's national guard units were incorporated into the 30th (Old Hickory) Division that trained at Camp Sevier. Many Carolinians were members of the 81st (Wildcat) and the 371st Regiment, 93d (Negro) divisions that trained at Camp Jackson. All these units saw action in France, the 81st and 93d along the Hindenburg Line near Bellincourt. The state's servicemen distinguished themselves on the battlefield. Of the seventy-nine Medals of Honor awarded for conduct "above and beyond the call of duty," seven went to South Carolinians. Among the heroes were James Dozier of Rock Hill, who later served as the state's adjutant general for thirty three years, and Freddy Stowers of Sandy Springs, who was the only black American 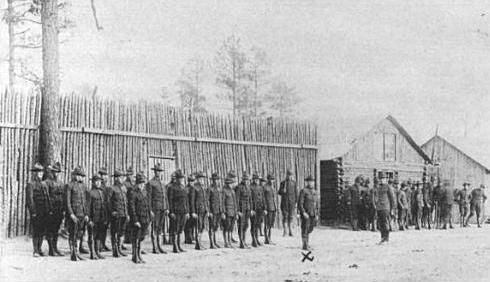 Special Collections, South Carolinian Library, USC Columbia, circa 1918
7. Camp Sevier
The "X" was placed by Sergeant George Haughter so that he could be easily identified by the family.
to receive the medal in either world war. (Source: South Carolina: A History by Walter Edger (1998), pgs 476-477.)
— Submitted September 13, 2009, by Brian Scott of Anderson, South Carolina. 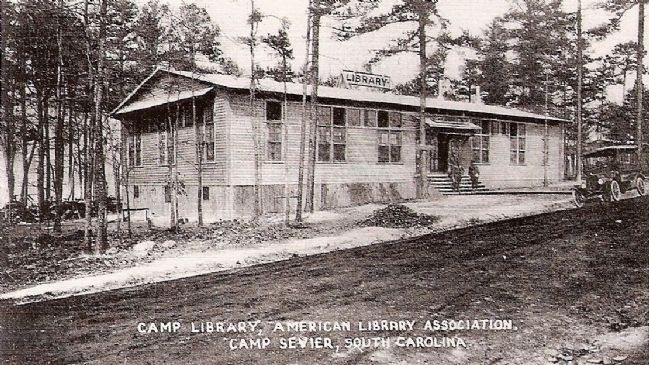 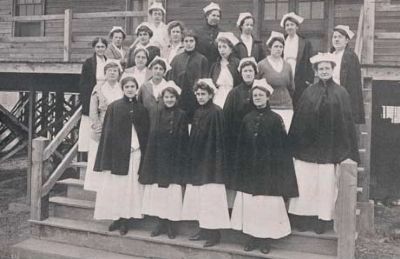 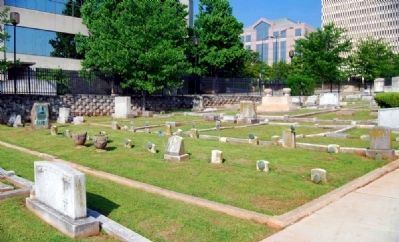 By Brian Scott, May 9, 2009
10. World War I Plot -
Springwood Cemetery, Greenville, SC
The first soldier to be buried in the plot was Fred Kirk (11/07/1917). Also buried in the plot are twenty soldiers from Camp Sevier that died during the Spanish influenza epidemic in 1918. The Greenville News reported the "caskets were stacked like cordwood at the depot" as a result of the outbreak. 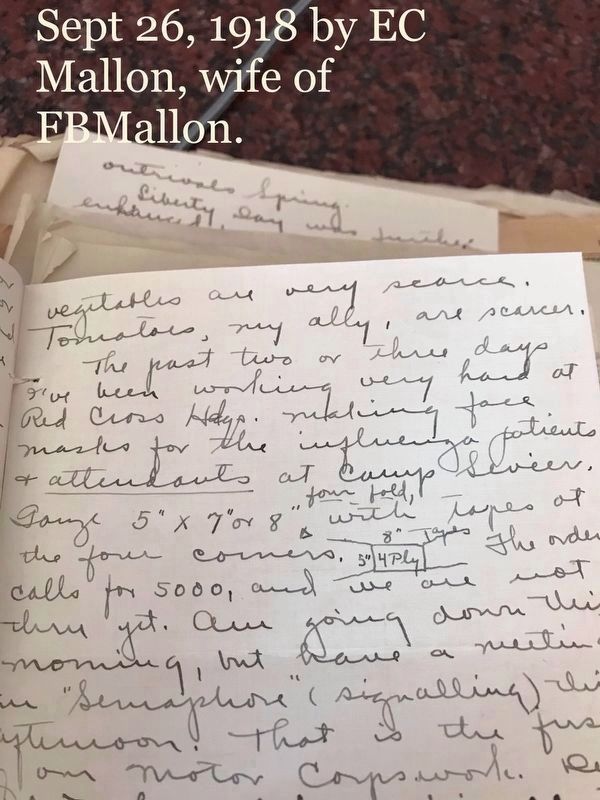 By Cynthia, February 27, 2020
11. Camp Sevier Marker
Letter home regarding Eunice’s work at the Red Cross HQ to supply bandages to Camp Sevier to help contain spread of the 1918 Spanish Influenza. 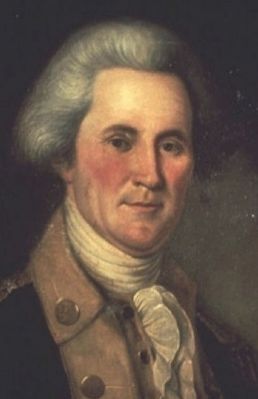 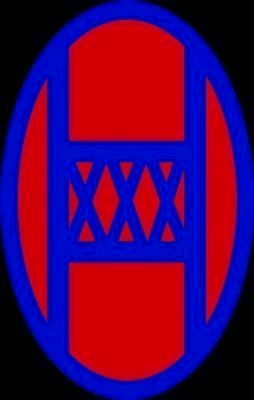 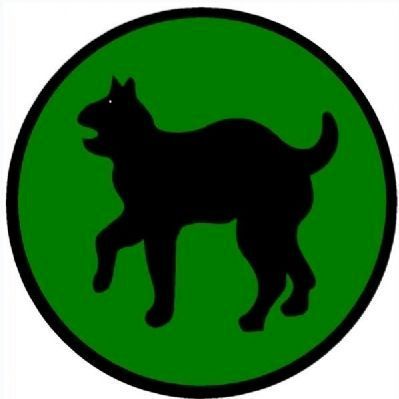